In early February NZTA awarded the contract to construct the next stage of Auckland’s Western Ring Route – upgrading the Northwestern Motorway (State Highway 16) between the St Lukes Road and Great North Road interchanges.  The $70m project is jointly funded by the NZ Transport Agency and Auckland Transport. (Transport blog reported on the widening of the St Lukes interchange here) 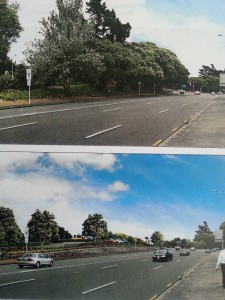 As part of the project AT and NZTA want to widen Great North Road to provide an extra lane turning onto a newly widened St Lukes overbridge and to feed a two lane motorway onramp . Last year AT sought the Waitemata Local Board’s consent to remove 6 mature pohutukaka trees on Council land opposite MOTAT on Great North Road to create an additional lane (I reported on this in September here).

The Board declined consent but approved for the trees to be trimmed as part of stage one of the project (allowing for the Great North Road lane to be raised to meet the height of the new St Lukes Bridge). The conditions of this approval were confirmed by the Manager – Local and Sports Parks Central (acting under delegated authority) including a request to prioritise cycling and pedestrian improvements as part of the Great North Road corridor management plan that is underway. See the details below

A a meeting on 19 February AT confirmed it is going ahead with seeking a notified resource consent to remove the trees. The public will now have a say in whether AT and NZTA have made a case for widening Great North Road. I certainly don’t think they have and the proposed design is a very poor outcome for PT users, walkers and cyclists.

I refer to your application for landowner approval for works within 820 Great North Road, Grey Lynn. The following approvals were sought from both Auckland Transport and New Zealand Transport Agency:

–       Temporary use of open space land designated as D06-08 at 820 Great North Road to carry out earthworks and landscape planting associated with the raising of the carriageway of Great North Road and St Lukes Road.

–       Pruning of three pohutukawa trees along the road frontage of 820 Great North Road.

The extent of the works is shown in the drawings titled:

–       Temporary use of open space land designated as D06-08 at 820 Great North Road for the purpose of carrying out battering (re-contouring) work parallel to the boundary with SH16.

–       Works within 820 Great North Road will include the removal of vegetation, earthworks (including battering) and landscape planting.

The extent of the works is shown in the drawings titled:

This letter provides formal landowner approval on behalf of Auckland Council, subject to the applicant’s formal acceptance of the following conditions:

3.     Pruning of trees within 820 Great North Road shall occur in accordance with the Auckland Transport Code of Practice dated 16 June 2013 and detailed on Aurecon’s spreadsheet for “Over Dimension Envelope Pruning Requirements at existing kerb at 5.0m height from design level”.

4.     Prior to works commencing beneath the dripline of the pohutukawa trees at 820 Great North Road Auckland Transport and/ or their contractor shall submit to Auckland Council Local and Sports Parks Central for approval, a construction methodology for all works within the dripline of the trees. Specifically detail shall be provided regarding the build up of the carriageway and footpath.

5.     The approved construction methodology required by condition 4 shall be implemented on site.

6.     All tree work shall be undertaken following agreement on methodology and be carried out to the satisfaction of the Arboriculture and Landscape Advisor – Central.

7.     All tree work shall be carried out by Auckland Council approved contractors.

8.     All tree pruning and works within the dripline of vegetation within 820 Great North Road shall occur as described in the “Arboricultural Implication Report: Proposed Great North Road (East) carriageway narrowing at the St Lukes Road interchange”, dated October 2013, prepared by The Specimen Tree Company.

9.     Auckland Council’s Parks Arborist Simon Cook shall approve the use of and brand of any ‘High Fungal Mulch’ or other treatment to be placed beneath the trees within 820 Great North Road.

11.  Removal of the asphalt on the footpath adjacent to 820 Great North Road is to be carried out using a small digger with a straight blade bucket – under arboricultural supervision. Root heave is visible within the existing footpath (not in the carriageway) indicating the presence of Pohutukawa roots within this area. Therefore the construction methodology must include a layer that will continue (even if only in the short term – e.g. 5yrs) to allow air and water passage. The detail is to be approved by the Arboricultural and Landscape Advisor but might, for example, involve a layer of rocks overlaid with geotextile and then a compacted layer overlaid with seal or root cells which are used in a number of roads and footpaths in central Auckland.

12.  Where the ‘W’ Barrier is to be installed between the carpark and SH16, the existing carparks and kerbing shall be cut back to allow a 1m planted overhang between the edge of seal and the barrier, ensuring that the resultant carparks meet the requirements of the Unitary Plan.  Extend Coprosma repens ‘Poor Knights’ to this area.   W Barriers to be on steel supports to minimise their structure.  New kerbing to match existing.  A 1m overhang between the edge of seal and the barrier can be provided. Based on geotechnical investigation taken it is likely that this 1m strip can be planted, however this will be confirmed on site during the works.  Kerb relocation will be carried out in accordance with the District or Unitary Plan rule relevant at the time of construction.

13.  The style and location of the guard rail along the southern edge of 820 Great North Road adjacent to the battered edge with the motorway shall be designed in association with Local and Sports Parks Central.

14.  Replace all swathes of Muehlenbeckia complexa on Council land with Anamenthale lessionaina.

16.  Replace all proposed flax/anamenthale lining footpath/shared paths replaced by a more upright species, such as Apodasmia or Libertia to prevent trip hazards caused by drooping foliage.

17.  Planting maintenance/defects period to be 1 year.

18.  Any landscape hardworks (walls, paving etc) is to match existing.

Cycle and pedestrian connections through this precinct are a priority for the Waitemata Local Boards.  Achieving a well-planned and connected cycleway is considered part of the mitigation for the loss of open space caused as a result of the project.  The Waitemata Local Board and Albert-Eden Local Board request Auckland Transport confirm consultation for the Great North Road Corridor Management Plan Project will be undertaken with the Boards as part of the CMP project and that the following matters will be considered through this process:

20. The work areas shall be adequately fenced to prevent public access within 5m of the work areas.

21.  All adjacent Residents which share a common boundary with the Reserve shall be notified five working days prior to commencement of works on site.

23.  Works shall not commence before 7:00am nor continue past dusk or 6pm, whichever is earlier. Works within the reserve shall not be undertaken during weekends or public holidays.

24.  The works area and machinery located within the Reserve shall be left secure overnight.

26.  This written approval expires one year from the date of the issue of this letter.

If there are, any amendments to this proposal a new assessment will need to be undertaken by Parks, Sport and Recreation prior to any works commencing.