New bus services and routes commenced on 14 August as a result of the Central Flagship Project to improve the efficiency of the bus network. Unfortunately the termination of the 015/017 services and partial replacement by the new 020 bus route (via Wellington Street) has had a significant impact on the Freeman’s Bay community. Many residents have contacted me directly about the issue.  On 31 August I attended a public meeting organised by MP Jacinda Ardern at Rupas café for residents to voice their concerns to Auckland Transport.

The Transport Portfolio met with AT engineers to discuss the road safety improvements proposed as a result of travel planning at Parnell District School. The Board as a whole met with NZTA Regional Director Stephen Town to discuss the NZTA projects that are relevant to our local board area. I also attended the Transport Committee meeting on 15 August and the launch of the new LINK services at Jellicoe Street on 19 August.

Submissions on our draft Local Board Plan closed on 8 August with over 130 submissions received in total.  Hearings were held over 2 days 25 and 26 August. As noted in the report by officers on the submissions the vast majority of submissions were supportive of the Waitemata Local Board plan in entirety or for the most part. This is a positive sign for the Board and is likely a product of significant community engagement in the early phase of the plan development.

I also attended the joint local Board hearings on Friday 19 August relating to all draft local board plans. I attended the site visit to Argyle Street with officers to determine the potential community uses for the former Masonic Lodge that was purchased by the former Auckland City Council Officers briefed me and Tricia Reade (community portfolio team) on the community leasing portfolio so we can better understand the Council properties available to the community. During August the Communities portfolio also met with the Vicar Susan Adams and Project Manager Dheepa Nedungat to discuss the proposed community facility development at St Columba Church. And with Parnell Trust to better understand their services, facilities and funding arrangements.

The Committee held its second meeting on 2 August to agree the annual funds available for community grants, the objectives of the funds and criteria for applications. The minutes of the meeting are available here http://www.aucklandcouncil.govt.nz/SiteCollectionDocuments/aboutcouncil/localboards/otarapapatoetoelocalboard/meetings/waitematagrantscommin20110802.pdf

Attended the Strategy and Direction Setting briefing/workshop on the Long Term plan organised for all local Boards by the Council plan team on 3 August. 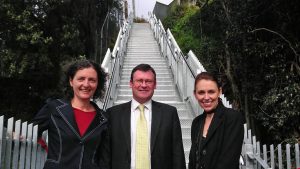 Events I attended the following events during August: