The Transport Portfolio monthly transport catch up with Auckland Transport was held on 25 October with me and Christopher Dempsey.  We covered a number of issues including:

Full details of these issues and other matters discussed are outlined in the Auckland Transport monthly report attached to the November agenda.

The Local Board Agreement transport proposals for funding from the Local Transport Fund that I reported on last month have now been referred to the Review Group for an initial assessment.

Invitations went out on 31 October to business associations and members for the “Good for Business” Seminar to be held on Wednesday 28 November. This will be an opportunity to hear from international expert Rodney Tolley about the economic benefits to business of streetscape investment.

The last of our Greenways workshops was held in October to confirm and prioritise the draft greenways routes that we would like presented at our December meeting for endorsing by the Board so that we can start consultation. This is an exciting project that has the potential to transform transport options in our area and will maximise the walking and cycling investment currently underway by Auckland Transport, NZTA and Waterfront Auckland.

I have received a number of complaints this month about the standard to which pavements are being re-instated following the Chorus UFB works. In a number of places the high grade footpaths that were renewed in the western bays area only a couple of years ago are being left in a “patchwork” condition. Auckland Transport is following up these issues with Chorus and working to ensure the Code of Practice is followed.

I attended the NZ Traffic Institute’s annual conference in Takapuna on behalf of the Board.  I learnt a huge amount at the conference about road safety and the “safe system” principles.  I would recommend all members become familiar with the safe system approach to road safety and the responsibility we need to take as politicians for road design and working towards zero fatalities. My conference report is attached.

Tricia Reade attended the Central Local Boards Joint Funding Committee workshop on my behalf on 19 October. We first considered the officer recommendations together for applications to the Community Group Assistance Fund and the Accommodation Support Fund. Both of these funds are substantially over subscribed with many of our local groups relying on the funding support.  The committee meeting to decide which groups will receive funding is on 9 November. The agenda is available online. 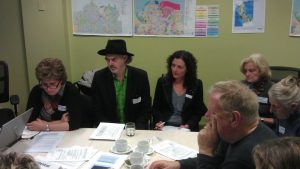 It has been recognised by Auckland Council and the Government that there is a housing crisis in Auckland – a crisis of supply, affordability, quality and choice. I attended the briefing on the Housing Strategic Action Plan (HSAP) that commits Council to working with others to deliver a multi-sector plan. Stage one of the HSAP, which is programmed to be completed by December this year focuses on investigating the whole range of possible housing development vehicles, policy and regulatory tools, available to Council that would increase the supply of affordable housing in Auckland. I would like to see the Auckland Council take a pro-active role in providing and encouraging affordable housing  (which needs to be understood on a continuum from social housing through to assisted home ownership and covering affordable rent) and making full use of the tools available such as inclusionary zoning.

A range of meetings and presentations were attended during October relevant to the Community portfolio – these are listed below.

I attended this free conference on Saturday 6 October on behalf of the Board. The conference started with an enthusiastic welcome from the Mayor Len Brown, who is patron of the Keep Auckland Beautiful Trust (KABT).

As I learnt at the conference the KABT is a new Trust that falls under the umbrella of Keep NZ Beautiful. It builds on the work of Keep Waitakere Beautiful that has operated from Eco- Matters Environmental Trust. As a non-profit organisation KNZB operates as a charitable trust to promote litter abatement, waste minimisation as well as town and city beautification across New Zealand.  The purpose of the conference was to the determine what level of interest there is in the Auckland Region for localised beautification projects and what Keep Auckland Beautiful Trust can do to support, foster or initiate these projects.

I asked Iris Donoghue, Chair of the KNZBT about the funding sources of the Trust as I am concerned about the support provided by tobacco companies. Iris confirmed that a tobacco company is a member of the Trust and provides funding (which is voted on each year) but not the Auckland Trust. I think the KNZBT has done a lot of good work and it is great we now have an Auckland Trust but I would like to ensure that any support we provide does not in any way benefit the tobacco industry (for example by providing public place ashtrays that normalise smoking in public areas and put the cost on to Council).

I attended the BID workshop with Nick Pinchin from the Grey Lynn Business Association to get a better understanding of the process and funding available for setting up a BID. The workshop covered the value of BIDs in an economic development context, identifying a business area’s needs and the key priorities for a BID, how to engage the business community, surveying businesses, developing a strategic plan, lessons from recent BID establishments, the balloting process, resourcing the establishment process, funding and budgeting to get to a successful outcome. The GLBA is going to consider the process more carefully but the initial reaction is that as there is no longer funding available to support a BID establishment process it is going to be extremely difficult for an association run by volunteers to get a BID off the ground.

I attended the following events and functions during October: