Transport At the beginning of February I worked to finalise the list of initiatives and projects detailed in our draft Local Board Agreement (included in the draft Long-Term Plan 2012-2022) that we will be advocating to Auckland Transport to deliver during 12/13 (the draft was agreed to at our business meeting on 14 February). The Transport Portfolio took the view that a prescriptive transport list is required in the terms of the agreement to best ensure that Auckland Transport will deliver on the community outcomes outlined in our Local board Plan.

I have included the full list taken from the draft agreement in my report below for ease of reference as it is very difficult to locate this part of the document in the draft LTP on the Auckland Council website. (From page Vol 4, chapter 26 page 365) Advocacy

Some of the initiatives and priorities contained within Waitemata’s Local Board Plan fall outside the decision-making responsibilities or budgets of local boards. These will require decisions from the governing body, council-controlled organisations (CCOs) or other agencies. The Waitemata Local Board will advocate for the following initiatives:

b. Auckland Transport to continue the delivery of the below projects, already under consideration:

2. Slow traffic on residential streets and at local shopping centres: a. Auckland Transport and the Board to work together on identifying traffic calming measures for the shopping areas in Parnell, Ponsonby, Karangahape Road and Richmond Road to support 40 km/h zones. This would include for example, raised crossings, raised intersections and kerb build-outs to narrow the road.

b. Auckland Transport to trial a 40km/h (or even 30km/h) speed zone for a residential area for example the area west of Ponsonby Road (between Richmond Road and Jervois Road where the speed environment is already below 40km/h).

4. Review and improve traffic management in Auckland Domain Auckland Transport to improve walking and cycling access to and around the Domain, while discouraging commuter parking use of the Domain through: i. Implementation of a parking scheme for the Domain that works to discourage commuter parking (e.g. through pricing) ii. Improving walking and cycling options through the Parnell-City Centre walk/cycleway and Carlton Gore Road (cycle lanes and the pedestrian crossing over Carlton Gore Road at George Street concept).

5. Conduct an audit of intersections that can be improved for pedestrians Auckland Transport to conduct an audit of intersections in substantial foot traffic areas and develop solutions to improve safety and mobility for pedestrians. This includes: all intersections with left–turn slip lanes and no pedestrian facility e.g. Mayoral Drive/Albert Street, Mayoral Drive/Vincent Street; Beach Road to Tangihua Road, and from Tangihua Road to Beach Road other slip lanes with no pedestrian facility e.g. Albert with Wyndham, Victoria and Wellesley streets intersections with long pedestrian crossing delays, eg Curran Street and Jervois Road, St Marys Bay Road, College Hill in Ponsonby.

7. Develop a Master Plan for Richmond Road Auckland Transport to develop a Masterplan for Richmond Road taking a complete street/living arterial approach to meet the community’s desired outcomes (eg slower traffic, pedestrian friendly, improved urban design), taking into account previous research including the 2011 safety audit. The plan will then be delivered in the 2013-2014 financial year.

8. Upgrade Franklin Road Auckland Transport to undertake the planned upgrade of Franklin Road to provide for safe and continuous walking and cycling pathways from Ponsonby Road to Victoria Park including continuous pedestrian facilities (ie, an unbroken footpath on both sides of the road) across all side streets, driveways and intersections (for example by installing raised tables).

10. Support of other (non-transport) draft local board agreement priorities Auckland Transport to support other Waitemata Local Board agreement priorities including: · Support the introduction of three swales in the Local Board area · Support delivery of green walls, roofs and community gardens on Auckland Transport assets e.g. car park buildings · Support development of green links connecting parks and open spaces. Feedback on the draft Local Board Agreement transport initiatives can be provided as part of the LTP consultation until 23 March (refer http://www.aucklandcouncil.govt.nz/EN/AboutCouncil/PlansPoliciesPublications/Long_term_plan/Pages/haveyoursay.aspx) Consultation on the draft Regional Land Transport Programme (RLTP) is being undertaken alongside the Long-term Plan. The RLTP will summarise the transport priorities for Auckland over the next 10 years so the Transport Portfolio is working to ensure that our local board priorities are also included in this document. I attended the cluster workshop on 2 February for Auckland Transport to inform all Local Boards about the RLTP as well as a presentation from the Bylaws review team on the preliminary consultation on a Speed Limits Bylaw and a Traffic Bylaw.

As part of February’s Bike wise month I attended the launch of Auckland Transport’s summer cycling guide in Aotea Square and the Go by Bike Breakfast on 15 February. I attended the Walking and Cycling Conference in Hastings (22-24 February) with Christopher Dempsey (a full report will be attached to our April agenda). In February I also attended the Governing Body’s Transport committee.

Community Auckland Council’s consultation on the draft Long Term plan 2012-2022 commenced at the end of February. For the Board this involves hosting 3 community meetings starting in Parnell on 28 February. I presented on behalf of the Board with an overview of the initiatives in our draft Local Board Agreement which forms part of the draft LTP. Consultation is open until 23 March.

At the Economic Forum on Monday 13 February we moved closer to Auckland becoming Fairtrade. I spoke to the Forum in support of the Board’s resolution passed in May 2011 (WTM/2011/85)That the Waitemata Local Board recommends to the Governing Body of Auckland Council that Auckland becomes a Fair Trade City.

The Economic Forum voted to recommend to the Regional Development and Operations Committee and the Tenders and Procurement Subcommittee that Auckland Council support Auckland being a Fairtrade region.(Resolution number ED/2012/7) On 28 February I presented with Tricia Reade the Board’s community initiatives and projects to the Social and Community Development Forum at the invitation of the Chair, Cr Casey. During February I also contributed to the Board’s submission on Auckland Council’s draft Waste Minimisation and Management Plan (attached to the March agenda). 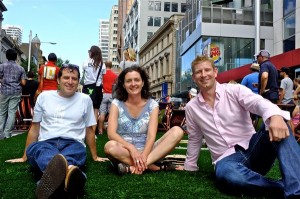