The monthly Transport catch up was held with the Transport portfolio (attended by myself, Members Dempsey and Moyle) and relevant officers from Auckland Transport on 24 May. The issues discussed are reported back monthly by AT on our public agenda.  Specific issues include:

Follow up: a parking survey for the Grey Lynn surrey Cres shops in conjunction with the Grey Lynn Business Association briefing from NZTA to update the Board on NZTA/AT projects in the Waitemata area

Auckland Transport has responded positively and promptly to requests for additional bike parking in Grey Lynn and West Lynn shops at four new locations. The owner of Kokako café is particularly happy that AT has installed parking on the corner of Great North Road and Williamson Ave and wrote: “Just wanted to say thank you for organising the bike racks in front of Kokako – they are awesome and our customers are loving them!” 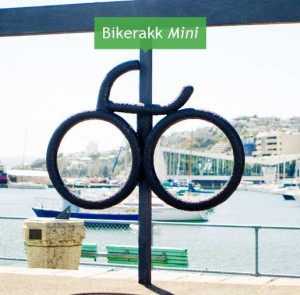 During May, I joined AT for meetings with the Ponsonby Business Association to discuss a trial bike parking corral on Ponsonby Road and the K’rd Business Association to discuss locations for trial mini “bikerakks” (bike stands attached to existing poles) on K’rd. Auckland Transport is supporting both of these initiatives and has purchased 10 bikerakks minis for use on K’rd.

Member Dempsey and I met on site with our Elected Member Liaison Manager to discuss the lack of bike parking near Britomart station. This was prompted by the removal of bikes (including mine!) that were considered safety hazards by security at the station.

K’rd over bridge On behalf of the K’rd Business Association, I have been following up on the incorrect installation of the panels on the K’rd overbridge. Auckland Transport has advised that the architects preferred the current height in order to shield the unsightly landing/bridge area from the view while the business association did not support this design.

Next Steps: Auckland Transport is arranging a meeting with Barbara Holloway from the KBA to discuss two potential options.

A Local Board cluster briefing was held during May on a proposed $10m Local Board transport capex fund. At the briefing, we were informed that this fund would be available for Local Board projects NOT in the current transport programme.   I followed up with a query to Stephen Rainbow asking AT to confirm what  Local Board transport projects and priorities (identified in either Local Board plans or agreements)  are included in AT’s work programme. I am yet to receive a response. Local Boards have been asked to respond to a discussion document however I do not consider it possible to provide feedback on how the proposed fund is allocated until AT’s understanding of the current framework and prioritisation process has been clearly articulated.

In my February monthly board report I reported back on the Auckland Walking Seminar “stepping into the future” hosted by Auckland Transport with guest speaker Dr Rodney Tolley, author of the Good for Business report. As a follow up to this seminar I have met with Auckland Transport to look at arranging a jointly hosted workshop for business associations interested in understanding the economic benefits of making streets more walking and cycling friendly. Next steps: AT to invite Rodney Tolly to present at a workshop

During May, I attended two Board events to seek community feedback. After the Mayor officially opened the Campbell Free Kindergarten on 5 May, an open day was held to hear ideas about possible uses for the building. We are yet to receive an official report on the submissions but there was good turn out and lots of positive suggestions about community uses. Weona Reserve Walkway open evening was held at Seddon Fields football club on 17 May. Many of the affected residents took the opportunity to discuss the plans with Board members and officers.  A report on the feedback will be on the agenda for the Board’s meeting on 19 June.

The community portfolio worked with officers to finalised high-level feedback on the draft Community Assistance Framework (comprising on the draft Community Funding Policy, draft Community Occupancy Policy and draft Facility partnership Policy).  This feedback is attached to the agenda. Specific concerns about the changes to the Accommodation Support Fund, Arts Alive Funding and Events funding as part of the Funding Policy were made by way of resolution at the Board’s May meeting (refer item 40 of the minutes).

I was honoured to have the opportunity to present Western Springs College with their Enviroschools Silver sign at a student-led junior assembly on 15 May. (A copy of my speech is attached as Attachment A) After the presentation, the Waste Wise students led a tour of the waste minimisation projects around the school such as the separated waste bins and a composter. 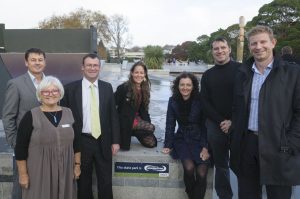 I assisted Member Tricia Reade with planning for the launch of smokefree playgrounds with an event on World Smokefree Day at Victoria Park Skate Park. We met with the Principal and Deputy Principal of Ponsonby Intermediate to discuss the launch and how it could best involve students from the School. We also met with officers and the Cancer Society to plan the event. The official unveiling of the Board’s new Smokefree signage took place on 31 May with a display by Ponsonby Intermediate’s cheer leading squad and  skateboard and scooter competitions.

In our Local Board Plan, we have made a commitment to become an accessible board and area. When the opportunity came to have new business cards printed, on the advice of Auckland Council’s disability advisor, I requested a font size of 14 for details on the card. It took 2 months but with the assistance of Emma Monk, communications advisor, I am very proud to now have, what I believe to be, Auckland Council’s first large font size business cards (see Attachment B). I recommend the design as simple and effective and that it should become the default for all business cards within the organisation.

On 4 May, Mayor Len Brown launched Auckland’s status as a Fair Trade City joining a network of 1000 towns and cities around the world. The Waitemata Local Board kicked off the process through Auckland Council to meet one of the key requirements of being certified a Fair Trade City. It took exactly a year from our own resolution to be the first Fair Trade Local Board in May 2011 for the decision to go to through the Council’s Economic Forum, the Tenders and Procurement sub-committee and finally to the Regional and Operations Development Committee in March when the Mayor and Council voted unanimously in support. The Mayor received Auckland’s Fair Trade certificate from Michael Toliman, the coffee farmer from Papua New Guinea in New Zealand for fairtrade fortnight. The Board held its Fair Trade coffee break at the Board office on 17 May raising $100 for Oxfam. Chris Morrison and Julia Collins from All Good Bananas were our special guests who generously provide a box of Fairtrade Bananas.

Grey Lynn Business Association I attended the GLBA business meeting on 1 May. I am following up a number of issues for the GLBA board including parking issues and streetscape improvements at the Surrey Cres shops.

I am taking a close interest in the development of the Council’s waste plan. I attended the deliberations meeting of the Hearings Panel on the draft plan on 29 May. The recommendations to be made to the governing body on 8 June are consistent with the Board’s support for waste to be considered a valuable resource with appropriate incentives to encourage recycling and waste minimisation. The panel gave particularly strong support for the development of a resource recovery network to replace the inorganic collection and noted the initiative of the Waitemata,  Albert – Eden and Puketapapa Local Boards to develop a pilot resource recovery centre.

Following consultation and deliberations on the Waitemata Local Board Agreement the final amendments were agreed at our May public meeting. I took a particular interest in the Advocacy to Auckland Transport section of the Agreement and recommended amendments that ensure all the proposed projects for 2012/13 are consistent with Auckland Transport’s work programme and the Local Board priorities. I supported the Chair in preparing for our “Discussion” with the governing body and spoke to the transport issues at the meeting. Although Section  21(1) of the Local Government (Auckland Council) Act 2010 requires that for each financial year, the Auckland Council must have a local board agreement (as agreed between the governing body and the local board) for each local board area,  it is disappointing that at no point in the process has a “negotiation” occurred between the local board and the governing body.

I attended the LGNZ meeting on 11 May travelling to Manukau on the new train service. At the meeting, Mike Cohen reported back on behalf of Local Boards. He highlighted his views oon the restructuring issues and gave the example of the parks budget, which does not provide the Boards with any incentive to find efficiencies and cost savings. However if Boards seek improvements this has to be found from the Board’s budget. I was also interested in the update from TRAFINZ (the New Zealand Local Authority Traffic Institute) that represents local authority views on road safety and traffic management in New Zealand. Like the Board, TRAFINZ supports speed violations being delegated from the Police to Local Authorities.

I attended the following events and functions during May: