The Transport portfolio meets monthly with representatives from Auckland Transport. The June meeting was attended by myself and Jesse Chalmers (Transport Portfolio – West) and Christopher Dempsey (Transport Portfolio – East).  We received updates on the prioritisation of the minor safety programme and the proposed Opex projects for investigation in 2011/12. We were also updated on the K’rd bus shelter project by Opus. Updates to matters on our Issues Register are reported on each month by Auckland Transport at our Board meeting (the full reports are available at www.aucklandcouncil.govt.nz/waitemataunder agendas)

Auckland Transport also briefed the Board (Transport Portfolio) on the minor works planned as part of the Mt Eden Rd corridors for the Rugby World Cup and on the outcome of the Central Flagship project consultation that will see new bus routes and services commence from 14 August (attended by myself and Chair, Shale Chambers together with members of the Albert- Eden Local Board) Relevant to the transport portfolio, I also attended during June:

I met local residents regarding transport issues on Ponsonby Road (together with Tricia Reade), Maxwell Street and Bayard Street (together with Jesse Chalmers)

I assisted the Chair in finalising the draft Waitemata Local Board Plan following the resolution from the Board at our June meeting that confirmed agreement on the text of the plan for consultation using the Special Consultation Procedure (SCP). I also participated in discussions to determine our strategy for the SCP I attended the second Regional Communities Summit organised by Auckland Communities Development Alliance (ACDA) on 1 July with Board member Tricia Reade. The Mayor and Deputy Mayor were both guest speakers.

I organised a Save the Grey Lynn Post office on 8 June on behalf of Grey Lynn 2030 and the Grey Lynn Business Association. More than 50 residents attended to raise their concerns regarding the downgrading of services in Grey Lynn. A follow up meeting was held with NZ Post on 28 June.

The first Auckland Libraries and Information Quarterly Report (January – April 2011) was received at the Board’s June meeting (see June agenda). It was noted at the meeting that the library service is working extremely well and that no issues of concern have been raised by residents with the Board.

I was acting Chair for the week beginning 27 June. During this week I worked with Council officers to finalise the communications with regards to our draft Local Board Plan and details of our Board’s achievements since 1 November 2010 which will be included in the Auckland Council’s annual report.

Following our May resolution to become a Fairtrade Local Board we are now serving Fairtrade team and coffee in our meetings. I attended Good magazine’s Fairtrade Cocktail Soiree in honour of Harriet Lamb, Executive Director of the UK’s Fairtrade Foundation who was visiting NZ  and the panel discussion “How to change the world one banana at a time” with Harriet Lamb as a guest speaker. 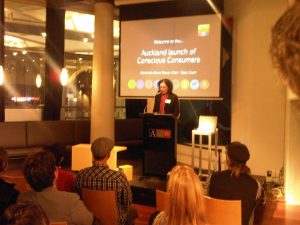 On behalf of Auckland Council I spoke at the launch of Conscious Consumer a project supported by the Council that awards badges to participating cafes that have demonstrated a commitment to socially and environmentally conscious business practices including Fairtrade and waste minimisation.

I also attended the following events during June: