In early December I attended the Auckland Walking Seminar – stepping into the future hosted by Auckland Transport. Guest speaker Rodney Tolley outlined why a good walking environment is a pre-condition for an economically healthy city.  (resolution WTM 2011/321 approved the registration costs be paid from the professional development budget).  A full report of this seminar is marked as Attachment A.

During December I also attended:

In December new textured surfaces were installed on Ponsonby Road by Auckland Transport at the request of the Transport portfolio to encourage motorists to drive to the 40km speed limit.

On 17 January a briefing was held with board members to outline the feedback from the St Marys Bay resident parking scheme consultation.

The Transport portfolio monthly briefings with Auckland Transport representatives re-commenced on 26 January.   Full details of current proposals and issues are outlined in Auckland Transport’s monthly report attached to the Board agenda (available at www.aucklandcouncil.govt.nz/waitemata under agendas).

The community portfolio is working to identify what Council property is available to be used for community facilities and to ensure that potential community purposes take precedence over commercial arrangements. To this end it was confirmed at our December Board meeting that we are looking to the community lease team to consider options for the Campbell Free Kindergarten (newly restored by NZTA) by holding an open day to gather feedback from the community on possible uses.

At our December Board meeting we also took further steps towards becoming an accessible local board. With the support of Member Thomas we have requested Democracy Services to report back on options to ensure all online content is fully accessible electronically.

I also attended the Getting Our Rubbish Sorted – Seminar organised by Civic Trust Auckland on 17 January and have taken a close interest in submissions on the Auckland Council’s draft Waste Minimisation and Management Plan which were due by 31 January.

The Committee met to consider applications to the second round of community grants funding 2011/12. A total of $25, 345 was recommended in grants to the Waitemata Local Board ordinary meeting on 13 December 2011. The minutes of the meeting are available here.

Attended the GLBA networking drinks and a strategy session with committee members in December and the first meeting of the year for the GLBA committee on 24 January.

I attended the final meeting of the year as the alternative on the Board (thank you NBA for the bottle of wine!).

Represented the Board, together with member Dempsey, at the 3rd Auckland Northern Battalion Group Charter Parade on 3 December 2011 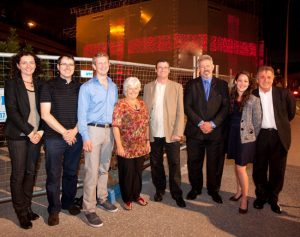 I attended the following events and functions during December:

I also enjoyed everything the Auckland Waterfront has to offer on Auckland Anniversary day including the Regatta, Buskers Festival and Seafood Festival.