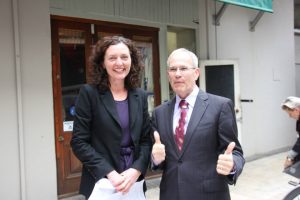 2013 marks 120 years since NZ women were granted the vote. I was really fortunate to be invited by NCWNZ – Auckland branch to speak on the role of the bicycle in the suffrage movement at the annual celebration of suffrage day at Khartoum Place. Here is my short speech:

I love using a bike for transport because it is freedom

So I can imagine the incredible feeling of freedom experienced by women when the safety bicycle was invented in the 1880’s. Cycling was an activity that women could do equally with men, especially wearing bicycle bloomers.

NZ women were huge enthusiasts for riding. Kate Sheppard was one of the pioneering cyclists and a member of the Atalanta cycling club in Christchurch. I can just imagine Kate and the suffergists on their bicycles collecting many of the 32,000 signatures that secured women the vote. I thank them for their activism and determination and acknowledge the role of the bicycle in the emancipation of women.

I also give thanks to the frockers who have come along today on their bikes- including Kate Sheppard’s great, great niece, Barb Cuthbert who is also an activist working to get more Aucklanders cycling every day.

Just by riding a bicycle as a woman you are demanding freedom of the road and investment in cycling infrastructure.  Fortunately the Mayor is committed to making cycling a priority in his second term so we can reclaim the roads for women and children and ride with the same confidence as the suffergists in the 19th Century.

Thanks  to Julie Fairey and Margaret Wilson from the NCWNZ for the opportunity to speak about bicycles on this significant day.