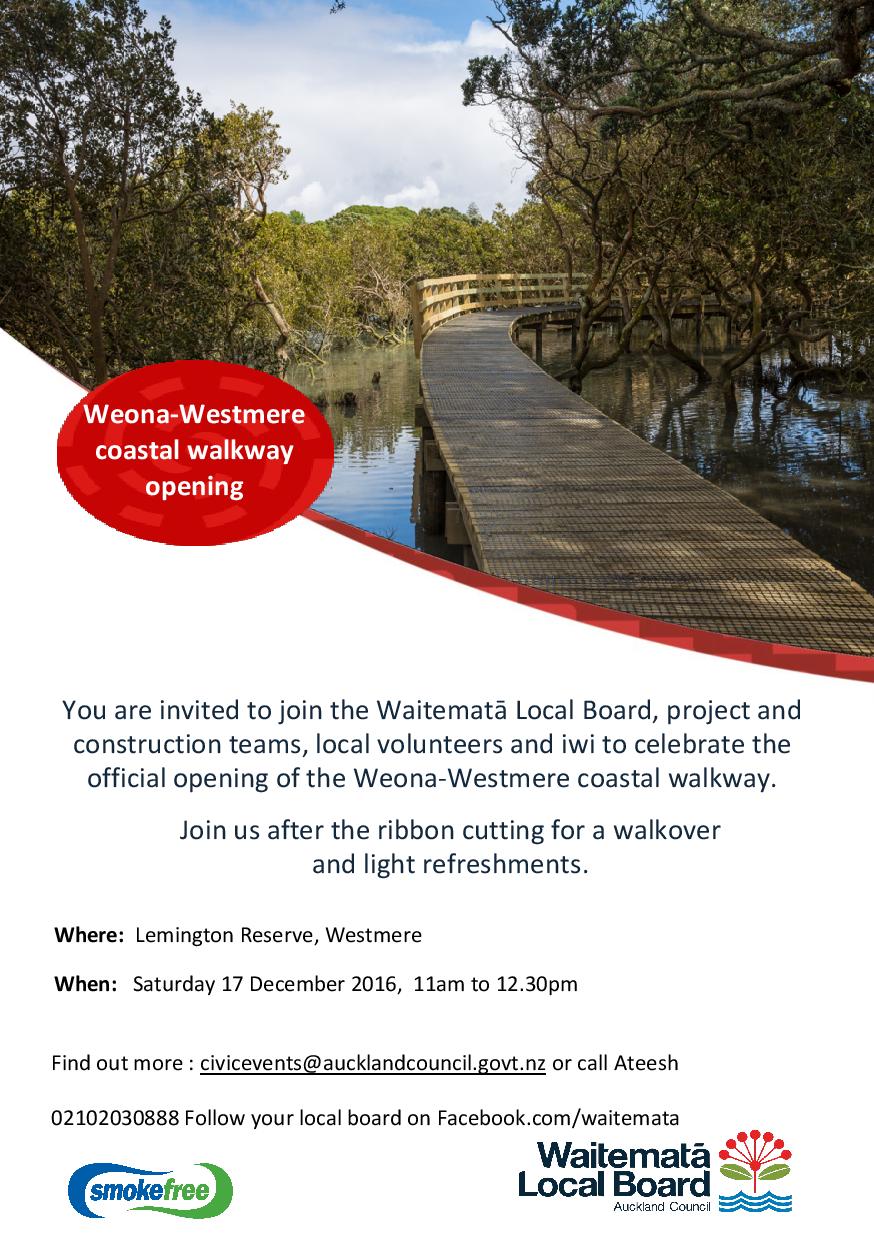 The origins of the walkway begin with the subdivision of Westmere in the 1920’s. In 1926 the subdivision promotional material showed a strip of public reserve along the eastern banks of Motions Creek from Meola Road to the mouth of the creek.

“thus ensuring equal access to the whole of the sand beaches to every section holder and preserving to the public the fine old Christmas trees, the golden kowhais and the other native flora which so lavishly adorns the waterfront.”

Originally the reserve would have been a fringe of coastal open space with the neighbours able to wander around the coast but over time it became over grown, encroached on and lost as public land. The estuary across to Meola Reef was also long neglected by Council and used as a dump. Over the last couple of decades there have been various attempts to open up a coastal walkway connecting accessible pockets of the reserve from Meola Road around to Garnet Road.

I first heard about the reserve land and the “Weona-Lemington Coastal Forest” at one of the last Western Bays Community Board meetings in 2010 when two Westmere locals, Sandra Anderson and Jeanette Budget gave a presentation asking Council support to establish a coastal track and put in place a management plan to reinstate the ecological values of the coastal fringe.

With community support the Weona-Westmere walkway became a Waitemata Local Board funded project in 2011 led by the City Vision members. Since then Shale Chambers has been the Board’s champion keeping the project on track through the very heated public meetings, the resource consent appeals and extensive construction challenges. The project has also been supported by volunteers who have planted a lot of the regenerating bush over the last couple of years.

Finally on Saturday 17th December 2016 the Westmere- Weona walkway was officially opened.  It was a proud moment for all involved to see the coastal fringe once again accessible to the public.  I think locals and visitors are going to be blown away to discover this 1.4km coastal path in native bush and on boardwalks with views of the harbour.

The walkway can be accessed from Lemington Reserve at the southern end (path entrances from Meola Road by the Scout Hall,  at 42 Lemington Road or between 44 and 46 Westmere Cres).

There are also entrances off Weona Place and Westmere Park Ave (down a path with steps between numbers 20 and 22). At low tide it is possible to walk from or to Westmere Beach accessible at the end of Westmere Park Ave or Garnet Rd.

All the entrances to the coastal walk are within easy walking distance from the Westmere shops and bus stops (for the Outer Link) on Garnet Road.

Map and description of the walk

Opening up our coast- weona walkway hearing gets underway. August 2013