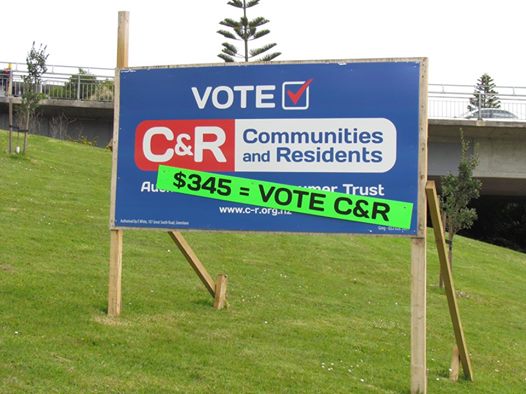 In 2009 I naively stood as an independent in the Auckland Energy Consumer Trust election. I thought the election would be about electing the best possible candidates to be Trustees.  I presumed there would be media coverage of the election issues, discussion of candidate policies and a fair chance of success if my skills and experience stacked up against what the other candidates had to offer.

Unfortunately (or fortunately- because if I had known I would never have bothered) I  had absolutely no idea that there was no chance that I would be elected because everything was stacked against me. I wrote about my experience here.

The incumbent C&R trustees had a very simple strategy:

Then sit back and rely on no media coverage of the election and low voter turnout (less than 17% in 2009) to return them once again to a role that pays between $63,000 and $90,000 in fees. So of course they have taken exactly the same strategy for the 2012 election.

However things aren’t quite working out as planned – the dodgy practices of the AECT election are finally being exposed. Matt McCarten summed it up today here in the Herald on Sunday.

I’m supporting the YOUR POWER TEAM candidates. They have a range of well thought through policies that includes paying the dividend. They will bring long overdue fresh thinking to the role of trustees.

I want to see change at the AECT. I don’t think it is healthy for democracy for the incumbents to go unchallenged any longer.

In the end it was far too easy for the status quo to prevail. Citizens & Ratepayers simply targeted 25,000 plus supporters with a personal letter asking for a vote for all 5 candidates on their ticket. The rank and file fell into line and complied to ensure all five Trustees are now from one political party. The lack of media interest in the election and the incredibly low turnout (less that 17%) meant that it was an impossible task for an independent, or even the other tickets, to get anywhere close.  The AECT media release announcing the election result can be read here.

The AECT website optimistically states that “Your five trustees all come from different backgrounds and each one brings a different perspective to the decisions the Trust makes.” Unfortunately the election results means that only a small number of the Trust’s 300,000 beneficiaries, who are spread across the diverse communities of Auckland, Manukau and Papakura, can claim to be represented by the elected Trustees.

It is hugely disappointing election process and outcome that leaves the unsustainable direction of the Vector unchallenged for another three years. It also allows Vector to continue on a reckless “business as usual” path without adequately responding to the current environmental challenges or tackling an unhealthy corporate culture which is leading the company to inevitable crisis.

It will be interesting to see what the media and electricity consumers make in future of power cuts, under investment in energy infrastructure, rising energy bills, excessive Trustee fees, unsustainable dividend payments, a lack of community engagement by the Trust or any of the range of issues facing Vector and the AECT.

The AECT election has exposed how voter apathy, a paucity of information and well placed resources can distort the democratic process.  There are many lessons to be learnt as we fast approach the first super city elections if we want fresh thinking, a sustainable future and inspiring community leadership to be part of Auckland’s governance.

Only 21% of eligible voters cast their votes in the last election for the trustees of the Auckland Energy Consumer Trust in 2006.  This low turnout is surprising because the asset of the Trust is worth approximately $1.5 billion – a 75.1% holding in Vector Ltd. The Trust received a $98 million dividend from its shareholding in Vector.  The low turnout is because power bill holders are unaware of the fact they are beneficiaries of the Trust and the important role that the trustees play in managing such a sizeable asset on behalf of electricity consumers.

Voting papers will be arriving in mail boxes in the Trust district from Friday 16 October and independent candidate, Ms Coom is taking steps to ensure that voters know about the election by visiting all of the super city–sized voting district over the next two weeks.

“It’s always harder for an independent to get elected but I think it is worthwhile getting out there so that voters know about their Trust, their ownership of a valuable and essential power asset as well as their option to vote for a credible, community focused, non-political candidate as one of the five Trustees” said Ms Coom, a corporate lawyer, most recently at Vector Ltd.   “Quite frankly, I have no idea why the political parties are so involved in these kinds of elections – especially for a non-political issue such as electricity supply.  I would have thought the main criteria for elect-ability was competence to address relevant issues rather than association with voting blocs” she said.

Trust beneficiaries have recently been paid a dividend of $320 by the Trust but the majority are still confused about where it comes from. Common misconceptions are that the money is paid by retail companies, the defunct power board or even one of the party tickets.

“We are entering a unique period in Auckland’s governance history with the implementation of the super city structure.  I think it is vitally important that Auckland’s energy consumers have someone on the board of trustees who is able to think about what is best for their interests without having to follow party allegiances” said Ms Coom.