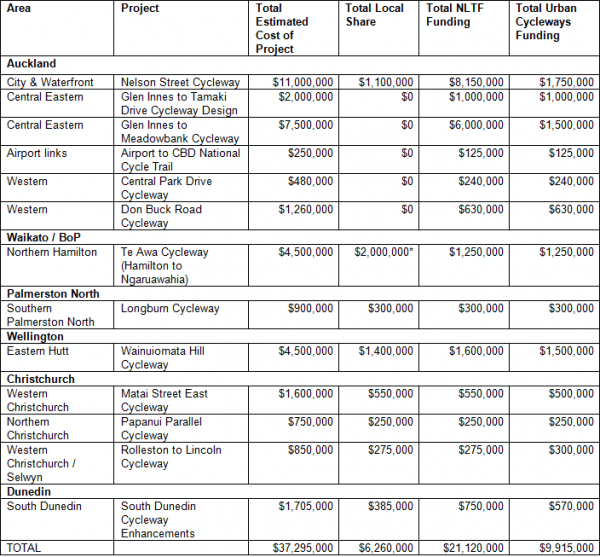 On 30 January on the old Nelson St motorway off-ramp the Minister of Transport announced the first package of projects to receive funding as part of the government’s $100 million Urban Cycleways programme. He also announced the Urban Cycleways Investment Panel that will recommend projects to the Minister.  I’m delighted to have been appointed as one of 5 panel members representing LGNZ.

An exciting new cycleway on the redundant off -ramp (a project included in the City Centre Masterplan) connecting Upper Queen Street with Quay St via Nelson St is one of the projects to receive Urban Cycleways funding from the first tranche of projects.

Transport Minister Simon Bridges today announced the first $37 million worth of cycleway projects to be rolled out across the country as part of the Government’s Urban Cycleways Programme.

First announced in August 2014, the $100 million Programme is designed to pull together a range of funding sources to invest in expanding and improving New Zealand’s cycling network.

“This is the beginning of a programme that will change the face of cycleways in New Zealand using clever funding leveraging.

By pulling together multiple funding sources, the Urban Cycleways Programme will get high-quality projects underway much sooner than may otherwise have been the case.

The Government’s Urban Cycleways Fund will contribute $9.92 million, with

another $21.12 million coming from the National Land Transport Fund, and $6.26 million from local government and other contributions,” Mr Bridges says.

When completed, the Urban Cycleways Programme will have supported the investment of up to $320 million, over four years, to create a safe, user-friendly cycleway network across the country.

“The Urban Cycleways Fund will accelerate the first set of 13 projects, which will get underway in Auckland, Hamilton, Palmerston North, Wellington, Christchurch and Dunedin, and almost all will be completed over the next 6-9 months,” Mr Bridges says.

“The projects I am announcing today have been prioritised because of their value to commuter cyclists, and their additional benefits to recreational riders.

“Further projects to receive funding from the remaining $90 million in the Urban Cycleways Fund will be announced later this year,” Mr Bridges says.

The Panel has been selected to assess the projects and prioritise funding.

The Panel members are:

For further information on the Urban Cycleways Programme the , visit:www.transport.govt.nz/cityrides