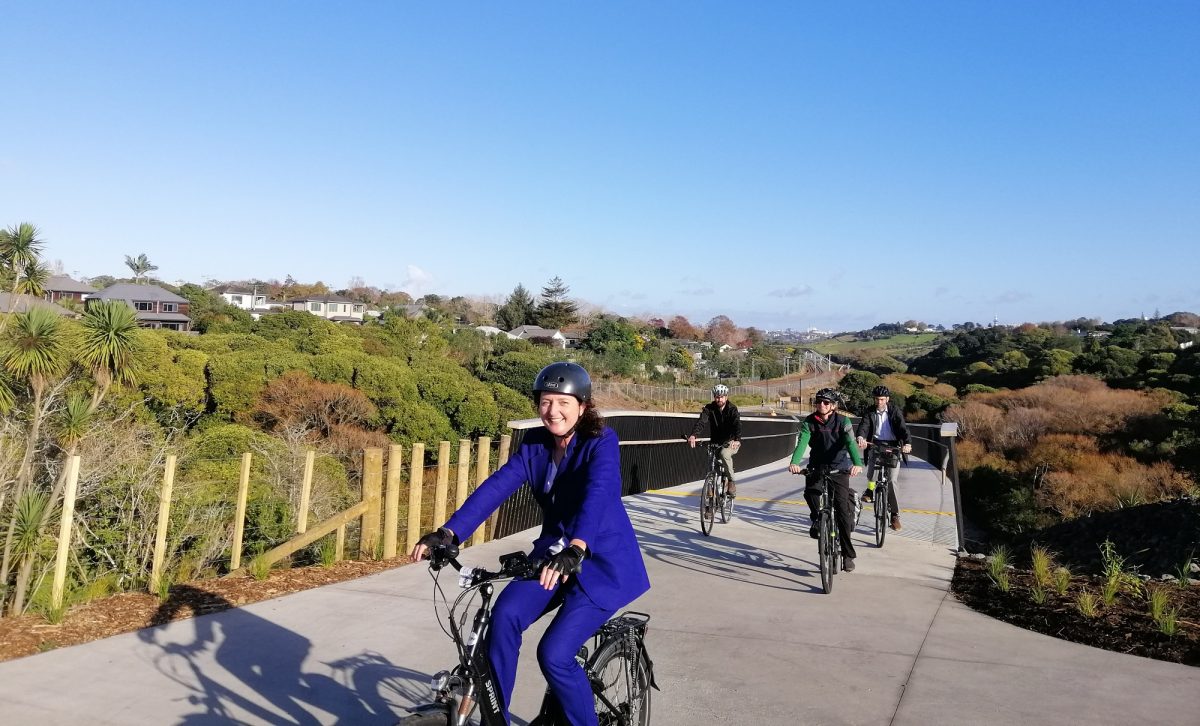 Tāmaki Makaurau has had an aspiration to deliver a safe, connected cycling network since the former Auckland Regional Council signed off plans in the mid-2000s which were then adopted in the Supercity’s first Auckland Plan.

Since then, funding and delivery has been patchy and compared to many cities worldwide, Auckland’s cycling mode share by distance and trips remains low at 0.4 percent and 0.5 percent respectively.  This is often blamed on the weather and the hills, however international studies show that the biggest factor to determine cycling rates is the availability of safe, connected cycling infrastructure.    E-bikes further neutralise the effect of Auckland’s geography making riding a viable transport option across our region.

We also know there is huge demand to be able to cycle safely.  Where cycleways are built riders flock to them, for example, our North Western Cycleway has had a ridership increase of 128 percent between 2015 and 2019 (as measured at Kingsland).  Most Aucklanders own a bike and a recent survey found 56 percent of Aucklanders would cycle (or cycle more often) if it felt safe.

There is often the misconception that the push is to get everyone onto bikes for every trip.  This isn’t desirable or practicable.  To achieve Te Tāruke-ā-Tāwhiri Auckland’s climate plan transport emissions reduction target of 64 percent by 2030 we need to aim for at least 7 percent cycle mode share by distance. This perhaps sounds like a lot, but it might mean using a bike or e-scooter for just a couple of trips a week or for every trip under two kilometres. It is also about making it safe for kids to get to school independently so we can take a big chunk of the approximately 40,0000 school drop-off trips off the road each day.

It is important to acknowledge there will always be a place for cars to be used in Tāmaki Makaurau, and the good news is more people cycling eases congestion for those who need to drive. It frees up space on our roads for essential trips and freight. More people cycling not only improves liveability, public health, and air quality, it is also good for business and the local economy.

Safe, connected infrastructure benefits everyone including the 30 percent of Aucklanders who don’t drive or can’t drive. Cycleways, wider footpaths and safer connections between our various modes of transport makes our city more accessible for everyone. The idea that roads are just for cars because of “congestion” locks us into transport planning that induces more demand for driving making congestion worse. It is also unfair.

So what is happening to deliver the cycling network – now called the Cycling and Micromobility Network – and provide Aucklanders real options to leave the car at home? $306m has already been allocated in the Regional Land Transport Plan unanimously approved by councillors and supported by all local boards last year to deliver cycling infrastructure over the next ten years.  On 5 May the Planning Committee considered the prioritisation of that funding to provide 45 kilometres of safe cycle facilities, as well as concentrated investment in local cycle connections in four key areas  (how the decision was reported in Greater Auckland).

Even though completing the Network is great value for money, it wasn’t a meeting to approve funding and no additional funding was approved.  But what we do know is that more funding will be needed to reach the 7% cycle mode share by distance goal (estimated to be at least $2 billion) as well as a range of significant policy changes at a national level.

By endorsing the direction of Auckland Transport’s Cycling and Micromobility Programme Business Case, a majority of Councillors have acknowledged the type of investment which will be needed in order to achieve our ambitious cycling mode shift target by 2030. Significantly more funding will be needed in coming years from both Council and Government along with some potentially difficult policy changes to shift New Zealanders’ transport behaviours. With bold decision making and smart urban public policy Tāmaki Makaurau has the potential to unleash significant benefits for all Aucklanders.