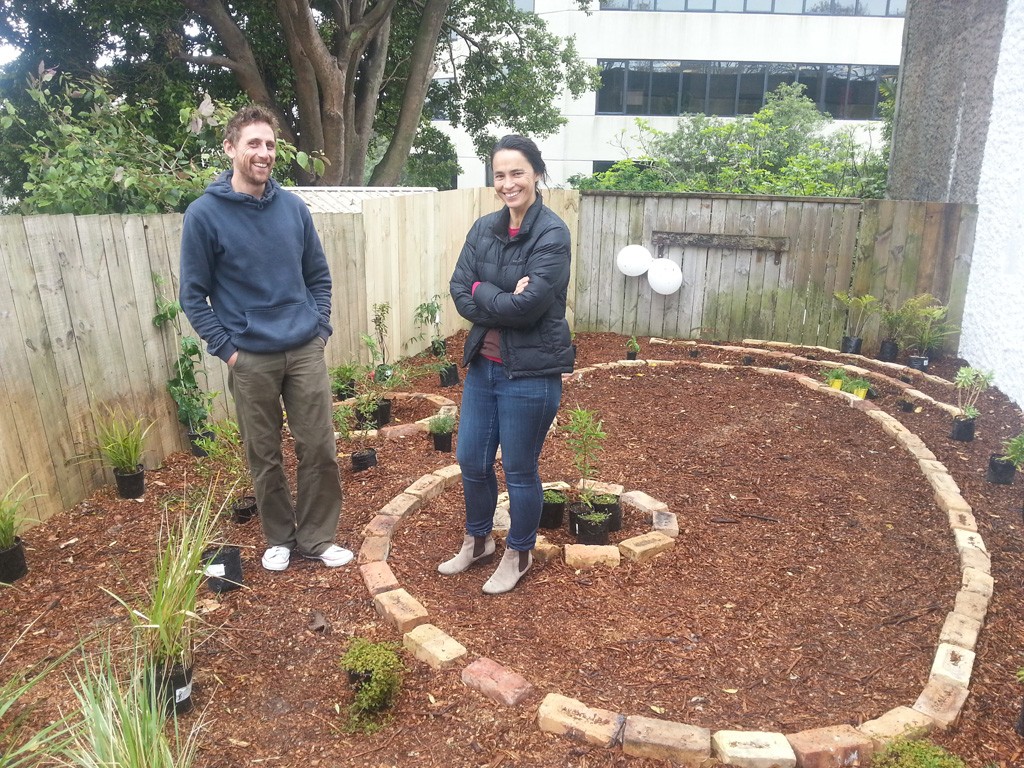 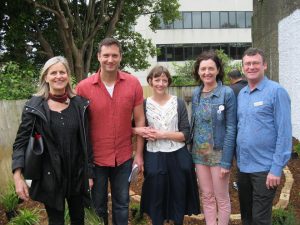 One thing I love about my role on the Waitematā Local Board is being part of making small, local projects happen.  We often hear complaints that local government is slow, unresponsive and  wasteful but in my experience I have found Council staff to be passionate, creative and willing to work hard to deliver on a tight budget.   With political support they find ways to achieve, as Board Chair Shale Chambers likes to say, the Art of the Possible.

So it has been a special pleasure to see Hauora Garden spring up at Studio One, Toi Tū.  In early June I was at Studio One for Bee Jam, part of the POP programme of events (funded by the Waitematā Local Board). Lynda, Parks Team Leader was there for a visit and mentioned that there was still unallocated budget available for community gardening. Knowing that there was a fenced off overgrown section of
Studio One that  had been recently been identified as perfect for a garden I 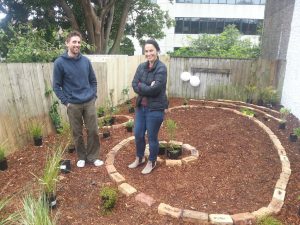 introduced her to Tracey the POP programme coordinator to find out if there was an opportunity for an artist’s POP project.  Fortunately Tracey knew of a  garden project ready to go (it was proposed for POP originally but did not get included in the pilot series), Shale approved the budget and everyone swung into action.

Last Saturday we were able to check out how the site has been transformed into Hauroa Garden. We always need to be careful about not ending up with unallocated budget at the end of the financial year(another criticism of council!). However I think in this case it has been a happy find that has brought about a spontaneous, creative collaboration involving artists, sponsors and volunteers that will provide long term benefits.

Hauora Garden by Auckland-based artists Richard Orjis and A.D. Schierning is an interactive and sensory space that aims to reconnect urban dwellers with the natural world. It will end up including Rongoā Māori, introduced medicinal, edible and endangered native plants.  Many of the materials found on the section have been recycled into the garden design.

Many thanks to Lynda and Tracey for the Art of the Possible and all those involved: House of 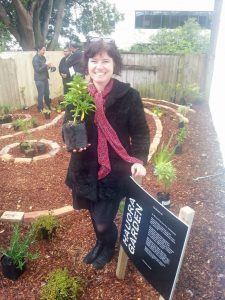 This report covers my Waitematā Local Board activities during June 2014 as Deputy Chair, lead for the Community and Transport portfolios, Chair of the Grants Committee, Deputy Chair of the Central Joint Funding Committee and with positions on the Ponsonby Business Association and Ponsonby Community Centre Committee.

During June I have been part of the Local Board team organising the Pecha Kucha event that will launch our draft Local Board Plan on 16 July at the Town Hall. We have a great line up of fantastic presenters who all in some way shape the beating heart of Tāmaki Makarau. This is the first time the Pecha Kucha format has been used for an engagement event by local government in New Zealand.

We’ve also planned a series of drop in sessions across Waitematā to answer questions on the draft Local Board Plan. Consultation starts on 7 July.

In addition to the Local Board Plan there is an overwhelming number of engagement processes underway or about to start. This is putting a lot of pressure on our local volunteer community groups who are understandably feeling very stretched:

The Auckland Council website Shape Auckland is the online hub for all consultations. 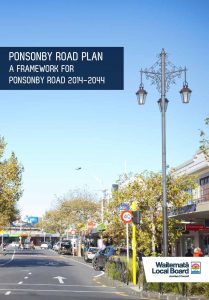 At our June meeting we adopted the final of the Ponsonby Road Plan that sets a framework for the development of Ponsonby Road over the next 30 years.  The process to draft a Plan got under way with my Notice of Motion in October 2012.  I am really delighted to have reached this point and thank all those who contributed, in particular, the members of the working group, all those who took the time to submit on the draft, Rebecca Sanders, Auckland Planner who put all the work in behind the scenes and Tricia Reade who brought her considerable enthusiasm to the project last term.

The Ponsonby Road Plan establishes five desired outcomes including recognising the area as a vibrant centre, protecting historic and cultural heritage and making the road safer for pedestrians and cyclists.

At the Auckland conversation in June,  Dr Tim Williams – CEO Committee for Sydney gave a beginners guide on Urban Regeneration and Renewal. Some highlights from his presentation that focused on “convergence” -how to achieve the best results through equalising disadvantaged parts of city with wealthier parts.

You can’t reduce cost of housing by building more because the price is determined by 90% of current stock.

To keep things the same you have to change 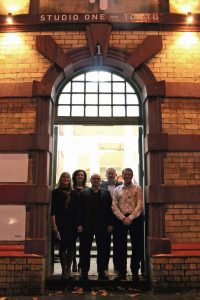 Reveal of Studio One

As acting Chair I had the good fortune to represent the Board at an event to reveal the new name for Art Station. My speech notes and a media release to announce Studio One are attached (ATTACHMENTS A and B)

The Committee with representatives of all the Central Local Boards (Chaired by Desley Simpson) met on 20 June to consider applications for grants from the Auckland City Cultural Heritage Fund (a legacy Auckland City Council fund for the purpose of conserving, restoring and protected valued historic heritage items).

A total of $23,326 was allocated from the second round of the 14/15 fund to 11 applicants (from a total of 18) with 7 grants made in the Waitematā Local Board area.  Details of the successful applications are available on the Council website.

On 22 May, the Board office was made aware of an incident at Hukanui Reserve, which is occupied by Kelmarna Organic Gardens in Grey Lynn. Ashes from a recently deceased client were scattered over parts of the garden.

I attended a blessing on site on 3 June which allowed normal activities to resume and a follow- up meeting to discuss next steps with all those involved. I’ve been really impressed with the sensitive way the issue has been handled and the commitment to ensure the gardens continue to flourish.

The Board is considering the application for a new lease at Hukanui Reserve at our July meeting (refer meeting agenda). If the Board agrees the granting of a new lease this will be advertised for submissions and officers will commence iwi consultation.

Congratulations to Isabella Lenihan- Iken who was elected to the Youth Advisory Panel as the Waitematā representative during June. The details are attached in the youth update (ATTACHMENT C). Isabella’s induction to the Panel will be held on 28 July.

There was a large turnout for the community meeting to discuss centenary celebrations for Myers Park next year.

Notes from the meeting are attached (ATTACHMENT D)

At our June meeting Auckland Transport reported on a number of small but important changes that have been underway in the City Centre aimed at improving the pedestrian experience. These are part of the route optimisation programme that is not just aimed at vehicle efficiency. For example:

These positive changes were covered by Transport Blog in more detail on 10 June.

At our June Board meeting we requested Auckland Transport extend the consultation period on the parking discussion document.

Due to the high level of interest on the issues raised by the discussion document the public consultation period has been extended to 31 July.

During June I attended meetings organised by the Freemans Bay Residents Association to discuss the parking approaches proposed by Auckland Transport to manage parking on residential streets. 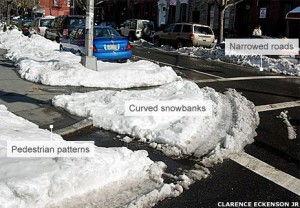 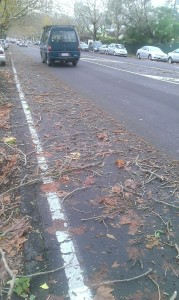 The June storm that brought down many trees in our area (including a large gum tree in Grey Lynn Park) also dumped lots of debris on our roads providing a unique opportunity to see how much road space is unused.  Streetfilms has coined the expression “sneakdown” for this phenomenon when it occurs after heavy snowfall (a shorter way of saying snowy neckdown and a neckdown is another name for a kerb extension).

On Franklin Road we have the perfect amount of room for a cycle lane!

That the Auckland Transport Report – June 2014 be received.

That the Waitemata Local Board:

A monthly update with Auckland Transport took place on  25 June. Current issues are reported back monthly by Auckland Transport on our public agenda including the details of the consultation undertaken with the Transport portfolio on behalf of the Board. 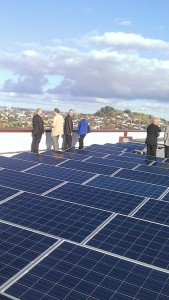 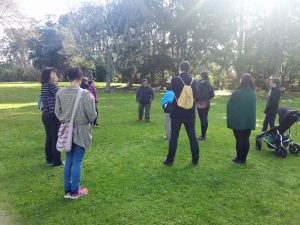 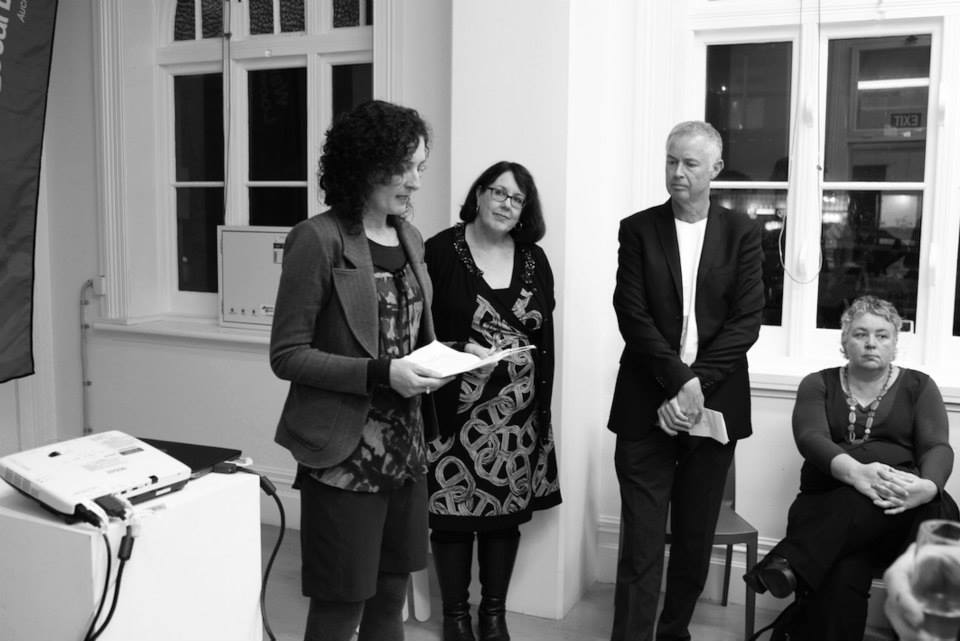 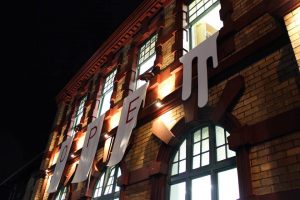 After a major refurbishment by the Waitemata Local Board, the new look Art Station was officially opened on 25 June as Studio One  Toi Tu.  As acting Chair I had the good fortune to represent the Board at an event to reveal the new name.

Welcome on behalf of the Waitematā Local Board and thank you, Louise [Louise Mason, Manager, Community Development, Arts and Culture]. It is fantastic to be here on such an exciting evening representing the Board. 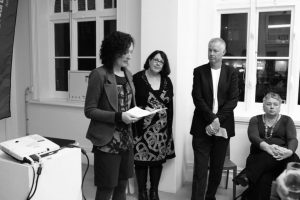 Shale Chambers, Chair of the Waitematā Local Board, really wanted to be here for the BIG REVEAL but unfortunately he is away for his 30th wedding anniversary (I think that is an acceptable excuse even if he is in the sun in Greece). With me from the Board are Greg Moyle (Arts and Culture portfolio holder with Shale) , Deborah Yates, Christopher Dempsey and Vernon Tava.  Rob Thomas sends his apologies. I’d like to acknowledge Tricia Reade who is here and was very much part of this project when she was on the Board.

As Louise has mentioned, we are in a very special heritage building, in the heart of a vibrant, passionate community.  I understand we are in fact in Auckland Council’s first creative precinct.

I’d like to acknowledge the founders and those before us who laid the foundations and kept a creative precinct alive through many challenges.

The Waitematā Local Board is highly aware of the changing demographics of residents and businesses in central Auckland. We know that we need to provide places and spaces that are flexible, versatile and meet the needs of our community within ongoing budget constraints.  This led us last year to take a fresh look at the precinct.

We pride ourselves on putting our communities at the heart of our decision-making but I recognise that it hasn’t been an easy process. I’d like to acknowledge and thank those who were involved in the extensive review and consultation process last year to develop a new vision for 1 Ponsonby Road.

The precinct is now a collection of collaborative spaces for artists, creative businesses and individuals, and community organisations to meet, to make, to learn, to listen, to practise, to create and to exhibit.

Creative people can propose, present and host courses, programmes and events – anything is possible here, and every idea is welcomed. To support the new vision, a new name and identity was needed to signal the change and to invite new people to explore and be part of the precinct and its spaces.

New names can be a risky. We want to respect and acknowledge the history of the land, the place and the people who have come before us. We want an ‘open’ name and identity: one that signals we are a community precinct that can be used by many different communities for many different uses in many different ways.

We also would like to clearly communicate the buildings’ many functions. So without any further delay, I take great pride in welcoming you all to STUDIO ONE – TOI TU, a place for many purposes, many people and every possibility.