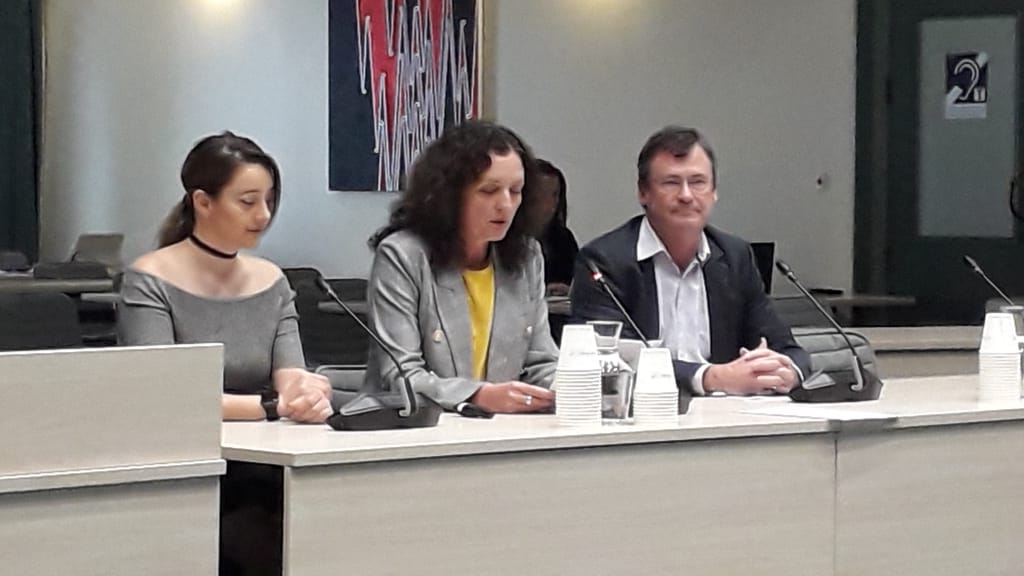 This report covers the period 10 April until 14 May 2019. It is on the agenda for the local board business meeting held on 21 May.

After attending the very moving Dawn Service at Auckland Museum I had the honour of speaking at the Grey Lynn RSC Anzac Day service on behalf of the Waitematā Local Board (photo right).  The board assists the RSC with funding for the event.  (My speech here).

The club does a great job bringing the community together for this national day of commemoration.

At the local board business meeting we received a report on the Annual Budget 19/20 feedback and resolved on advocacy priorities (Attachment 3).   A total of 223 submissions were received for the Waitematā Local Board area. The majority of submitters either supported (45 per cent) or partially supported (43 per cent) the Waitematā Local Board’s priorities.    I read all the submissions over Easter and was pleased to note the strong support for our overall direction and priorities.  Concerns raised tended to be about regional issues such as stormwater separation.

On 8 May Shale Chambers and I presented to the Finance and Performance committee with the support of board member Adriana Christie on our key advocacy iniatives that we wished to bring to the governing body’s attention (Presentation: Attachment 4)

Public consultation on Auckland’s dog rules closed on 10 May.  Auckland Council sought views on proposed changes to dog time and season rules to see more consistency across the region, as well as proposed improvements to dog management in Auckland.

Local board Chairs raised concerns with the Mayor about the bylaw process for local board input and the undermining of the shared governance model (Attachment 5).   Following a deputation of chairs meeting with the Mayor we received a positive response (Attachment 6) and agreement that local boards will be given an opportunity to provide their feedback to the hearing panel after the submissions and hearing report have been made public.

Looking forward, staff will continue to work with local boards on the Governance Framework Review and consider how future policy and strategy processes can provide for local board review of submissions and feedback. Staff will also progress the idea of a policy calendar through this review.

Through the consultation we heard feedback on the need for an off-leash dog area in Basque Park .  We have responded that this will be looked at following the completion of the dog rule consultation (Our Auckland: Changes on the way for Basque Park ) 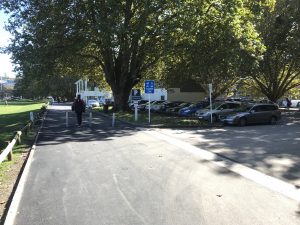 Since the earliest days of the Waitematā Local Board we have taken the approach that every renewal is an opportunity to improve on assets to deliver on community outcomes and best practice design.  We have LDI budget (Locally Driven initiatives discretionary budget) available for this purpose. We have consistently reinforced to officers that there is no such thing as a “like for like” renewal as standards have changed over time and every project needs to be considered in the context of current council strategies and plans.  This is a view I believe shared by all local boards.

The Council approach to renewals was recently highlighted when we were advised that “like for like” work was about to start on the entranceway to Victoria Park.  Despite several workshop discussions about the issues the local board wanted addressed such as safety we were not given the opportunity to have any input into the plans and only “notified” when the works were about to begin (photo above).

I raised concerns about the inadequate thought given to the current purpose and function of the entrance and access “road” that is an integral part of the park path network for recreational purposes and is an important commuter route (with numbers increasing as Wynyard Quarter expands and it becomes more and more difficult to walk along Fanshawe Street due to the numbers waiting for buses).

In response I was assured by Community Facilities that a renewal is not considered a like-for-like exercise and that discussions should be taking place with the Local Board regarding opportunities to leverage its asset base to deliver a better community outcome and that Community Facilities is focussed on place-based delivery.

With regards to Victoria Park, Community Facilities have agreed to install signage (photo right) and to consider design options for the resurfaced areas and are taking forward the Halsey Street footpath to park standard.

We’ve raised similar issues with Auckland Transport, in particular like for like footpath renewals that are not brought to the local board in advance for input. As a result AT has agreed to trial a new approach.

On 18 April I presented to the Auckland Transport Speed Limits Bylaw hearings on behalf of Waitematā Local Board. I spoke about why we support safe speeds as the evidence shows reducing speed limits works and delivers a range of benefits beyond road safety. Slower speeds are pro-community, pro-business, pro children. It will make our streets more accessible and safe for people of all ages and abilities. Slower speeds are also needed in the city centre to respond to massive changes that have taken place there. It is no longer a CBD but home to almost 60,000 residents.

AT received 30,000 feedback points through the consultation process.  The decision on the Speed Limits Bylaw will be made by the AT Board in July.

The 2019 theme for Road Safety Week was Save Lives #speakup. New Zealand is experiencing a crisis of road deaths and serious injuries. April was the worst month for road danger for over a decade. From listening to road safety experts over the last few years that I have been campaigning for a new Vision Zero approach, I’ve learned the following:

– safe and appropriate speeds
– safety must be prioritised in road design
– improvements to the safety of vehicles on the road
– enforcement particularly for speeding, red light running
– driver education 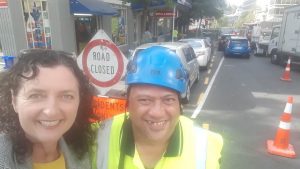 I took this photo (right) for Road Safety Week.

There is currently $10 billion of private construction underway in Auckland plus work on major utilities infrastructure. I’m grateful to all the traffic management workers like Albert who are keeping us safe around these projects. I’ve got to know Albert as he’s working on a new apartment building near the local board office. He gets a lot of grief from drivers trying to get around his controls in St Patrick’s Square but always keeps his cool.

On 8 March 2019 Cr Darby and I wrote to the Auckland Transport CEO expressing grave concerns over the status of the cycling programme.  The programme is currently three years behind schedule.  No new cycleway work has got underway this year and the walking and cycling team has been disestablished.

On 30 April we received a response confirming that AT remains absolutely committed to delivering the funded cycling programme and delivering on the specific focus area of the Auckland Plan – ‘Make walking, cycling and public transport preferred choices for many more Aucklanders’ but providing reasons why there have been delivery challenges.  (Both letters are attached to my report on the local board agenda) 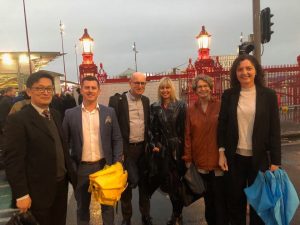 On 10 May I attended the Dawn Ceremony for the Downtown Infrastructure Development projects. Ngāti Whātua Orākei led proceedings on behalf of mana whenua.

Cr Darby reported “that it was great to share the morning with people who have been instrumental in directing the waterfront transformation in recent years” – Cr Richard Hills, Viv Beck (Heart of the City GM), Noelene Buckland (Chair, City Centre Residents Group) and Pippa Coom. Cr Paul Young got up early too to join us”. (photo right)

The ceremony marked the commencement of the major works to deliver:

The work to deliver seven interrelated projects in time for Americas Cup 36 is hugely complex but I believe will be worth the temporary disruption as Downtown becomes a stunning pedestrian friendly area. 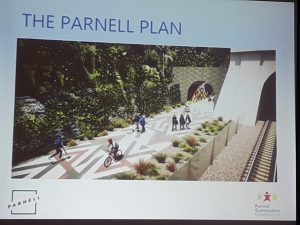 A visualisation of the proposed Waipapa Greenway via the old Parnell railway tunnel was first revealed at a public meeting hosted by Parnell Business Association and Parnell Community Committee on 7 May that I attended.

This image created by Jasmax is in the new Parnell Plan (about to be published).

I have been providing regular updates on Western Springs following complaints about the water quality of the lake and maintenance of the park. In my May Ponsonby News update covered the maintenance work underway (Attachment 10)

Meetings and workshops: 9 April until 14 May

Events and functions:  9 April until 14 May