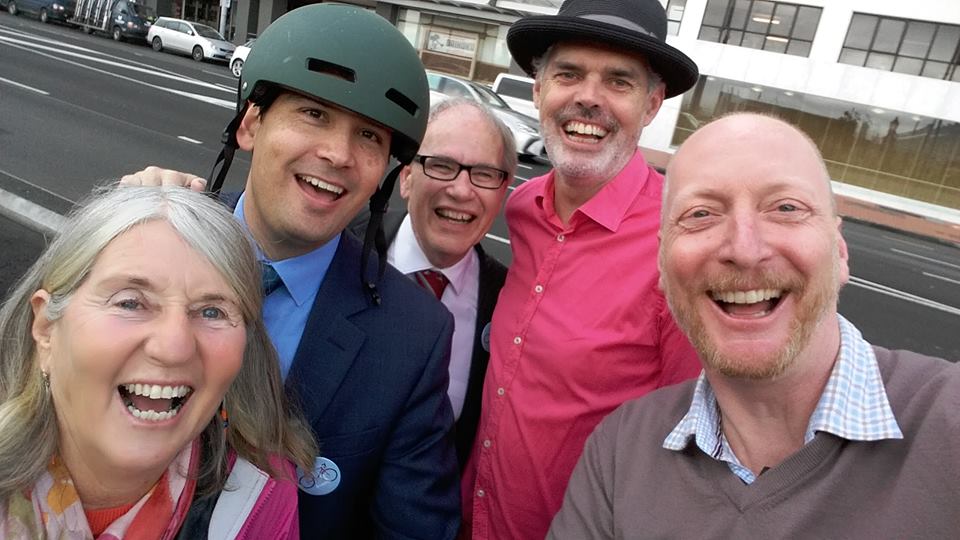 It would have been hard to imagine even a few years ago politicians flocking to the opening of a cycleway.  In fact there were hardly any cycleway openings in Auckland until the PM opened Grafton Gully cycleway in September 2014.   However that all changed when serious investment in cycling got underway thanks in part to the Urban Cycling  programme. The additional government funding matched with Auckland Council interim transport levy funding  is starting to have an impact.  As the network of cycleways grows on busy routes cycling numbers are increasing with a doubling of numbers coming into the city centre in the last year.

Protected cycleways like the new one on Quay Street feel safe and pleasant to ride. They attract commuters, recreational riders, tourists and families with children.  They unleash the huge latent demand for opportunities to ride safely.  They are good for businesses , good for health & wellbeing and good for improving the liveability of Auckland*.  It is not surprising politicians of all colours want to celebrate when new cycleways open!

Auckland’s waterfront will be an improved urban space and an even busier cycle route following the opening of the Quay St Cycleway today.

The Prime Minister, Transport Minister Simon Bridges, Mayor Len Brown and a large group of people on bikes, were the first to use the city centre’s newest cycleway. The opening was preceded by a dawn blessing with Iwi representatives.

A new cycle counter on the promenade, a first for Auckland, will highlight the number of people cycling along one of Auckland busiest routes.

On the waterfront side of Quay St, the 1km, two way cycleway goes from Princes Wharf at Lower Hobson St to Plumer St. The $2.18m cycleway is being delivered by Auckland Transport and has local funding and an investment from the Government through NZ Transport Agency and the Urban Cycleways Programme.

It will benefit everyone who spends time at the waterfront and will encourage more people to start cycling into the city centre says Kathryn King, Auckland Transport’s Cycling and Walking manager.

“Having a dedicated cycleway like this means there is more space on the promenade for people to walk and enjoy the harbour views. The planter boxes, which provide protection from traffic, improve this wonderful space by adding some greenery.

“The cycle route into the city centre along Tamaki Dr is the busiest route in Auckland, and this will make cycling from the east even more attractive. Providing a protected cycleway on Quay St gives people working in the downtown area greater travel choice and an excellent cross-town route that avoids a lot of city traffic.”

Mayor Len Brown says it’s another important chapter in his vision for Auckland as the world’s most liveable city as it transforms the city centre into a pedestrian and cycle friendly destination.

“This project is another example of Auckland Council, Auckland Transport and the Transport Agency working well together to achieve a great outcome.”

Bike Auckland, chair, Barbara Cuthbert says the cycleway is a great addition to downtown Auckland. “It’s hugely exciting to have a safe separated space for people cycling and those walking close to rail and ferry services.”

The three-metre-wide cycleway connects with the Beach Rd Cycleway at Britomart Pl and by the end of 2018 will link with the Nelson St Cycleway and Westhaven to City Cycleway at Princes Wharf and the Tamaki Dr Cycleway.

Auckland Transport is working with project partners Auckland Council and the Government through the NZ Transport Agency and the Urban Cycleways Programme on a $200m programme of cycle improvements from 2015 to 2018.

Cycling in Auckland by numbers

A gray, sunny day for lots of joy on Quay Street – Bike Auckland

*Benefits of investing in cycling in New Zealand communities – NZTA