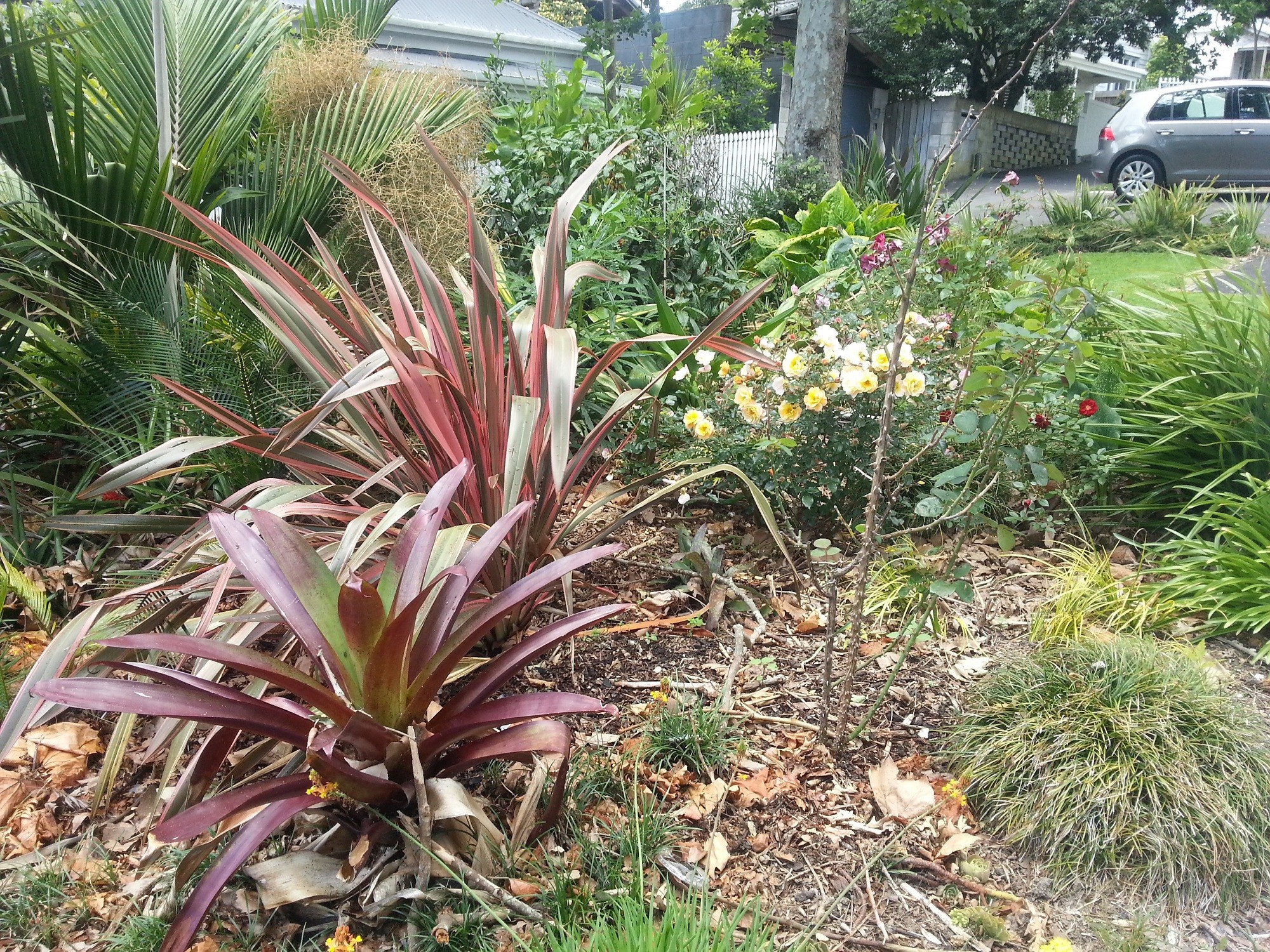 This is my final report for 2016.  In it I focus on the transport issues I have continued dealing with in the transitional period between the end of last term and before board responsibilities are confirmed at the December board meeting.

I also highlight end of year activities and events as a busy year comes to a close.

Many thanks to everyone who works to support the board over the year.  A special shout out to all those who take the time to read monthly reports!

Season’s greetings and best wishes for 2017.

I responded on behalf of the Board to the following consultations. The feedback is available on the Auckland Transport Update – December 2016 attached to the Board’s agenda: 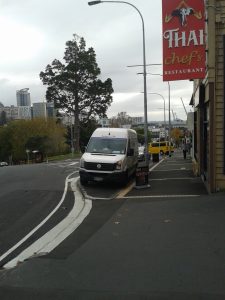 An issue has been dragging on for some time regarding the greening of a pedestrian buildout on Parnell Road/Parnell Rise installed by Auckland Transport in 2015.  Auckland Transport, at the request of the community, agreed to add greenery to the buildout. A tree pit in this location is not possible due to underground utilities however Auckland Transport has refused to go ahead with raised planters until Auckland Council agrees to fund the consequential opex.

The attached photo provided by the Parnell Community Committee shows why greenery in this location is needed to improve the amenity of the street environment and stop illegal parking.

We are working to resolve this issue in Parnell and at other locations and as a result are also proposing to add the following advocacy item to our Local Board Agreement 17/18 (to be consulted on in February).

Street trees and greenery – Auckland Transport to provide opportunities for greenery in every streetscape improvement and renewal and Auckland Council to meet the consequential operational expenditure for maintenance. 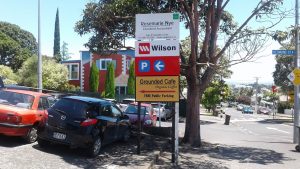 Wilson’s parking has installed signage at the Auckland Transport controlled car park on Pompallier Terrace that is deceptive as it gives the impression the area allocated to P60 parking is pay and display. I was alerted to this issue by a constituent who observed drivers feeding Wilson’s parking meter to park in the free parking spots. The Auckland Transport parking team are currently investigating.

Now that the Freemans Bay Residential Parking zone is in operation Ponsonby residents have complained to me about the difficulty of finding parking and have requested that the Ponsonby scheme, consulted on earlier in the year, get underway.  Auckland Transport parking team recently provided the following update:

AT is aware that the effect of parking displacement would be likely and has tried to minimise the period of time between the Freemans Bay parking zone going live and being able to install the proposed Ponsonby parking zone.

There are however considerable pieces of work which have to be completed before a parking zone can be implemented and have endeavoured to proceed as quickly as we can using our available resources.

AT will send a letter out in the week commencing 5th December inviting permit applications. This will provide details of this process and when the application window closes.

We expect the residential parking zone to go live by end of February 2017.

I have raised with Auckland Transport a number of issues regarding the safety and amenity of the street environment surrounding the Countdown development on Williamson Ave.  The developers have complied with their resource consent requirements so it is now for Auckland Transport to resolve issues that have come to light since completion.

The response I have received from Auckland Transport is attached.

I also secured three new tree pits on the kerb extension between Williamson Ave and Rose Road.  Two of the new tree pits have been planted but one remains empty due to drainage issues that are being followed up.

There is a great deal of community interest in gardening on the grass verge.  We have been waiting for some time now for Auckland Transport to confirm the rules that apply.

The Board passed a resolution in December 2014 supporting the development of guidelines. Local Boards gave feedback in September 2015 to Auckland Transport rejecting the first draft. We have been waiting since then for an updated version to comment on. We’ve been told the guidelines are now ” imminent”.

AT has found themselves in an unnecessary pickle over the whole issue. If AT had just recognised Local Board’s place making role in the first place and involved boards in the drafting of guidelines we could have had this all sorted ages ago. The most recent article to appear on this issue is below (Central Leader, 2 December): 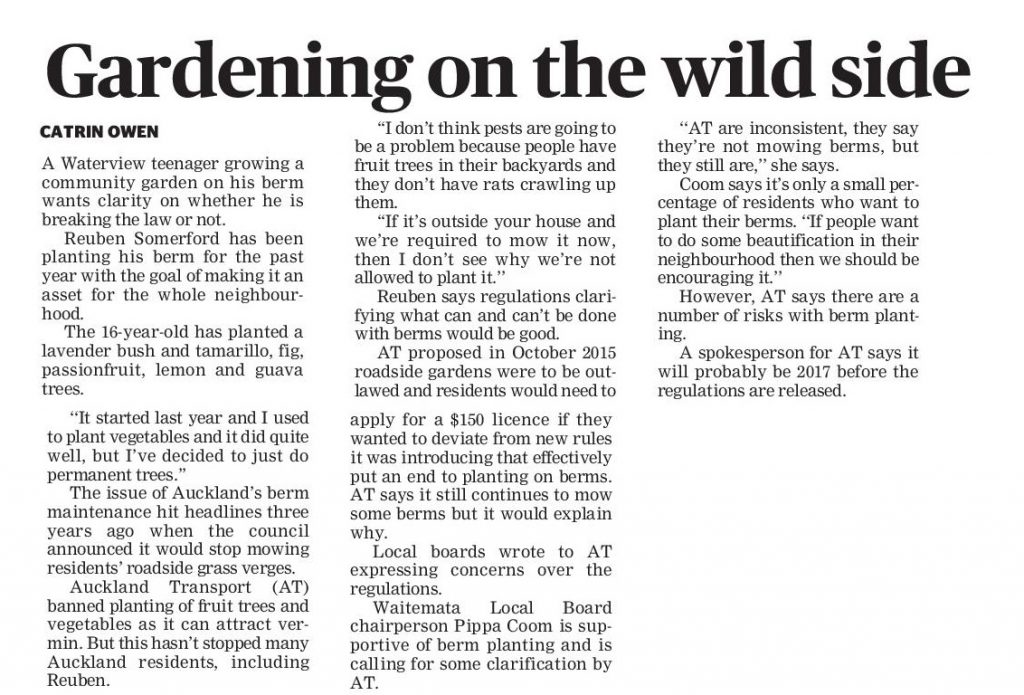 Meetings and workshops: 14 November until 13 December

Events and functions:  15 November until 13 December

Griffiths Garden opening: A pop up garden featuring seating, picnic tables and play equipment, garden shed for gardening tools and bike repair gear. Also a community fridge, sponsored by the Love Food Hate Waste project. Donors will be able to leave unwanted food items for others to make use of. The community fridge pilot will be in place until Christmas.

Griffith Garden will also become a central teaching hub for the city bee collaboration project, ‘For the love of bees’ in 2017. The Garden is the brainchild of the Auckland Design Office and is funded from the City Centre Targeted rate.

I spoke at the opening to acknowledge all the people making cool, innovative, creative things happen in the city centre. 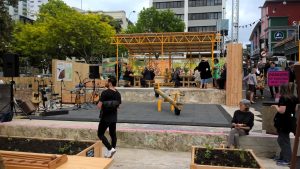