OPINION  first published in the Herald NZ on 26 February (premium content) with the heading:  Humble orange cone means the future is coming

I was fortunate to attend a recent celebration hosted by managing director Mark McGuiness to welcome the new residents and thank those involved in the development. Inevitably, the conversation turned to Auckland’s prolific orange road cones.

Orange cones have become a convenient focus of rage for some commentators in Auckland.

In McGuiness’ view the cones are a positive symbol that the city is getting stuff done. They show progress is underway, and the city is improving after decades of under-investment, poor planning and short-sighted decision-making.

I think of it as Auckland moving from a town with a cowboy mentality focused on short-term gains, to Tāmaki Makaurau, a truly international city with a uniquely indigenous point of difference.

Auckland Council is making progress on the things that matter for our city. We’re working to stop poo from entering our harbour and we’re getting on with essential work such as improving our ferry infrastructure and ensuring the Quay St sea wall doesn’t collapse.

We’re delivering new public spaces and creating the right conditions for new residential, retail and office investment. I don’t think it makes sense for any of this construction to be slowed down or stopped.

When the cones are removed from Quay St a stunning street will be revealed; one that will never go back to a four-lane road. Just as other international cities have embraced their waterfront, Quay St, together with a new downtown square, will be our welcome mat for international events happening in 2021. Slow speed, pedestrian-focused environments will become the new normal in our city centre.

It is time for Aucklanders to move on from the myths that “public transport is rubbish” and “no one uses cycle lanes”. All the evidence (that could fill a separate column) points to the opposite.

We are no different to people in other international cities. We embrace the most convenient, reliable and affordable transport option. We jump on bikes when we feel safe. We shop, relax, linger and spend in inviting places where people – not cars – are king.

Wynyard Quarter was the “guinea pig” for perfecting placemaking in Auckland, but this best-practice approach is now spreading benefits across the city.

It is also time to drop “CBD” and instead refer to it as the city centre as it has a growing residential population, with more than 33,000 people already calling it home.

The work symbolised by the humble orange cone work will benefit not just the residents I represent, but all Aucklanders, because a functioning, thriving city centre is good news for our region and our country.

Our city centre generates a fifth of Auckland’s GDP and more than 130,000 people work there.

Our biggest infrastructure project, City Rail Link, will double the number of people who live within 30 minutes of the city centre when it opens in 2024.

Along with our construction partners, we have to do more as a council to share the vision of what is happening in the city centre so Aucklanders can see the wider benefits. We need to ensure traffic management is exemplary, projects are coordinated and efficiently managed, and that businesses and residents are looked after through the construction. We must help all those who need to travel into the city regardless of transport mode.

Collectively as Aucklanders, we’ve got to put the orange cone “chaos” into perspective. When I recently missed an early morning flight it wasn’t cycleway construction that delayed me getting to the airport. It was the traffic I created, other traffic on the road, and a minor crash. These types of delays are so commonplace Aucklanders consider this a “normal” inconvenience.

I agree with McGuiness that we shouldn’t turn orange road cones into the enemy. When the first stage of Wynyard Quarter opened in August 2011, Aucklanders were amazed at the welcoming transformation and flocked to the waterfront. As parts of downtown are completed and pedestrians are welcomed back, I have no doubt that we’ll get the same reaction.

Delivering people-friendly, safe and vibrant environments continues not just in downtown but across the city. We can all feel proud at the stuff that is getting done. The future is in progress.

• Pippa Coom is an Auckland Councillor for Waitematā and Gulf Ward. 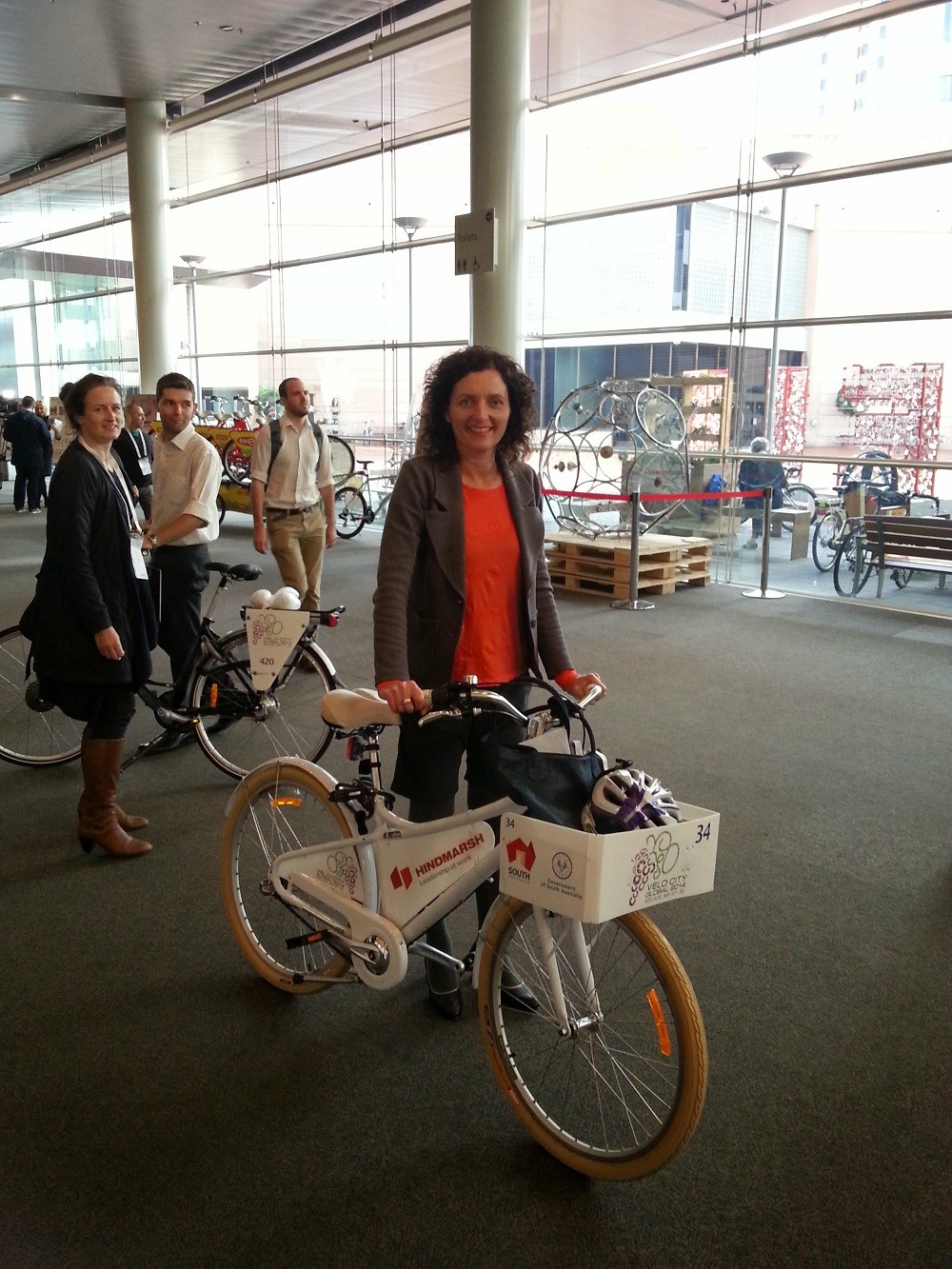 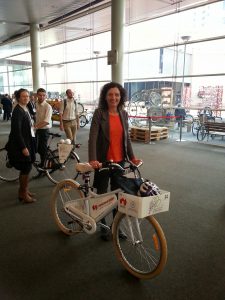 I attended a very special celebration of cycling at the Velo-City 2014 conference in Adelaide in May with member Christopher Dempsey from the Waitematā Local Board. It was the first time the world’s premier cycling planning conference has been hosted in the southern hemisphere to offer opportunities for cycle advocates, practitioners, decision makers, policy makers, planners, engineers etc. from around the world to come together for four days to discuss ways to create and sustain bike-friendly cities. The conference provided valuable lessons from countries and cities where cycling is a valued part of daily transport and recreation.

Like Auckland, Adelaide has got a long way to go to be a great place to cycle but it was encouraging to see a recent commitment to cycling with new bike lanes and bike parking.

The key themes I took away from the conference are:

Here are some of my conference highlights from the many speakers: 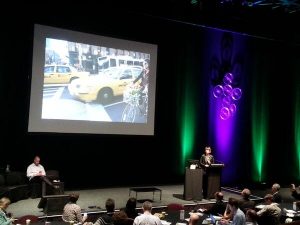 Janette Sadik-Khan:  Bike to the future (transformational leadership in action)

The former NYC Commissioner of Transportation came to Adelaide straight from a tremendous Auckland reception and Auckland Conversation presentation (including a Frocks on Bikes ride which was one of the most inspiring, fun and exciting bicycle rides I’ve ever been on). Some of her key points:

She emphasised the importance of public consultation and that in NY they relied extensively on public outreach that provides the opportunity to better understand what people’s key issues are and that by helping them with these issues, it’s often possible to turn one’s biggest opponents into huge advocates.

Key message: So many to chose but I liked her observation that people are ahead of the press and politicians

Ethan Kent, Project for Public Spaces is another of the Velo-city speakers that we are fortunate to have hosted in Auckland recently.  He is a practitioner of “lighter, quicker, cheaper” for short term trials or experimental projects.

Bojun Borkman-Chiswell: Bicycle journalism, solo film making, the unearthing of a global cycle and the almost certain future of cities 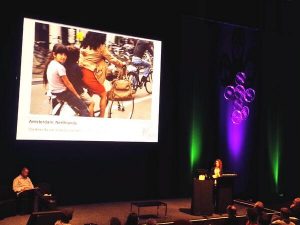 In a challenging and confrontational presentation Bojun brought a feminist perspective to the conference. She gave voice to women all around the world who rely on the bicycle but are being severely disadvantaged due to the politics of road funding and building.

She called on the male sports culture dominated bicycle conversation to stop to make way for women. She said we need to look at the emancipation of women as the key to returning liveability to our cities.

Key message: Make it fun, free and fashionable and women will ride

Niels Hoe:  Cycling as the engine for financially and socially sustainable cities

The people in Copenhagen are the happiest on the planet and says Niels it is no coincidence that it is also a great place to cycle. His presentation focused on the economic benefits of a city for people who walk and bike – those that have the time to see what is in the shop window

He noted the huge health benefit savings of moving from a car-dependent culture to a community that integrates active modes of transport. The quickest thing we can do he says to meet the challenges of our time (global warming, obesity crisis) is reappropriate road space.

His research showed that whether we will change our behaviour and our travel choices are influenced by where we live and what form of travel is intuitive.

Key message: Nothing great was ever achieved without enthusiasm!

Jonathan Daly:  is separation the answer? 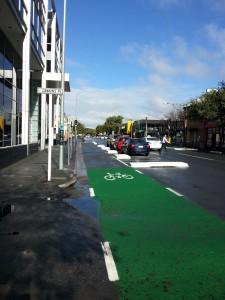 In a session on treating our streets as public space, behaviourologist, urbanist and designer, Jonathan Daly challenged the decision makers to ask the right question (and to look at who is asking the questions).

He says that if the starting point is that it is all about infrastructure this becomes problematic. If the answer always is separation this can end up creating more problems than it solves.

Key message: There is no silver bullet – a whole lot of things will make an environment intuitive.

Leadership challenges in treating cities as public space: Presentations from Mayoral representatives from around the world: 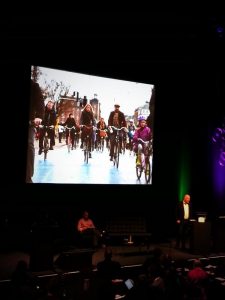 If you want people to meet and interact get them out of their car so they use their feet was the message from Vienna.

Lord Mayor of Adelaide, Stephen Yarwood gave a presentation on leadership aimed at elected representatives with his 8 key points.

Like other speakers Steven spoke about our cities being intuitive to drive but not cycle. He looked at design to convince women to live in bike- focused housing . For example being able to take a cargo bike right into the kitchen (like the car in the internal garage)

Craig Richards:  bike riding is booming – but is the current progress quick enough?

The Victorian advocacy group Bicycle network  has a campaign to petition the PM of Australia to commit $7.5bn to fund $7500km of cycle lanes based on the following simple numbers: 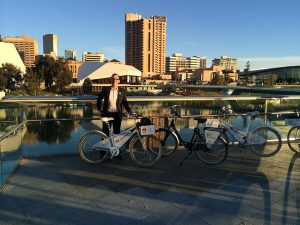 Following on from Janette Sadik –Khan I think Tim (photo right) was one of the most relevant speakers for Auckland because San Francisco has adopted many of the same strategies as NY to achieve sustainable streets with impressive results.  Like Auckland, SF also has one agency and is taking a multi-modal approach. Some of Tim’s points:

Key message: All politicians in SF now run on a platform of “complete” streets- won’t win and look foolish if don’t

The conference closed with Florian Lennert of Innoz who discussed intelligent cities using Berlin as a prime example.

“In God we trust – everyone else bring data” – Mayor Bloomberg (quoted by Janette Sadik-Khan in her presentation). Some examples of the data presented at the conference: 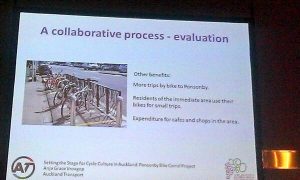 It was slightly surreal to be celebrating the installation of one bike corral in Auckland at a conference dominated by bike-friendly countries with bike parking buildings for 30,000 bikes.

But regardless of what you think of the video made to show at the conference (described by Transport Blog as “tone deaf”) even the Europeans were impressed with the research that Auckland Transport has undertaken on the use of the bike corral and the economic benefits. Anja Vroegop   (Auckland Transport – Community transport team) presented the evaluation of the trial including:

Three other members of the Auckland Transport team gave presentations at the conference. I’ve asked them to present to the Waitemata Local Board at one of our workshops so that all members can have the opportunity to discuss what we learnt from the conference.

Christopher Dempsey in his presentation in the last (but well attended) session of the conference themed “peddling cycling to the pollies” said that he had more rights in New Zealand as a gay man than as a cyclist. 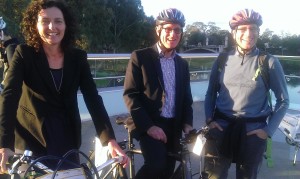 My conference registration and my airfare to Adelaide were paid for from the Local Board professional development budget.

Thank you for the opportunity to attend the conference. I came away grateful to have been inspired by amazing people who have achieved fantastic results.

It can often feel that we have an overwhelming amount to do to provide genuine transport choices in Auckland and that we are never going to get the cycling network built (in my life time anyway). Therefore it was encouraging to hear Janette Sadik–Khan say on her visit that it felt to her as if Auckland is at a tipping point and has the potential to be a great place to cycle. As she says – it is just going to take vision, political courage and advocacy.