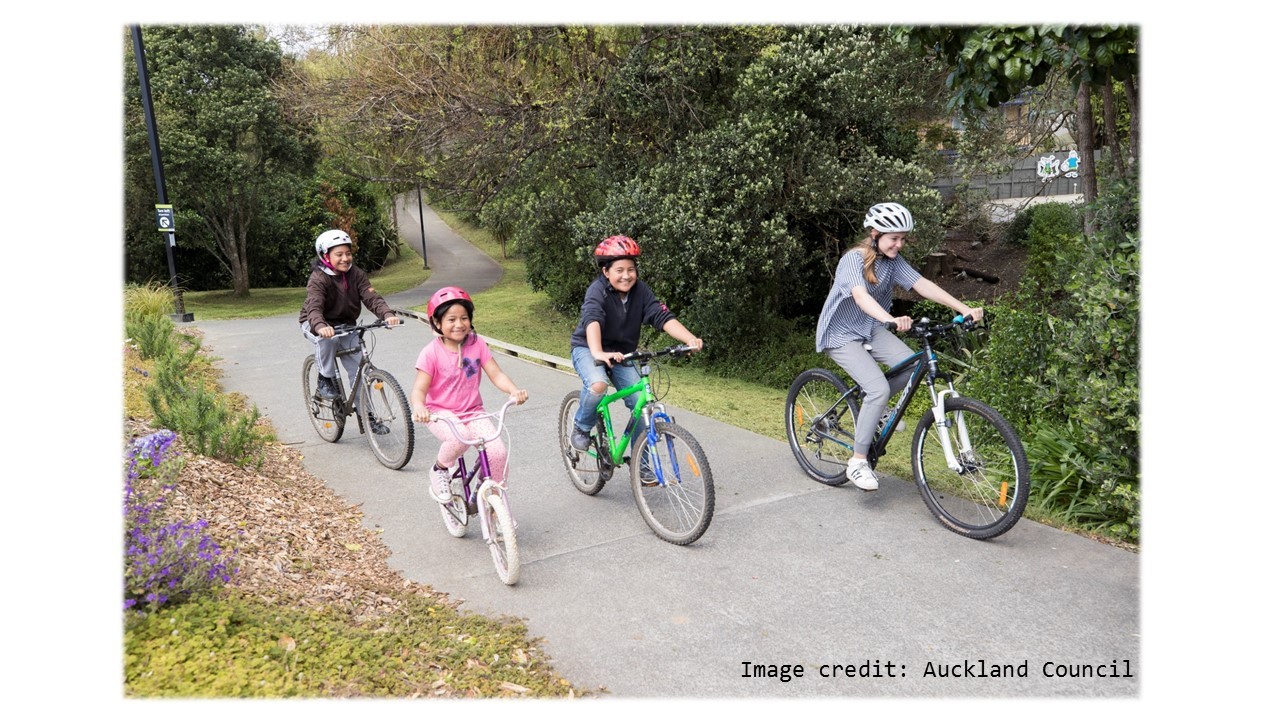 From the fringe to mainstream: the politics of gaining community support and delivering successful cycling infrastructure for the future 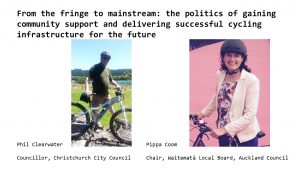 At the Asia-Pacific Cycle Congress held in Christchurch 17-20 October 2017 I presented in a session on the theme of Community Engagement in collaboration with Christchurch City Councillor Phil Clearwater. We thought it would be interesting to present our respective political takeouts and to provide a space to discuss what the politics of gaining community support and delivering successful cycling infrastructure  is looking like with other politicians, advocates and people delivering on the ground. It is also an opportunity to contrast the Christchurch way with what is happening in Auckland.

Slide 1:  My background is as a cycling advocate. I came to politics as a committee member of Cycle Action Auckland (now Bike Auckland) and co-organizer of Frocks on Bikes in Auckland ( shout out to Bella & Leah the co-founders of Frocks about to celebrate the 10 year anniversary next year) . When I first got involved in advocacy almost 10 years ago it was as part of a smallish but growing group of activists responding  to the question Why would anyone cycle ?  (especially in Auckland that is  of course too hilly, too wet and too humid etc). I was told there was no votes in cycling as it was too fringe!

Last week Michelle, who works for the WA state government got in touch for a coffee before the conference. She told me she was a fan of the global leadership of Auckland – I’ve never heard that before! But as we are going to hear from presenters over the course of the conference Auckland is experiencing unprecedented transformation into a cycling city.

I’m presenting my personal thoughts on how we are going in Auckland from a political perspective .

It looks like we have a number of complimentary presentations that consider bike lash and from the trenches perspectives – it is of course not all plain sailing.

Slide 2: I’m going to presume that non Aucklanders are at best only vaguely familiar with our unique governance arrangements.

Since 2010 we’ve had the super city of 21 Local Boards focusing on the local stuff – playgrounds, community centres, libraries etc and an advocacy role rather than a decision making role for transport. A mayor and 20 councilors of the governing body responsible for regional decision making and setting the vision and strategy for Auckland.  Chris Darby councillor for North Shore is here.

Auckland Transport – one of the arguably missed named council “controlled” organizations-  is responsible for all transport functions and operations including consulting on cycling projects.

I’m chair of this area [slide 2], the Waitemata Local Board covering the city centre and central suburbs of Auckland.  For 7 years I’ve also held the transport portfolio lead.

Slide 3: The foundations of the move from fringe to mainstream started long before 2010 but in Auckland the radical realignment of the cycling universe received a big bang boost with the formation of the Super City.

For the first time a pro-cycling Mayor was elected together with pro- cycling Local boards and councilors (admittedly only a few to start with).  But it opened the way for political support for an all of Auckland cycling strategy backed up with meaningful budget.

At the time we wanted to use a regular people on bikes photo in our first local board plan 2011 – all the Council’s photo archive could come up with was what looked like a man in high viz being chased by a car! This image (slide 3) was our more idealized vision of the future thanks to board member Jesse Chambers and her Green friends.

Slide 4: Giving the Mayor and politicians wind in their sails was the work of the advocates groups who had been creatively working away building a ground swell of support and were ready to seize the new possibilities of thinking big.   Who would have imaged that we would have a award winning magenta cycleway on disused motorway off-ramp delivered in 16 months – but it was Bike Auckland who were instrumental in planting the idea in the first place!

Shout out to our advocates:

And the many speakers from overseas introduced to us through events like Auckland Conversations and experts like Dutch Bicyle Embassy, Tyler Golly  who’ve come to Auckland to broaden our horizons.

Slide 5: The awareness raising by activists has led to unprecedented public feedback supporting investment in cycling.

This graph is from the Annual budget consultation in 2015 that led to the introduction of an interim transport levy.   Cycling and walking is a close second to public transport in the transport area that submitters think Council should focus more on .

For our recent Local Board plan consultation we had 80% approval that we were on the right track.  In fact we received feedback that we should be bolder and deliver faster.

Slide 6: As we know the winning combination of  strong public support and feel good projects brought the politicians with the big bucks along for the ride.

John Key came on board in 2013 with the $100m urban cycling investment fund – anecdotally I’ve heard he was strongly influenced by the positive feedback he received from all the baby boomers coming back from riding Great rides and wanting to keep cycling.   (I was honoured to be on the investment panel with Glen Koorey, Richard Leggat who are here, supported by an impressive NZTA team – Claire, Rebecca, Duncan, Gerry who did all the work )

In this photo at the opening of the Quay St cycleway there are at least 10 politicians all hustling to be seen on a bike!

Slide 7: I’ve heard it said you need a trifecta to make cycling happen: Mayor/leadership + advocates is completed by the  “plangineers.” I credit this to Timothy Papandreou,  then Director of Strategic Planning & Policy at the San Francisco municipal transportation agency who I heard speak at Velocity 2014 but he might have been quoting  Janette Sadik Khan . A special mention to those people with the skills to plan, design and build the cycleways.

So in the western area of Waitemata covering Grey Lynn and Westmere major routes are now complete, underway or about to start.

Slide 13: That is a hell of a lot of cones appearing on our streets and a lot of construction. In saying that I acknowledge that we know nothing about cones and construction compared to Christchurch.

Slide 14: For me it is great to see the progress that is underway.  I feel it shows momentum after a slow start.  We can see the network effect taking shape.

When I see scenes like this I tear up. It is why I got into politics.

We’re all happy then?  Living the dream ….

Admittedly these are the comments of one person but she is reflecting the stirrings of community dissatisfaction now that construction is actually underway and having an impact on people’s lives.

There are some key themes:

This is not necessarily all negative.   Had to add a bouquet just to restore the balance!

Slide 16: Putting the construction into context

Change is a constant

Preparing for tram service on Richmond Road in 1910

Slide 17: Just over a hundred years later we are preparing for bike lanes on the same spot

Along with that is going to be a change in how these shops function and work as a “Village”.

Slide 18: Everyone has to have their own “see the light” experience – whether it is from travelling overseas or a direct experience of the benefits of getting on a bike

Kathryn’s team is doing a great job bringing together the data but we need more NZ examples demonstrating the economic and societal benefits.  I soak up what I hear from overseas experiences – for example the lessons from Canada shared by Tyler Golly in the photo – but there is distrust of what has happened outside of NZ and a view that it doesn’t apply here.

Slide 19: In Auckland we do have a unique political situation. I am a fan of the Super city as it has improved local democracy and stopped political meddling in delivering  transport solutions for the benefit of everyone.

But at the same time it has removed the community from the transport decision making process.

I’m looking forward to Kathryn’s presentation about the lessons from the trenches on doing engagement differently so I won’t go into that in detail here but communication and bringing the community along is definitely key. [Wellington City Councillor Sarah Free in her presentation in the same sessions made very good points about the lessons from the Island Bay cycleway experience including delivering a project the whole community can feel proud in and working closely with businesses and residents]

Of course we need to keep working to elect pro-cycling representatives.   [In the photo] Jessica Rose, fellow Frocker was recently elected to Albert Eden with her colleague Margi Watson who was instrumental in delivering the waterview path and is a recent convert to e-cycling

Get people on the inside doing the great work

Slide 20:  I think it has been interesting to put together this presentation and attend the conference at a time of huge change resulting in bike lash.

It has been great to meet up with and acknowledge the many people on this journey.

Together I think we are going to ride this through (hopefully with renewed funding from the next government).   At future international conferences I am sure Kathryn will be doing presentations on the Auckland story of cycling success!