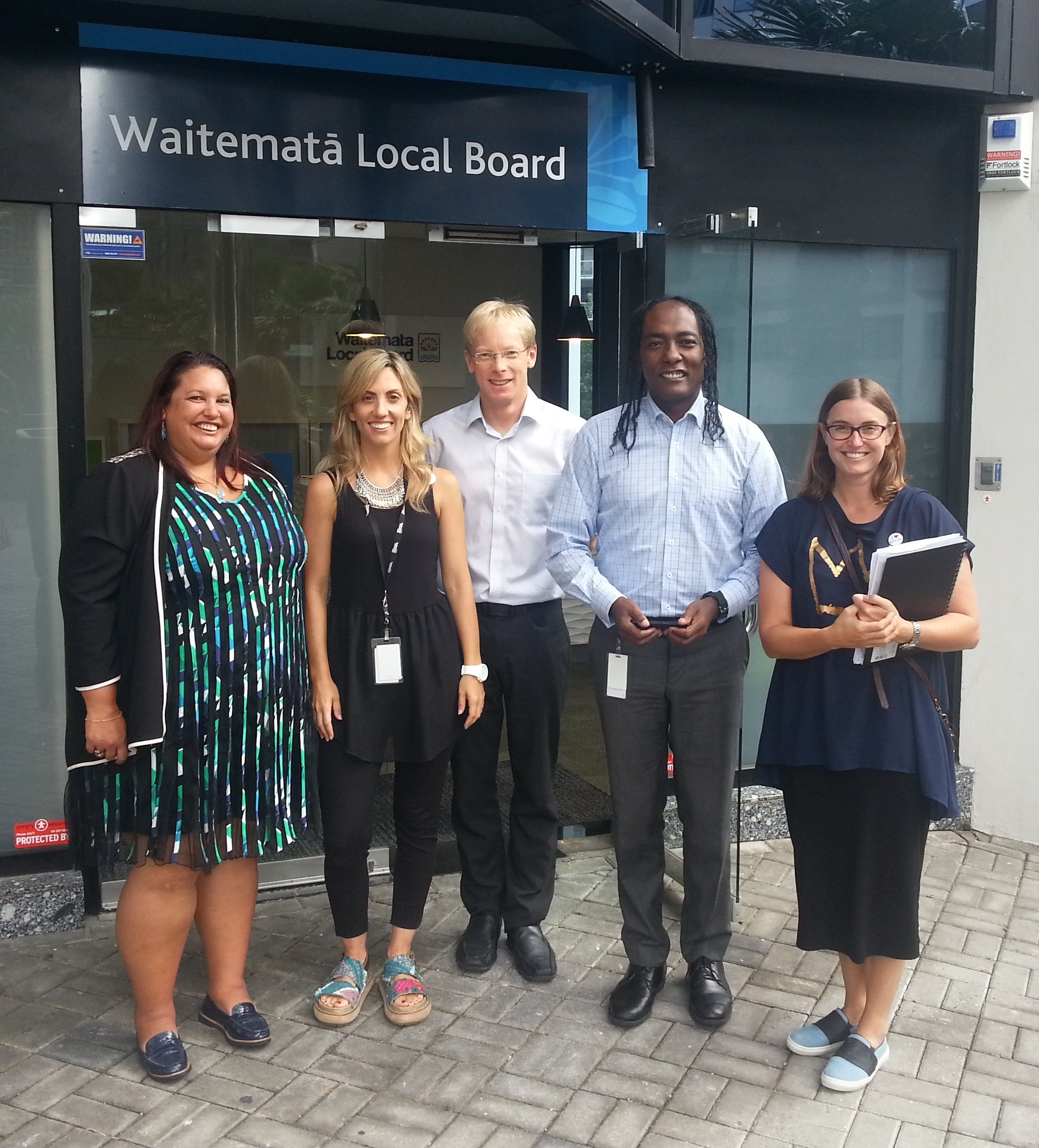 This report covers my Waitematā Local Board activities from 1 March – 31 March 2016 as Deputy Chair, lead for the Community and Transport portfolios, and Chair of the Grants Committee, and with positions on the Ponsonby Business Association Board and Ponsonby Community Centre Committee and Board liaison for the Parnell Community Centre. 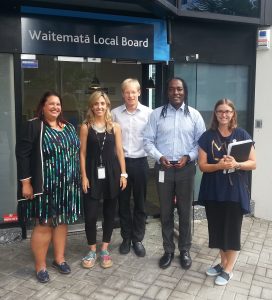 On 2 March the Board officially moved into our new offices at 52 Swanson Street just off St Patricks Square.  The offices are a huge improvement on our location at Graham St and provide a much better working environment for our hard working Local Board services team (photo right) and space for board members. I like to think we now have a “democracy shop”- a front door to our community that is easily accessible and welcoming.

The Waitematā Local Board grants committee met on March to discuss the grant application to the Quick Response Fund and the Local Grant fund. In total we had $70,330.58 remaining  to distribute from the 15/16 financial year with one Quick Response Grant round to go (currently open until 6 May for grants up to $3000).

The grants committee minutes and recommendations for the Local Grant Fund are attached to the April agenda.

Consultation on the Council’s Annual Budget 2016/17 and local board priorities took place until 24 March.  Community meetings in Ponsonby, Grafton Parnell and Grey Lynn were well attended but the official Have your Say consultation meeting at the Town Hall attracted only 4 members of the public.  The low attendance may partly be due to the number of events on that evening but I think the problem is mainly with the format which is very unsatisfactory for groups that wish to present feedback.  The Board’s public hearings style meeting held on 10 March provided a much more effective forum for presentations to the Board. 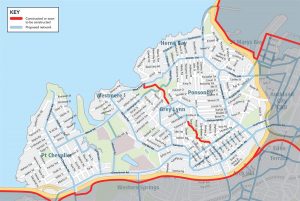 During March Auckland Transport consulted on the network of cycling routes in the inner west area (map right) and asked for feedback on cycling improvements to make riding a bike for local trips safer.  The feedback period was extended to 5 April.

I attended the consultation events in Grey Lynn Park on 13 and 20 March.

This is the first time that Auckland Transport has consulted on the actual routes that make up the Auckland Cycle Network and support the routes in our Greenways plan. 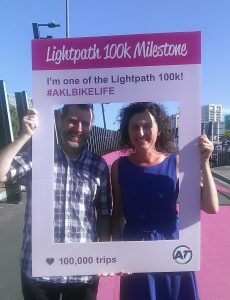 The electronic counter doesn’t lie!  The aphorism “Build it and they will come” proved ever so true when it comes to the amazing magenta adventure.

Christopher and I were very happy to celebrate the 100,000 trip over Lightpath since opening day on 3 December 2015.  Almost 1,000 people a day are riding the route.

There are also huge numbers of people enjoying Lightpath on foot at all times of day and night. Unfortunately the walking counter has not been working so Auckland Transport is unable to provide exact data at the moment. 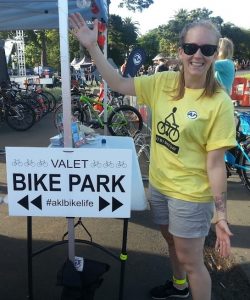 The Lantern Festival, held for the first time in the Domain in February was the first Auckland Council funded evening event to promote active transport. The valet parking provided at the venue was a big success working to encourage people to give cycling ago – many bringing along children. However the overall communication and coordination regarding transport to the event was not well managed by Auckland Transport and there were a lot of lessons for next time.  I have sent the following email to the CEO of ATEED and the Manager Event Design who responded that it would be included in the mix for their debrief.

Congratulations to everyone involved on the success of the Lantern Festival (if the numbers attending are the best indicator of success!). I really enjoyed attending on the Friday and Sunday evenings.

I’m sure there will be a big exercise underway with Auckland Transport to look at the transport management plan and the messaging for the event next year. I just wanted to give some feedback while it is still fresh in my mind: 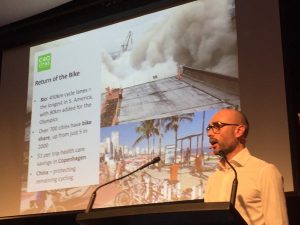 Auckland has become the newest member of C40, a network of the world’s megacities committed to addressing climate change. C40 supports cities to collaborate effectively, share knowledge and drive meaningful, measurable and sustainable action on climate change. Auckland will be working with more than 80 of the world’s greatest cities, representing more than 550 million people and one quarter of the global economy. Sharing research, experiences and ideas, C40 is helping to find and implement innovative solutions to urban climate issues such as transport, energy, buildings and waste.

At the Auckland Conversations on  15 March Mark Watts talked about the initiatives that cities around the globe are putting in place to reduce greenhouse gas emissions and climate risks.

Cities are central to delivering greenhouse gas emissions reduction targets (Auckland’s target is to reduce greenhouse gas emissions by 40% in 2040) through a focus on land use planning, transport and buildings. Every city needs to aim to get to 1.5 tons per person per year if we have any chance of avoiding dangerous levels of climate warming. Auckland is currently at about 7.2 tons (US cities are on 16.5 tpp).

The good news from Mark is that we know what we need to do create successful, prosperous, healthy cities. No city will be successful in the future unless it is low carbon. He made comments in relation to three key areas:

Sprawl is the enemy, density is the friend. 6% of growth in energy consumption is urban sprawl.  For example Copenhagen spends 4% of GDP on transport whereas Houston spends 16%.

‘Return of the bike the most important tool in urban transport’

There are now 700 cities with bike share. 40% cycle to work in one of the richest cities.

C40 consider that road pricing is inevitable in most big cities. In London as a result most people are not driving.  Stockholm has seen a 35% fall in emissions and 40% growth

Successful cities will run on data. Benchmarking is a catalyst to change. For example in NYC they are looking for a 30% GHG emissions reduction from buildings between 2005 and 2017.

Mark ended by asking what if Mayor’s ruled the world?  Political leadership is being shown by mayors from around the world.

The Waitematā Local Board received a special mention at the event for having a Low Carbon Community Action plan and a low carbon community network. 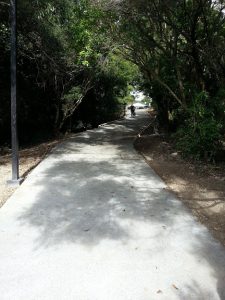 Local board members came together on 31 March to hear an update on the work that has been underway to progress Greenways across Auckland. Simon Randall, Chair, Maungakiekie- Tamaki Local Board is the local board representative on a Greenways Leadership group set up by Stephen Town CEO, Auckland Council. That group has been looking at how best to deliver a connected Auckland through active transport.

We heard about the work underway to create a Greenways identity, an overview of a Greenways Design Guide and the potential level of investment in Greenways.

It is great to see the enthusiasm for Greenways from Local Boards and the commitment to making Auckland the world’s best city for cycling where Greenways are embraced.

In Waitematā we have recently made progress on the Grey Lynn greenways route with the widening of the Hakanoa reserve pathway (photo right). The design of the on-road sections of the route is in the process of being finalised by Auckland Transport and will shortly be available for public input. 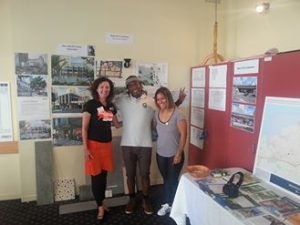 Neighbours Day in the City Centre

Member Deborah Yates and I, with officer support, organised a Waitematā Local Board display at the Neighbours Day event in Freyberg Square and Ellen Melville Hall as part of Neighbours Day Aotearoa.  The event was aimed at inner city residents and involved a wide range of community organisations. Thanks to Splice, ADCOSS, Heart of the City and everyone who made the celebration of the city centre happen. 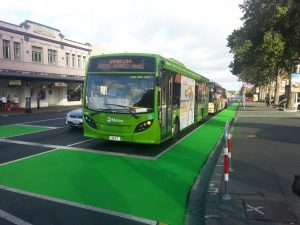 Fresh Kermit!  New feeder lanes and advance stop boxes on Ponsonby Road included as part of recent re-surfacing at the Board’s request are small but significant safety improvements for all road users.

Update on the Ponsonby Road pedestrian experience is reported on our agenda by Auckland Transport.

I attended the IPENZ transportation group conference 7-9 March with funding from the Board’s professional development budget.

The report back from the conference is attached to my monthly report (item 22).