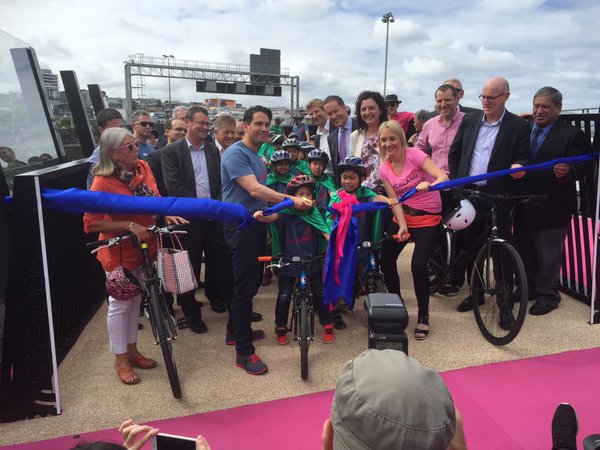 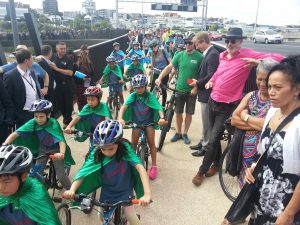 Auckland has a stunning new icon.

Te ara i whiti – Lightpath opened yesterday to rave reviews and a huge turn out of people excited to experience the world’s first ever pink (officially magenta) coloured cycleway created from a transformed disused motorway off-ramp.

The day started with a dawn blessing that allowed for a contemplative walk with iwi reprepresentatives along the route to admire the new art works and take in the newly created vistas of the city as the sun came up.

Hon Simon Bridges with the help of super hero riders from Freemans Bay primary school offically opened Phase One that includes a new swirling Canada Street Bridge connecting to the magenta-coloured Nelson Street off-ramp that joins the cycleway that runs down the length of Nelson St to the intersection of Victoria St. Phase 2, to start early next year, will take the entire Nelson St cycleway to Quay St.

In the evening thousands gathered on foot, on skateboards and on bikes to enjoy the “first hoon” and interactive light show that runs along one side.

It was a really happy day for Auckland and wonderful to take part in the celebrations for the magic that has been created in an incredibly short time.

Since the Nelson St off ramp closed in 2005 people have looked down on spaghetti junction and imagined what could be possible to break up the endless grey motorway that dissects the city.  The idea to re-purpose the off -ramp took shape in the City Centre Masterplan 2012 (CCMP). It was visualised as a NYC style Highline with an urban garden.  In 2013 Matter Architects installed hundreds of bikes as part of an award winning Designday installation which raised further questions about how the off-ramp could be used.

Janette Sadik-Khan inspirational Auckland Conversation presentation in May 2014 provided the platform for a challenge to city’s leaders to get behind a “quick win” transformational pilot project. 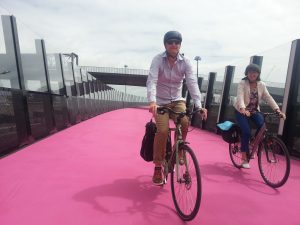 Barb Cuthbert and Max Robitzsch from Bike Auckland (then Cycle Action Auckland) were ready with just the right project – a concept for the off-ramp as a cycleway connected to K’rd (also supported and promoted by Transport Blog).  Fortunately the timing was perfect with a new Regional Director at NZTA willing to make the idea a reality and Auckland Transport agreeing to get on board to tackle Nelson St to provide a business case for the off-ramp as a key connection in the city’s cycling network.  The crucial funding arrived with the Government’s announcement of a $100m Urban Cycling Investment Fund in August 2014 followed by confirmation that

Nelson St would be included in the programme in January 2015 (I was a member of the Urban Cycling Investment panel that recommended the programme to the Minister). Political support came from the Mayor Len Brown, Councillor Chris Darby (the Council’s political urban design champion) and of course the Waitematā Local Board! (our small financial contribution was to fund a drinking station on route)

The final part fell into place with the decision of the City Centre Advisory Board to use the targeted rate paid by central businesses to fund the WOW factor for the project.  This gave Auckland Council’s urban design champion Ludo Campbell-Reid and the Auckland Design Office the opportunity to get creative and follow through on the potential identified in the CCMP to make sure Auckland ended up with something really unique.

Following public feedback the concept was created by Monk Mackenzie architects and LandLAB, in association with artist Katz Maihi. Māori patterns and narrative form a core part of the designs, following discussions with iwi. The path includes 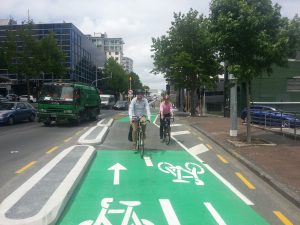 etched carvings at intervals along the length, with a 6-metre pou at the entrance. The colour (by Resin Surfaces Ltd) represents the heartwood of a freshly cut totara, with the red and pink shades strengthened to contrast with the surrounding motorway lanes.  It includes LED lights by Iion lighting lining the safety barriers, that can interact and pulse as people pass them, as well as a strong magenta surface colour that fades out at the northern end in a Māori design (details from the Auckland Council media release).

I’d like to acknowledge and thank all who played a part in the Lightpath & Nelson St cycleway project from Auckland Council, Auckland Transport, NZTA and the many contractors (including Hawkins Construction, GHD, Construction Landscapes, PFS) who worked hard up right to the opening day. Te ara i whiti is a fantastic example of what can be achieved when the stars align on a great idea and creative people are given the brief and funding to make it happen.

Film by iion of the first hoon

Time lapse of the paint going down https://youtu.be/tK_mZodXXCk

Pedal to the new metal – Catherine Smith in the NZ Herald