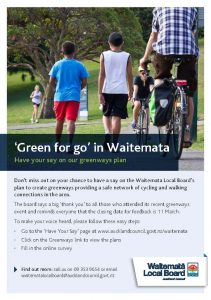 Greenways have the potential to transform the way we travel around our local area. The Waitemata Local Board’s Greenways proposal is to have a network of routes that connect parks and open spaces. As well as offering safe, high-quality routes, particularly getting to schools, greenways can also increase recreational opportunities and can deliver environmental benefits through expanding habitats for native fauna and wildlife.

Our Greenways event in Grey Lynn Park on 20 February really highlighted the demand of safe and connected routes for walking and cycling.

Consultation closes today . You can provide feedback by filling out a short online survey.

The monthly Transport catch up was held with the Transport portfolio and relevant officers from Auckland Transport on 16 August. We covered:

The issues discussed are reported back monthly by AT on our public agenda.

Auckland Transport has allocated around $3 million per year in the Regional Land Transport Programme to construct new footpaths. Local Boards have been invited to assist in establishing the new footpath programme by providing proposals to Auckland Transport.  The attached memo outlines the proposal for a footpath on Judges Bay Road extension that I have submitted on behalf of the Board.

A number of issues have been referred to Auckland Transport this month regarding footpath patching following the installation of ultra-fast broadband by Chorus, traffic concerns resulting from the opening of Farro Fresh on Westmorland Street in Grey Lynn and parking enforcement in parks.

I attended two excellent presentations during August on the subject of affordable housing.  George Housakos, CEO of Urban Communities Ltd, Victoria, Australia spoke at a lunchtime learning event about building mixed tenure communities.  He shared valuable experience about making the most of business streams that are the key to the success of a mixed tenure project. He highlighted that it makes good business sense to bring everyone to the table and to develop a management and delivery structure that involves the owners.

I also attended the launch of the Salvation Army Social Policy and Parliamentary Unit’s paper Adding it all up- Political Economy of Auckland’s Housing by Alan Johnson. Ian Shirley, Pro vice Chancellor of AUT introduced the author. The paper seeks to analyse the underlying institutional and philosophical reasons for the Auckland’s current housing shortage and makes specific points for action by Auckland Council to work towards building affordable housing.

I attended the breakfast seminar with Jim Diers, a community development practitioner from Seattle, who was jointly hosted by Auckland Council and Inspiring Communities. His focus is on building strong communities and neighbourhoods from the ground up. His presentation “Community Power unleashed” was inspiring and extremely relevant to Auckland and many of the initiatives we are supporting as a Board. Some of the points I took away:

I was really interested to learn about the Seattle neighbourhood matching funds scheme (currently $4.5m) that allows any group or individual to create one-off projects. This scheme has seen some fantastic projects get developed without creating dependency on Council.

Also relevant to our Board projects was his advice about how to encourage community driven planning where neighbourhood plans are locally initiated and developed. The Council provides funding and technical assistance but the community hires their own planners, defines the scope of work and drives the plan throughout the process. Jim Diers gave examples of this approach working successfully in Seattle where the implementation has happened and the resources of the Council and the community have multiplied as a result.

There were a number of workshops in August looking at the future direction of our libraries and the work being undertaken by the department to contribute to the vision of the Auckland Plan. At the workshop for all Boards on 29 August we had the opportunity to learn from and discuss with senior staff the long term direction for libraries, trends, focus for 2012/13, library facilities planning, programmes and events – regional/local, digital developments, library collections, local history heritage and archival collections. I am impressed that the Libraries team are really getting to grips with the challenges and opportunities arising from the move from the information age, with books as the central feature, to the knowledge society.  Allison Dobbie, Manager Libraries and Information, spoke about libraries moving to being high touch, high tech, high use, high engagement and making content (in whatever form) fully accessible . I think she is right that library space is as relevant as ever and can fulfil a role in the community that no other agency can.

A range of meetings and presentations were attended during August relevant to the Community portfolio – these are listed below including a presentation by students on their research project-  Women’s Safety: Myer’s Park and Newmarket Train Station Square and the Local Settlement Network meeting.

Work is now underway on the Board’s project to develop greenways and greenlinks throughout the Board to connect our open space and parks and to create safe options for walking and cycling and provide for ecological benefits. During August we had 3 workshops with members from Transport and Parks and Council officers who are working on developing a map of potential greenways. Workshops are continuing every fortnight.

I attended the Zone One meeting in Orewa on 24 August on behalf of the Board.  Presentations included:

I found this Zone meeting to be the most worthwhile of the three I have now attended as it directly addressed local board issues and allowed for meaningful discussion involving local board members.

The Grey Lynn Park Advisory group met for the first time under the new Council structure. Members of the group have been frustrated at the lack of action in the Park and brought their concerns to our Board meeting in July. A number of issues have now been progressed as a result of the meeting and we are looking to continue on a quarterly basis going forward. I assisted member Chalmers in writing a letter to neighbours of Grey Lynn Park regarding the proposed fruit tree planting to take place on 15 September.  25 letters were delivered by my partner Paul on a voluntary basis.

I attended the following events and functions during August: