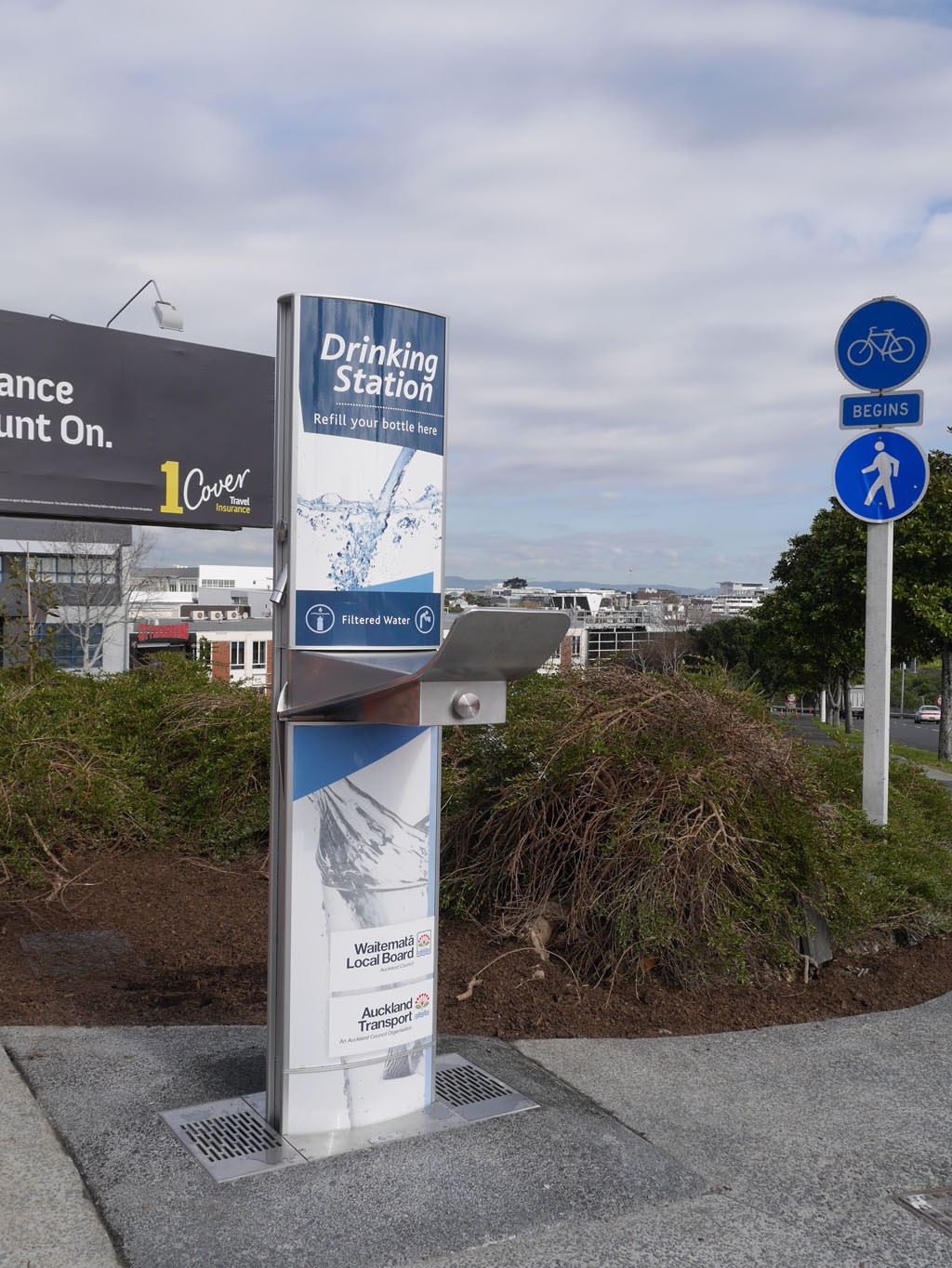 This report covers my Waitematā Local Board activities during August 2014 as Deputy Chair, lead for the Community and Transport portfolios, Chair of the Grants Committee, Deputy Chair of the Central Joint Funding Committee and with positions on the Ponsonby Business Association and Ponsonby Community Centre Committee.

The Cycle Advisory Group was established by the Mayor as a forum for providing advice, a strategic review and sounding board on cycling issues in Auckland. Members of the group consist of representatives from advocacy organisations, NZTA, ACC, MOT, Waterfront Auckland, AA, the Mayor’s office and Auckland Transport. Councillors Chris Darby, Linda Cooper and Penny Hulse are also invited to attend.

I attended the fourth meeting of the group on 29 August which focused on the prioritisation process for cycling capex projects.

I made a submission on the draft Government Policy Statement on Land Transport. At the time I was convinced it was a waste of time.

However on 19 August Prime Minister John Key  announced $100 million in new funding to be made available over the next four years to accelerate cycleways in urban centres after a record breaking number of submissions were received on the GPS supporting cycling investment. It is proposed that an Urban Cycleway Investment Panel will investigate opportunities to invest in urban cycleways that would expand and improve the cycling network. 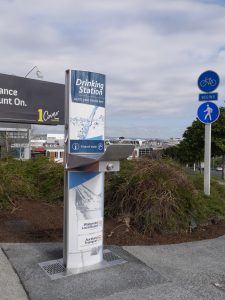 The board has committed to funding three drinking stations in the street environment from the local board capex fund.

A priority of the Board is to improve connectivity around the Waitematā area. One of our advocacy positions to Auckland Transport through our Local Board Agreement 14/15 is for construction of the Wellesley St connection to Auckland Domain under Symonds St overbridge and on-road connection to the NZTA funded/constructed Grafton Gully Cycleway

Last month I came across this Dutch family in the photo right who were lost on the Symonds Street bridge trying to get to the Museum by following a street map.  It reinforced yet again the importance of the City – Domain walking connection bvia Wellesley Street (the project is with the City Centre Integration Group to progress). 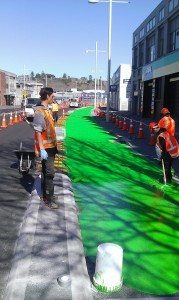 Thanks in part to Local Board advocacy great progress has been made to complete major cycling projects in the Waitematā area.  The Grafton Gully cycleway (NZTA project), Upper Queen Street bridge connection (AC project) and Beach Road stage one (Auckland Transport project – pictured) will all be opening in early September to provide a continuous connection from Quay Street through to the NW cycleway.

A monthly update with Auckland Transport took place on 27 August. Current issues are reported back monthly by Auckland Transport on our public agenda including the details of the consultation undertaken with the Transport portfolio on behalf of the Board.

The community Development portfolio is working on a number of issues that were discussed at our monthly meeting with CDAC officers on 27 August including:

I also attended a number of meetings during August relevant to the Community portfolio – these are listed below.

Consultation on the draft Waitematā Local Board plan ended on 6 August.  A series of drop-in sessions concluded at the Grey Lynn Library on 4 August. Consultation on the Board’s localised carbon emission reduction plan closed on 16 August.

The Community Grant committee met on 25 August to consider applications to the Board’s community fund for the first round of 2014/15. The Board has $100,000 available for community grants per year.

The Committee has recommended allocating $30,852 in grants from the $80,612 applied for. A final decision will be made at the September Board meeting.

The meeting received updates from Malcolm Alexander, CEO of LGNZ (Vision of LGNZ: Local Government powering community and national success) and presentations from Surf Live Saving, Fields of Remembrance Trust (WW1 commemorations) and an update on the Financial Prudence Regulations. 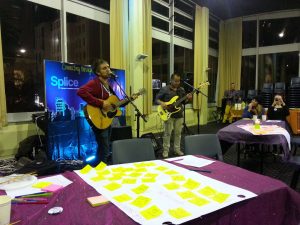 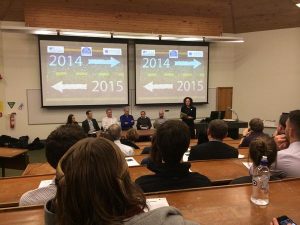 UPDATE: As I have acknowledged in my September monthly report when I made my submission on the draft Government Policy Statement on Land Transport  I was convinced it was a waste of time however I was proved wrong – on 19 August  the Prime Minister John Key  announced $100 million in new funding to be made available over the next four years to accelerate cycleways in urban centres after a record breaking number of submissions were received on the GPS supporting cycling investment. It is proposed that an Urban Cycleway Investment Panel will investigate opportunities to invest in urban cycleways that would expand and improve the cycling network.

I made a quick submission yesterday on the draft GPS on Land Transport with one minute to spare before the consultation closed.

I was hoping to present a fuller case for investing in walking and cycling but ran out of time.  Thankfully I was able to draw on the submission from the On Yer Bike campaign  which encouraged  a record breaking 3,400 responses.  Sadly I don’t think submissions on the GPS will make any difference to the government’s crazy obsession with building uneconomic roads & motorways at the expense of all other transport modes but I wanted to join those demanding investment in cycling.

I am Deputy Chair of the Waitematā Local Board representing the central suburbs and city centre of Auckland of almost 80,000 people.  The latest census has demonstrated the benefits of investment in public transport and walking/cycling in the Waitematā read. Where people are provided choice in Auckland they are leaving their car at home.

The draft GPS does not reflect Aucklander’s demand for transport choice.  The draft Government Policy Statement proposes to spend well under 1% of the budget on walking and cycling.

I therefore request that the government allocate significantly more funding to PT and walking and cycling in the 2015 Government Policy Statement on land transport.

In particular I request that the budget for active transport is increased from $15-30 million per year to $45-90 million per year for the next 3 years with progressive increases after that. This is a small increase relative to the total budget of $3.5 billion per year, but would start to make a real difference for cycling. The NZ Transport Agency should take an active leadership role in improving cycling.

Auckland Transport’s surveys have indicated that almost 60% of Aucklanders would cycle if they felt safe. Completion of the Auckland Cycle Network would give people a viable choice about cycling and provide more people with access to PT.

A strong and continuing focus on economic growth and productivity

Internationally competitive cities are now recognising is that a good walking and cycling environment is a pre-condition for an economically healthy city. It means higher rents, increases property values and creates economic benefits.

For example, after a parking-protected bike lane was installed on Manhattan’s Ninth Avenue, all traffic-related injuries dropped 50 percent. Injuries to pedestrians dropped 29 percent and injuries to cyclists dropped 57 percent

Investment in cycling infrastructure represents excellent value for money. In the UK the average BCR is estimated to be 19:1 (and this is without factoring in all the possible environmental benefits such as the reduction in air pollution and the health benefits)

By providing transport choice the road system is less congested and provides for the movement of freight and the people and services that need to be on the road.

The roading investment as proposed in the draft GPS is low value for money.

I ask the Minster to consider the data from New Zealand and internationally and transport trends to finalise a GPS that is economically responsible, environmentally sustainable and will meet the transport requirements of  Aucklanders now and for future generations.