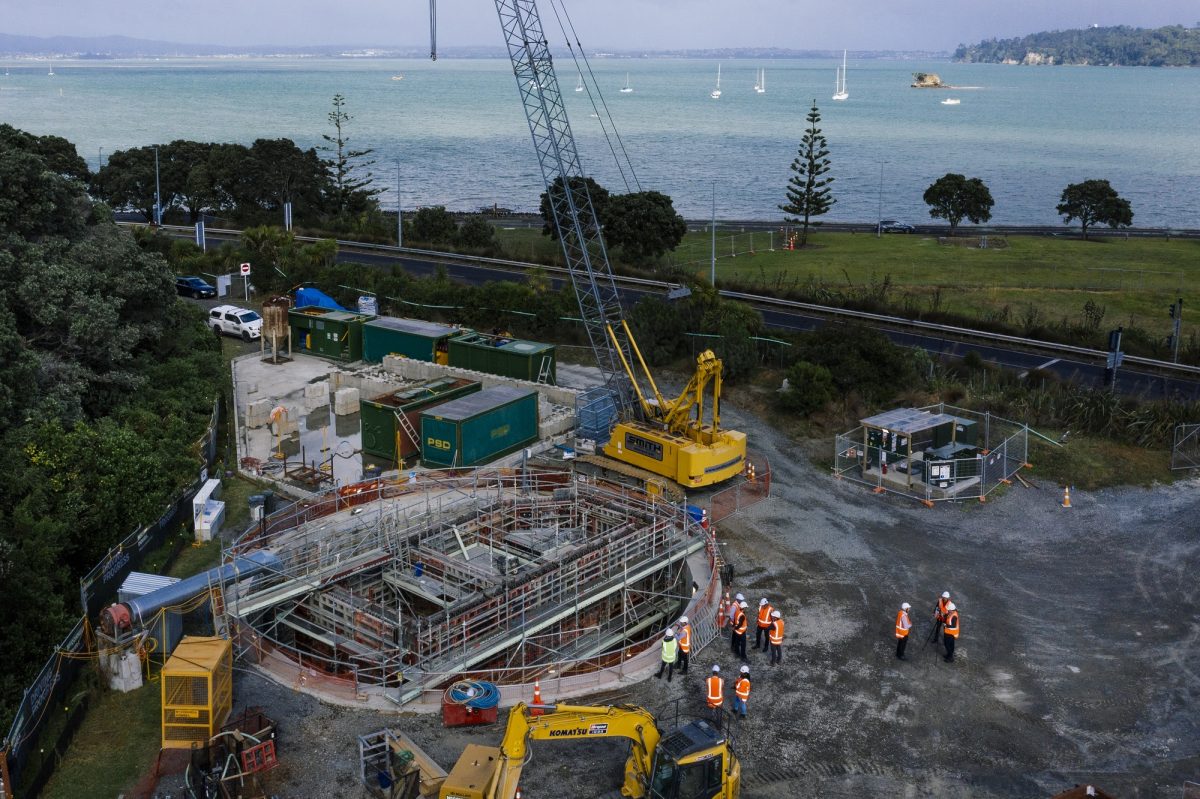 My Councillor report covers the period from 9 October to 5 November 2021.  It has been prepared for the November business meetings of the Waitematā, Waiheke and Aotea Great Barrier Local Boards.

On 14 October the Environment and Climate Change Committee

On 21 October the Extraordinary meeting of the Governing Body

On 21 October the Finance and Performance Committee

On 28 October the Governing Body

On 2 November the Appointments and Performance Review Committee

On 4 November the Planning Committee

Other meetings and key activities 9 October to 5 November 2021

The Tāmaki Makaurau Mana Whenua Forum and Auckland Council are partnering to give the Category B heritage shelter down on Quay St a new purpose through promoting te taiao (the natural environment) and providing environmental education focused on the navigation stories of mana whenua and their connections to Te Moananui o Toi, Tikapa Moana. (Our Auckland: Heritage Shelter repurposed to promote te taiao)

During the renovations of the shelter, the Hauraki Gulf Forum’s artwork, designed by Dave Gunson, was selected to wrap the building to attract Aucklanders’ attention to the project to come.

The wrap will be repurposed and used as promotional banners for rangatahi events. This work has been led by co-chair Nicola MacDonald in her capacity as the chair of Pou Te Taiao, the Environment sub-committee of the Tāmaki Makarau Mana Whenua Forum.

Our Auckland: Protecting the Hauraki Gulf 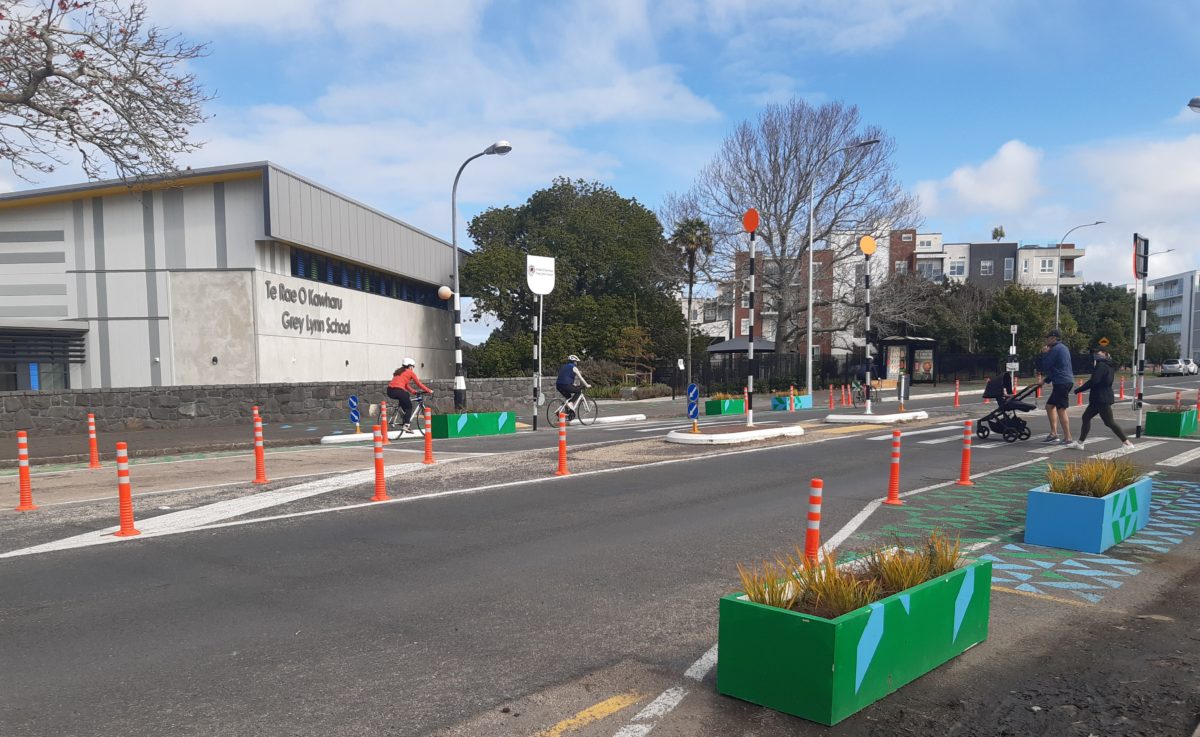 It was with a sudden jolt that we found ourselves back in lockdown Level 4 council systems were quickly re-activated to ensure essential services continued to operate and council facilities closed down safely. As with the first lockdown, council staff have been redeployed, such as the catering team now providing meals to the City Mission and environmental health officers who are supporting contact tracing efforts.

We are now all very familiar with the health guidelines: stay home except to access essential services, stay within your bubble, wash your hands frequently, wear a face mask, use your QR code if you go out, exercise locally, maintain physical distancing and if you are ill, self-isolate and get tested.

The central place for information is the government’s website covid19.govt.nz. A free Covid-19 helpline service is available for Auckland businesses on 0800 500 362.

Exploring locally for exercise and fresh air provides a welcome break from online meetings and bubble routines. Throughout lockdown, people will be experiencing their streets and neighbourhoods differently due to lower levels of traffic and safer neighbourhoods. It also gives a sense of the enormous change needed to our “normal” lives in order to cut transport emissions by 64 per cent from where we were in 2016 by 2030. Auckland, as New Zealand’s largest and fastest-growing city, must make a greater contribution to transport emissions reduction than other parts of the country to achieve New Zealand’s commitment to reaching net zero emissions by 2050.

Just prior to the lockdown Auckland Council established a Transport Emissions Reference Group to develop options to help achieve the bold emissions-reduction targets outlined in Te Tāruke-ā-Tāwhiri: Auckland’s Climate Plan. The scale of the challenge means a wide range of options and methods will need to be tested. Only radical change will reduce private vehicle demand and increase the uptake of active transport. 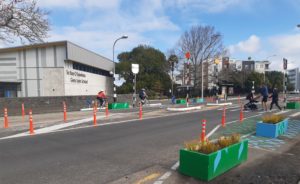 just as roads, but as public spaces. Councils only have to contribute 10 per cent of any project costs. The ability to pilot new street layouts through the programme enables communities to get a sense of what their streets could be like before a commitment is made to major investment; testing, monitoring, and engagement occurs throughout the trial.

Grey Lynn School is one of a number of schools across Tāmaki Makaurau taking part in Auckland Transport’s Safe School Speeds programme funded through ‘Innovating Streets for People’. The project involves schools working with Auckland Transport to introduce new speed calming measures such as kerb extensions, speed humps, and new painted surfaces to keep children safe. It is not surprising that Grey Lynn School was keen to sign up for the trial. Only recently there was a serious injury crash on Surrey Crescent, and the school reports a lot of near misses and concerns about vehicle speeds on the approach to the school crossings. Travelling at 30km/h or lower outside schools increases driver reaction and stopping time, reducing the chances of serious crash injuries.

The trial will now benefit everyone out walking and cycling during lockdown. Locking-in and expanding the best of all the innovation streets projects will be one of the many emissions reductions pathways to a decarbonised transport future. 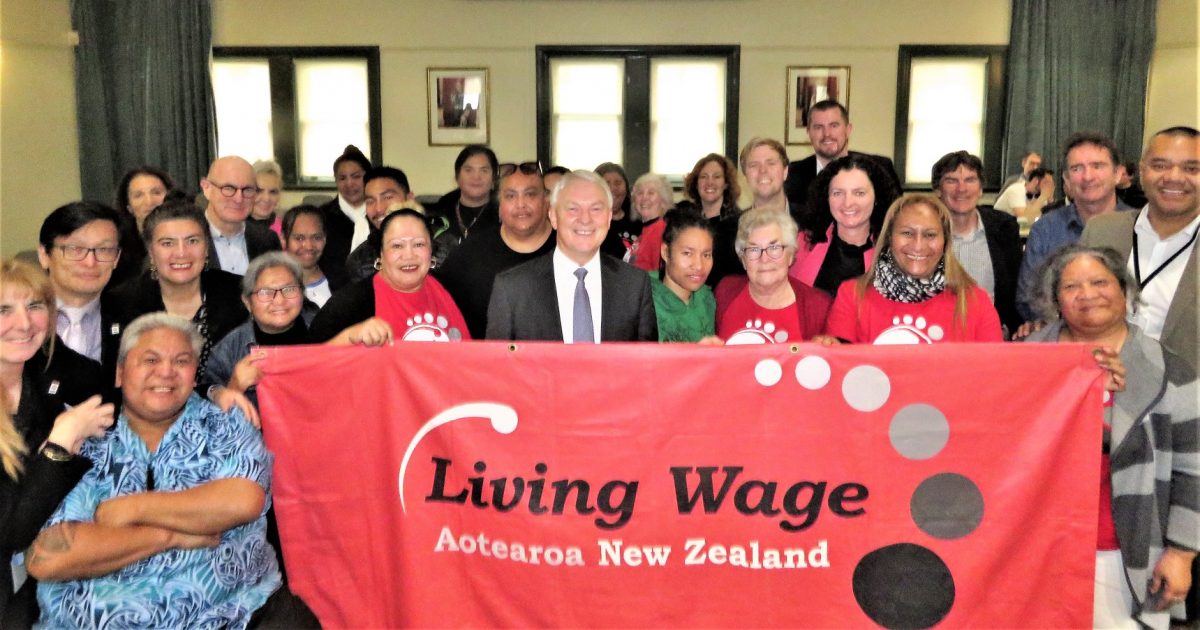 This is my Councillor report covering the period from 8 July 10 August.  It has been prepared for the August business meetings of the Aotea Great Barrier, Waiheke and Waitematā Board Local Boards.

On 16 July the Finance and Performance Committee agreed by 20 votes to 3 to recommend to the Governing Body that the Emergency Budget be based on a package of a general rate increase of 3.5%.

The committee also agreed to recommend that Governing Body adopted the Rates Remission and Postponement Policy.

The committee approved implementation of the Asset Recycling Budget and recommended that Governing Body approve disposal of the properties named in the budget.

On 21 July the Environment and Climate Change Committee voted unanimously to adopt Te Tāruke-ā-Tāwhiri: Auckland’s Climate Plan. The final plan will be launched digitally on council’s website later this year.

The committee approved a programme of work to develop a 100 year management policy to respond to the hazards caused by ‘too much water’ – specifically flooding, coastal inundation and coastal erosion.

The committee agreed to sign a Memorandum of Understanding with the Crown, Kaipara Uri entities and the Northland Regional Council to progress the proposed Kaipara Moana Remediation Programme, and establish a joint committee to provide stewardship and governance for the programme.

I read the feedback on the budget proposal carefully. A majority of submitters in my ward supported the package based on a 3.5% rates increase. Importantly the majority of organisations across Auckland supported the Mayor’s proposal – organisations representing union members, businesses, employers, faith, environment and arts groups. A lot of the feedback asked council to invest in jobs and communities to assist the recovery and rebuild rather than taking an austerity approach.

Once we had worked through all the financial information carefully – including the need to find an additional $224m to respond to the drought – every councillor supported the budget except one.

Auckland’s rates and annual increase continue to be comparably lower that other cities (eg Tauranga 4.7%, Hamilton 4.7%, Wellington 5.1% and Christchurch 3.5% 2020/21 increases).  It is important to note that Council is supporting financially distressed ratepayers with targeted assistance via the rates postponement scheme. 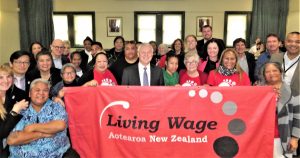 There is still a lot of pain in the budget and cuts to jobs, projects and services but retaining the commitment to extend the living wage to contracted cleaners is one of the positives the Mayor and councillors were able to celebrate with the Living Wage team straight after the budget was adopted on 30 July (photo right).

On 21 July the Environment & Climate Change Committee unanimously passed Te Tāruke-ā-Tāwhiri: Auckland’s Climate Plan. A plan to halve our emissions by 2030, to get to net zero by 2050, keep to 1.5 degrees of warming and to adapt our city to cope with the affects of climate change which we are seeing more intensely each year. The final plan will be launched digitally later this year. 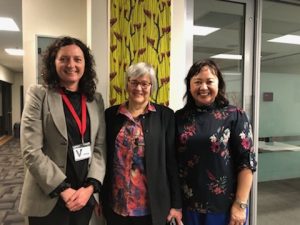 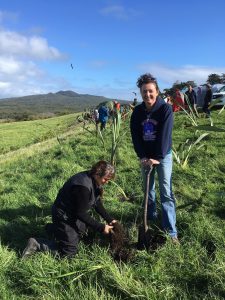 On 19 July I was hosted by Ngāi Tai ki Tāmaki at the inaugural launch of the Hukunui Pā restoration project on Te Motu Tapu a Taikehu (Motutapu Island). The project was launched with a special Matariki planting day as part of the One Billion Trees programme. The aim for the day was to plant 2500 trees of the 123,000 that will be planted over the next 3 year in a partnership between the Iwi and the Ministry for Primary Industries and with Te Papa Atawhai (Department of Conservation).

On 31 July, Hauraki Gulf Forum Co-Chair Nicola Macdonald, Executive Officer Alex Rogers and I spent the day visiting with Forum members in the Waikato – a great opportunity for regional collaboration as we work to heal the Gulf. We met with Mayor Sandra Goudie and Regional Councillor Denis Tegg in Thames; Councillor Donna Arnold in Te Aroha; Councillor Phillip Buckthought in Paeroa and Councillor Rob McGuire in Hamilton. 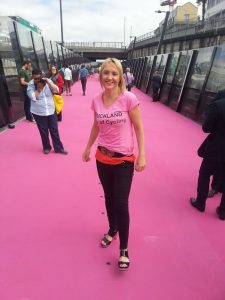 Many thanks to Nikki for all her hard work as MP for Auckland Central.  She can be really proud of everything she has achieved during her time in parliament.   We’ve enjoyed a positive working relationship and I have valued her advice and support in my role.  Nikki is tireless in following up on issues for constituents and fronting at meetings and events.   I wish Nikki all the best for her next adventure.

Our Auckland:  Building a resilient city