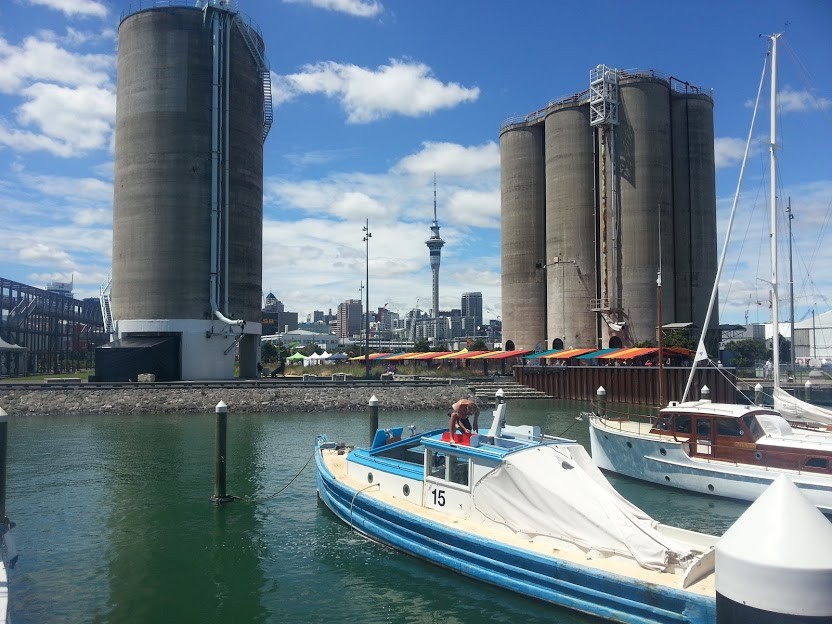 The opening of Lightpath and the Nelson St cycleway on 3 December by Hon Simon Bridges marked the beginning of a fantastic summer of cycling for Auckland.  There has been a 20 percent increase in cycling in December 2015 compared to 2014 thanks to the expanding network of safe cycleways. 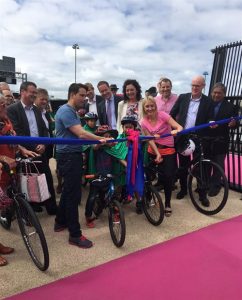 Lightpath is now the second busiest route with an average of 936 cycle trips per day (pedestrian numbers have yet to be made available but it is also proving to be extremely popular for walkers, runners and skateboarders).

Although Nelson St cycleway has been a big success (and Lightpath is guaranteed to be an award winner) we have been concerned about poor connections and lack of wayfinding to the route. At our December board meeting we passed the following resolutions detailed here.

As at 2 February NZTA has advised that the work around Mercury Lane and Canada Street is being reviewed as part of the final safety audit which is due to be concluded imminently with remediation work to follow.

I’ve signed up the Waitematā Local Board to the Auckland Bike Challenge through the Love to Ride website. Over February we are going to aim for every member of the local board and all our local board services team to give cycling a go at least once. 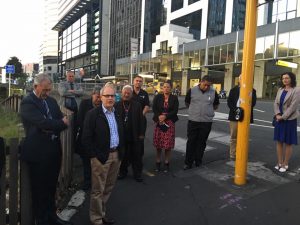 The Waitematā Local Board has consistently supported the City Rail Link as we understand that it is critical to the development of an integrated, efficient transport system in Auckland.  It was therefore a pleasure to mark two significant CRL milestones.

First on 21st December I attended with Christopher Dempsey on behalf of the Board the dawn blessing for the start of the CRL works (photo right).

On 27 January I joined MP Julie Anne Genter, supporters and board members for a celebration to mark the government’s announcement on 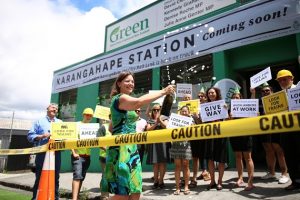 the CRL funding. This commitment is long overdue but it is good to see the government finally respond to the overwhelming evidence that the CRL is essential to Auckland.

Congratulations to everyone who championed the CRL project and in particular the Mayor who made it his number one priority.

In January I worked on the Board’s feedback on Auckland Transport’s proposed New Network for Auckland’s Central Suburbs following the public consultation process that ran from 1 October until 10 December 2015.

The Board’s feedback is attached to the agenda.

The Board welcomed the news that Auckland Transport proposes an early end to the Grafton bridge taxi trial. We originally opposed the introduction of the trial.

From AT’s monitoring data it appears that the introduction of taxis to the bridge had a more than minor effect as outlined in the pre-trial monitoring methodology.  The two main areas of concern are; failure to adhere to the 30km/h speed limit and, the number of recorded instances of taxis overtaking cyclists on the bridge.

We agreed with this assessment (which supported our own experience of taxis and unauthorised drivers using Grafton Bridge) and the recommendation to the Traffic Control Committee (TCC) for the trial to be stopped and for the special vehicle lane to be returned to a bus lane. 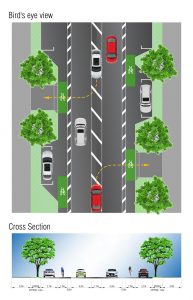 I am the Board’s representative on the Community Liaison Group for the upgrade of Franklin Road.

The key reasons given for selecting option 1 as preferred option are:

Option 1 will now progress to the detailed design stage with a draft design expected in March 2016. This will include further consideration of the treatment of the Wellington Street intersection and side road intersections, and the location and design of pedestrian crossing facilities.

Physical works on stage one are due to commence in March 2016 and implementation of the residents parking zone in April. It is great to see this project moving forward after a long campaign by the Board and local residents.

I have been following the Unitary Plan debate closely and how it impacts on our communities even though planning sits outside my portfolios.

On 25th January I attended with the Chair the Grey Lynn Residents Association information evening. At least 40 people came along to Grey Lynn RSC to hear about the latest zone changes.

What is of most of concern is the out of scope upzoning that is currently proposed by Auckland Council. This has involved unilateral changes to zoning without the ability of people to have any input. It is likely that not all the zoning changes will be opposed where it has been done to correct anomalies or where there may be support for more intensification particularly on transport routes (one of the rationales for the upzoning).

However current opposition to the proposals is not a NIMBY response (as is often portrayed of the oppostion) but an objection to the process. As the Shale Chambers said at the meeting it is a “procedural abomination” that the usual rules of natural justice and the democratic process have not been applied to the up-zoning proposals.

Another aspect of the Unitary Plan process that was mentioned at the meeting is how draining it has been on community groups. The Grey Lynn Residents Association is one of the few voluntary groups that are still managing to be part of the hearing process.

The Auckland Anniversary long weekend provided a smorgasbord of amazing events. I enjoyed checking out the Waitemata Local Board sponsored International buskers festival, Ports of Auckland hosted See Port, and the new Tamaki Herenga Waka Festival in the Cloud as well as taking visitors on a bike ride along the waterfront.

It was just really disappointing to hear that so many people were let down by public transport over the weekend. Member Christopher Dempsey is following this up with Auckland Transport as there is no excuse for not being able to plan for the huge crowds that are now attracted to the city centre to celebrate Auckland’s anniversary.

I was fortunate to attend a number of events in December in the lead up to the holiday break (including the Franklin Road lights, West Lynn Street party, Grey Lynn 2030 Christmas lunch, Ponsonby Business Association breakfast). I was particularly grateful for the invite extended to all elected representatives to attend a settlement waananga and Christmas lunch at Umupuia Marae on 11 December. It was a very special day learning about the history of Ngai Tai Ki Tamaki and their recent settlement with the Crown.