The monthly Transport catch up was held with the Transport portfolio (attended by myself and Member Dempsey) and relevant officers from Auckland Transport on 28 June. The issues discussed are reported back monthly by AT on our public agenda.  Specific issues include:

Due to the numerous safety concerns raised by residents, businesses and Richmond Road School we are advocating through our Local Board Agreement for Auckland Transport to develop a safety improvement action plan for the shopping areas and schools zones on Richmond Road, concentrating on the following elements:

I am currently in the process of pulling together all the issues that have come to our attention to form the basis of this plan.

We were briefed last month by Chorus on their rollout of ultra-fast broadband within the Waitemata Local Board area. The rollout will have many benefits to residents and businesses as average data speeds will increase from 10 Mbps to 100 Mbps. However the rollout does require footpaths to put be dug up, many of which have only just been renewed.

On 26 June I attended the Chorus “Shed some light” open evening for residents at Café O, Great North Road. A number of residents from Arch Hill came along who fought hard to have their footpaths renewed in time for the RWC but are about to see them dug up for the rollout.

I have also raised with Auckland Transport that Chorus is not reinstating footpaths to exactly the same condition following the laying of fibre which is resulting in a patchwork of footpaths.

Allocation of Auckland Transport capital budget to Local Board Priorities

I was delegated with Christopher Dempsey to provide the Board’s feedback on a discussion paper on the Allocation of an Auckland Transport $10m capital budget to fund Local Board priorities. We would like to see the budget used to fund small, one-off, single-site projects or initiatives that add value, enhance or unlock Auckland Transport directed projects that would not otherwise be funded  A copy of this feedback is attached to the agenda.

A Working Party is preparing Auckland Council’s submission on the Gambling (Harm Reduction) Amendment Bill (the Bill). At our business meeting on 12 June the Community Portfolio holders, were delegated to provide feedback on the Bill to the working party by 29 June 2012.

The amendments proposed in the Bill would significantly change the way Council interacts with the Class 4 gaming sector (non-casino “pokie” machines).

The feedback confirms the Board supports transferring to local authorities the ability to regulate gambling within their locality, including the number of machines and venues, and their type and location. However we raised a number of issues that we believe need to be addressed in the Bill particularly regarding distribution decisions. A full copy of the feedback is attached to the agenda.

The GLBA business meeting on 19 June included a presentation by local planner Kris Macpherson on the Council’s planning process. Members of the Western Bays Community Group joined the meeting to discuss ideas for developing a Grey Lynn precinct plan.

At our Board meeting on 19 June I voted with my City Vision colleagues to progress the proposed Westmere walkway on public reserve land.  I wish to report on my reasons and why I believe all the issues raised in opposition at the open day on 17 May and at our meeting and sent via email can be adequately addressed.

Lack of consultation – it is unfortunate that a group of residents didn’t receive notice of the open day until it was too late. This was a stuff up however the open day wasn’t the only opportunity for residents to provide feedback on the proposal. The idea of a walkway and opening up the public reserve land is also not new. I first heard about it in August 2010 at a Western Bays Community Board meeting. Consulation is continuing with residents.

Privacy – residents who have enjoyed exclusive use of the public reserve will now have to deal with a walkway bordering their property. Privacy can be achieved through fencing and planting. However I have noticed in other coastal areas where private homes boarder public reserve land that each property engages differently with a walkway. Many residents open their gardens on to the reserve and prefer to have no fencing.

Safety – there is no evidence that coastal walkways on public reserve land increase safety risks for nearby residents. If anything passive surveillance is likely to improve safety.

Traffic – if the walkway does attract more visitors they are likely to park close to the Garnet Road shops to do a circular walk ending with visit to a café (thereby supporting the local economy). Once the walkway is further extended with signage to Westhaven (by road through Herne Bay at high tide or along the coast at low tide) I predict that walkers are likely to get dropped off to enjoy a one- way coastal walk.

Cost – it does seem like a lot of money is being spent on one project. However compared with other capex projects I think we are getting good value money for a 1.4km walkway that will have long term benefits. It will be unfortunate if costs escalate due to affected neighbours taking their opposition to the environment court.

Loss of funding for other projects –Member Moyle claimed that he has been blocked from advancing other projects where the funds could be better spent. This is incorrect. Member Moyle has proposed just one new project in 18 months for a car park on reserve land at Coxs Bay. With the support of the Board plans were drawn up for this proposal and costed. The proposal is currently with Auckland Transport. There are no projects identified in the local board plan that are going unfunded as a result of the walkway.

Loss of neighbourhood character – the walkway is likely to add to the character of the neighbourhood and become a key feature for the benefit of locals. The walkway also provides an opportunity to celebrate the heritage of the area which has long been neglected.

Environmental damage – at the open day I heard about middens along the route and the many ecological values of the area. I also heard that there is continuing concern about the pollution in Motions Creek. I think the walkway is an opportunity to enhance and project the environment. Historic features can be incorporated into the interpretation boards for the walkway.

At the end of the day the walkway is on public reserve land that belongs to everyone. For over 80 years the residents with coastal properties have enjoyed almost exclusive use and have come to see the coastal reserve as an extension of their backyards. I can therefore fully understand why the walkway is seen as a threat to their lifestyle and there are concerns.  However I believe these can be addressed by the Board and Council officers working with the residents. I think the walkway is going to be used primarily by locals who I hope will come to feel proud of it as a lasting legacy.

I attended the following events and functions during May: 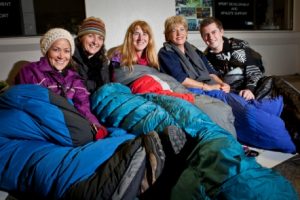 I also participated in The Big Sleepout on 28 June with 60 celebrities, business leaders and politicians personally raising over $1500 for Lifewise’s support of homelessness.