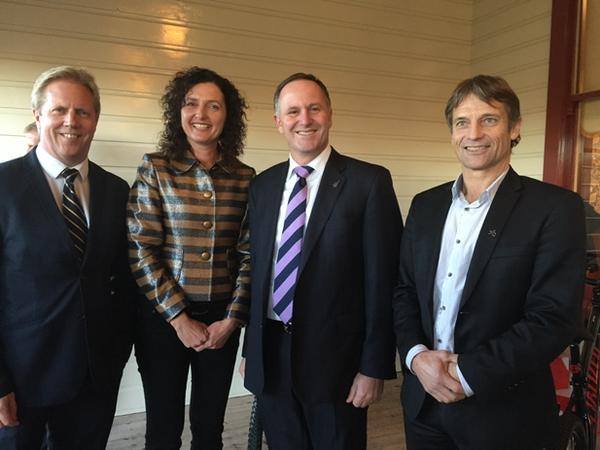 When I first became involved in cycle advocacy through Cycle Action in 2008 it was a struggle convincing politicians about the benefits of cycling. It was very common to hear arguments along the lines of “what is the point of spending money on cycling when people don’t and won’t cycle because it is too hilly and rains too much.”

The debate started to slowly move from “why” to “when and how” by the time the super city was established in 2010 and Len Brown was elected on a commitment to cycling.

The “how” got a major boost in August 2014 with the unexpected  announcement of a $100m Urban Cycling Investment Fund by the Prime Minister.  Councils across the country were given a massive incentive to dust off their cycling plans to take advantage of the funding to accelerate urban cycling projects.

All credit to the Prime Minister for leading this initiative. It is a smart move that he knows, from his experience of investing in NZ cycle trails, has the potential to yield impressive results.

It was great to be at the launch (as a member of the panel that recommended the programme to the Minister) on 25 June 2015 when the Prime Minister and Minister of Transport jointly announced the full 2015-18 Urban Cycleways Programme  at an event in Rotorua.

It is going to be exciting to see projects progress, cycling networks take shape and more people encouraged to take up cycling in a safe environment.

Transport Minister Simon Bridges has today announced a $333 million cycleways investment that he says will change the face of cycling in New Zealand.

The Minister has announced that, on top of the 13 cycleways projects announced in January, a further 41 will receive funding under the Urban Cycleways Programme.

“This is the single biggest investment in cycling in New Zealand’s history,” he says.

The programme is designed to pull together a range of funding sources to build the best possible cycling network that benefits all New Zealanders.

“The Government’s $100 million Urban Cycleways Fund has helped generate an overall investment of $333 million in cycling, getting world-class projects underway much sooner than may otherwise have been the case.”

Together with those announced in January, these projects will make cycling a safer, more attractive transport choice for thousands of people around the country.

“The projects announced today will draw on the $90 million remaining in the Urban Cycleways Fund, as well as $107 million from the National Land Transport Fund, and $99 million from local government,” Mr Bridges says.

The Urban Cycleways Investment Panel assessed and recommended the projects to receive the funding.

Projects to be accelerated