Each panel member was invited to speak for 5 minutes before a panel discussion with the Associate Minster Julie Anne Genter. The following is my presentation

Greetings Minister.  Greetings to everyone gathered at this significant summit

Thank you for the invite to be part of the panel discussion and the opportunity to present on the road safety crisis facing Auckland. 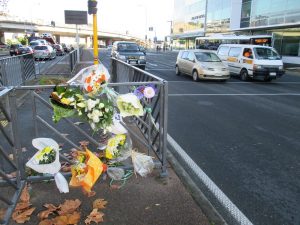 It is currently a very bleak picture but at the same time I have tremendous hope for the future of our transport system thanks to the leadership of the new government and in particular Ministers Genter and Twyford. Significantly for the first time ever Auckland and Wellington are aligned politically to drive through progressive reform to deliver safe, sustainable, accessible mobility for everyone.

Just to mention that my slides are on autopilot for 5 minutes and will just keep rolling as I speak pecha kucha style. Auckland Transport has provided the graphs (below).  I acknowledge the work of the many road safety professionals here today. 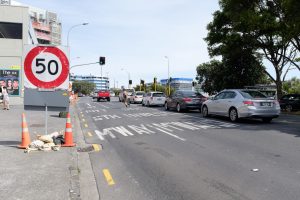 I speak not as an expert but as a politician who wants to do what is necessary to ensure that the people who live, work, play, study in and visit Tamaki makaurau are able to enjoy a transport system that is free of serious injuries and death.

People like Robert Su who was killed while heading home to his family on the north shore from work in the growing Waterfront business area. The road that he and hundreds of commuters have to cross to reach their bus stop is designed for high speeds and vehicle priority.   This is the story all over Auckland where street design, road safety culture, speeds, investment, enforcement and education has not responded to Auckland’s growth and change.

To give a snap shot of that change in stats. Auckland welcomed 50,000 new residents over the last year.  More workers enter the city centre each day on PT than in private motorcars. There are more people living in the city centre than come in by car. Pedestrian numbers on Auckland’s premier shopping street have doubled since 2012.  800 cars are added to Auckland every week. 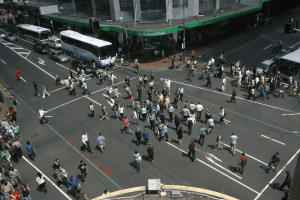 Tragically in the past three years, Auckland deaths and serious injuries have increased at almost triple the rate of the rest of NZ and around five times the growth of travel.

A recent, highly critical, road safety report commissioned by Auckland Transport’s Board concluded the reasons for the increase in deaths and serious injuries include 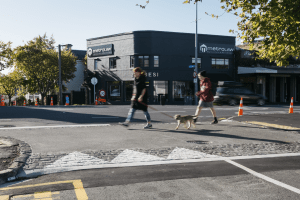 At the same time there has been a complete lack of leadership and a failure to prioritise road safety.

Fortunately, and none too soon, change is coming and we know what to do.

Auckland is close to adopting Vision Zero to demand and inspire action.   I acknowledge Chris Darby, Chair of the planning committee and North Shore ward councillor.  Chris has led the way on the Auckland Plan the long term vision for Auckland that will include for the first time a focus on moving to a safe transport network free from death and serious injury.

I appreciate to achieve that are no simple solutions and that transportation is a complex system with multiple factors but I am encouraged from what I am hearing across the sector that there is a united view on the way forward.   I’ve recently joined the Executive committee of Trafinz. Acknowledge to the committee members here.  Trafinz has developed 15 interventions to reduce death and serious injury for local authorities to adopt that are aligned with what the Minister has indicated for the new road safety strategy including vision zero. 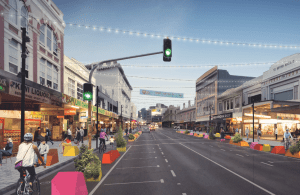 What I also appreciate as a politician is that we have to bring the community along to support a significant step change. The Minister has given local government the challenge to not allow opposition to specific treatments to slow down delivery. This is not going to be easy as the public has been lied to for far too long about why the system is failing. Victim blaming is deeply engrained as way of explaining the carnage and too many politicians are ready to dog whistle on slower speeds.

But we can be brave to reject business as usual thanks to what is happening at the grassroots, the advocates who are the wind in our sails of change.  Thanks to the work of Brake and partners there is a groundswell of support for Vision zero and safer speeds.  The petition organised by Cycle Action Network of over 11, 000 calling to make our streets safe for cycling is an indication depth of support for a new approach .

On the ground in Auckland, feedback through the recent 10 year budget consultation shows strong community support for transport choice, complete streets, slower speeds, safe mobility for our most vulnerable.

Kia ora Minister. Thank you for making this summit happen to provide the leadership needed to address NZ’s road safety crisis. The time is now.