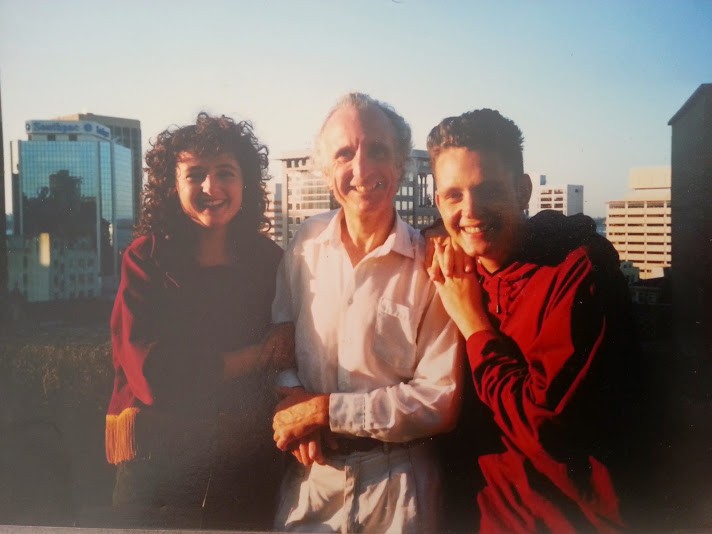 Just over twenty years ago my generous, fun loving, warm hearted dad was making plans for an overseas trip. He regularly visited the UK (where his parents lived) but this time he was especially excited about including lots of dancing into his travels leading up to the Rio Carnival. My dad loved to dance Latin American style and was a regular at the old El Inca club on K’rd.

Before he left for the UK he set out on a roadie to visit me in Wellington where I lived at the time. He never made it. At Sanson on SH1 he missed the turn off to Wellington and a few minutes later along SH3 he was killed instantly in a head on crash.

Many years later and now with a role on the Waitematā Local Board advocating for road safety, I’ve come to think of the crash not just as a personal family tragedy but also how it provides an understanding of the “safe systems” approach to creating a forgiving roading network.

Every part of the system failed my dad.

The Road: The signage on SH1 used to be terrible. It was easy to miss the turnoff at Sanson like my dad did. Shortly after the crash Transit upgraded the signage.

The crash occurred where an overtaking lane abruptly ends at the brow of a hill.

Road Use:  The driver of the on- coming car pleaded not guilty (I think the charge was careless driving). He couldn’t remember the crash and could not believe that he had caused it. He thought of himself as a safe driver who was very familiar with the stretch of road.

The Vehicle: My dad loved old cars (unlike his dad who after a working life in the Vauxhall factory in Luton was able to upgrade his car every year). The car he was driving (I think a Rover) didn’t have any driver safety features like air bags.

Speed: The other driver made a mistake misjudging a simple over taking move in a passing lane. Unfortunately his speed gave him no time to react when he found himself on the wrong side of the road.

Even the best drivers make mistakes. What we don’t have to accept is that fatalities and serious injuries are just an inevitable consequence of driver mistakes. A safe system approach means that we can demand a lower road toll and even zero road deaths (“Vision Zero“)  but we all have to play our part.  We need improved road design, safer vehicles, competent road users and safe speeds.

The NZ Police are currently under pressure to get their messaging right about their approach to enforcing the speed limit and need to explain why the road toll has increased during the holiday period (when the trend is downwards). However I absolutely back the Police taking a hard line on speed enforcement (with the posted limit recognised as the limit without fiddling with “tolerances” rounds the edges) . It is a lazy political response to claim  (as Ron Marks MP has done) that speed management is about revenue gathering. It is based on international evidence that reducing speeds reduces the number and severity of crashes.

If anything I would like to see the Police put even more resources into enforcing urban speed limits.  The Waitematā Local Board is advocating for slower speeds in residential areas (starting with a trial) and supports the City Centre Masterplan objective of a central slow speed zone.  Reducing speeds will contribute to liveability and encourage more people to walk and cycle.  And of course easing back on the gas will save lives.

Edinburgh to roll out 20mph speed limit across city

The Safe System approach aims to create a forgiving road system based on these four principles:

People make mistakes and some crashes are inevitable.

Our bodies have a limited ability to withstand crash forces without being seriously injured or killed.

System designers and people who use the roads must all share responsibility for creating a road system where crash forces do not result in death or serious injury.

We need to improve the safety of all parts of the system – roads and roadsides, speeds, vehicles, and road use so that if one part fails, other parts will still protect the people involved.