It is a great honour to represent the Waitematā Local Board and to have the opportunity to speak in front of such a distinguished gathering at a truly momentous occasion for Auckland.  The opening of Parnell station is a significant milestone in the ongoing renaissance of Auckland’s rapid transit network.

I’m also fortunate to be speaking last  – not because I put value in getting the last word but because although there have been many thank yous and tributes there are still important acknowledgements to be made from the Board’s perspective. 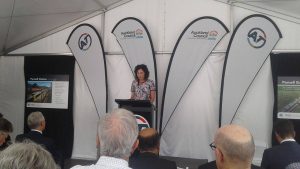 I would first like to acknowledge this place. Parnell station is located in the historic Waipapa valley , a site of significance to mana whenua back into time and the early settlers of Auckland who coveted the strategic location and pure waters of Waipapa Stream.

The fact the station is located in the Waipapa valley is thanks in large part to many people gathered here today who fought for the valley’s heritiage to be recognised,  the day lighting of the Waipapa stream, regeneration of the stream banks and to maintain public access to Parnell and the Domain. There is no time to traverse the history now but the Board is looking forward to documenting it with the community and finding ways we can include story telling in the valley and at the station. 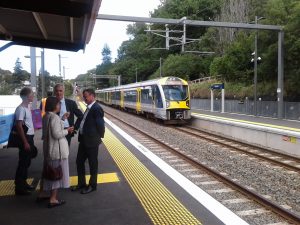 I know there is a long roll call of people who played a role – let me acknowledge former Auckland City Councillors Richard Simpson (attending today all the way from Brisbane), Christine Caughey (well ahead of their colleagues at the time in valuing public transport over motorway building madness);  members of Parnell Heritage, Parnell Community Committee Luke Niue, Jennie Goulding, Mary Barry,  Rendell Macintosh, Roger Cole-Bake; Debbie Harkness former Parnell Mainstreet Manager was a strong supporter back in 2008, and more recently Cheryl Adamson and the Parnell Business association all who have helped keep the focus on Parnell as a destination.

Before I turn to the man who deserves recognition as the driving force behind Parnell Station. I’d like to acknowledge those who did the work behind the scenes and deserve to feel very proud today in particular Nick Seymour, who worked on the project for AT from 2008 until September 2016. The early work led by Nick and his team involved preparing the construction of new platforms and station building. That early enabling work involved a monumental earth moving effort without which the station would not likely have been built.

Giving wind to the workers and politicians I acknowledge all the public transport advocates who campaigned for a rail station over the years.

The Waitematā Local Board has supported the Parnell Station project since day one. This is of course down to Councillor Mike Lee.  There has rarely been a local board meeting since 2010 at which Mike hasn’t updated the board on the progress of the Station.  He has fought long and hard for a station in this location starting back in 2007.  As Chairman of the ARC he was also instrumental in saving the critical element of the heritage station.

Thank you Councillor Mike Lee.  A proud day for many people here but particularly you Mike.

Finally, I would like to acknowledge my fellow board members – Shale, Richard, Adriana, Vernon, here today  who led by Shale last term supported the Board funding, from our transport capex fund, the path connection from the platform through the Domain to Carlaw Park.   Thank goodness we do have some skin in the game to justify a spot on the run sheet with the opportunity to give our acknowledgments today!

We look forward to the restoration of the station building; realizing the benefits for Parnell and the expansion of services as the station comes into its own– which is certainly guaranteed once 600 apartments are built right here for gold card users and the connections to the university and Domain are complete.  Thanks to all those who had the vision to see the project through in this location.

Next we’re determined to open up the old Parnell rail tunnel (in better condition than the new tunnel I might add)  to create a unique greenway walking and cycling path from the Strand to Newmarket via Parnell Station. A project we think is worthy of government funding.

Parnell Station is open, Our Auckland