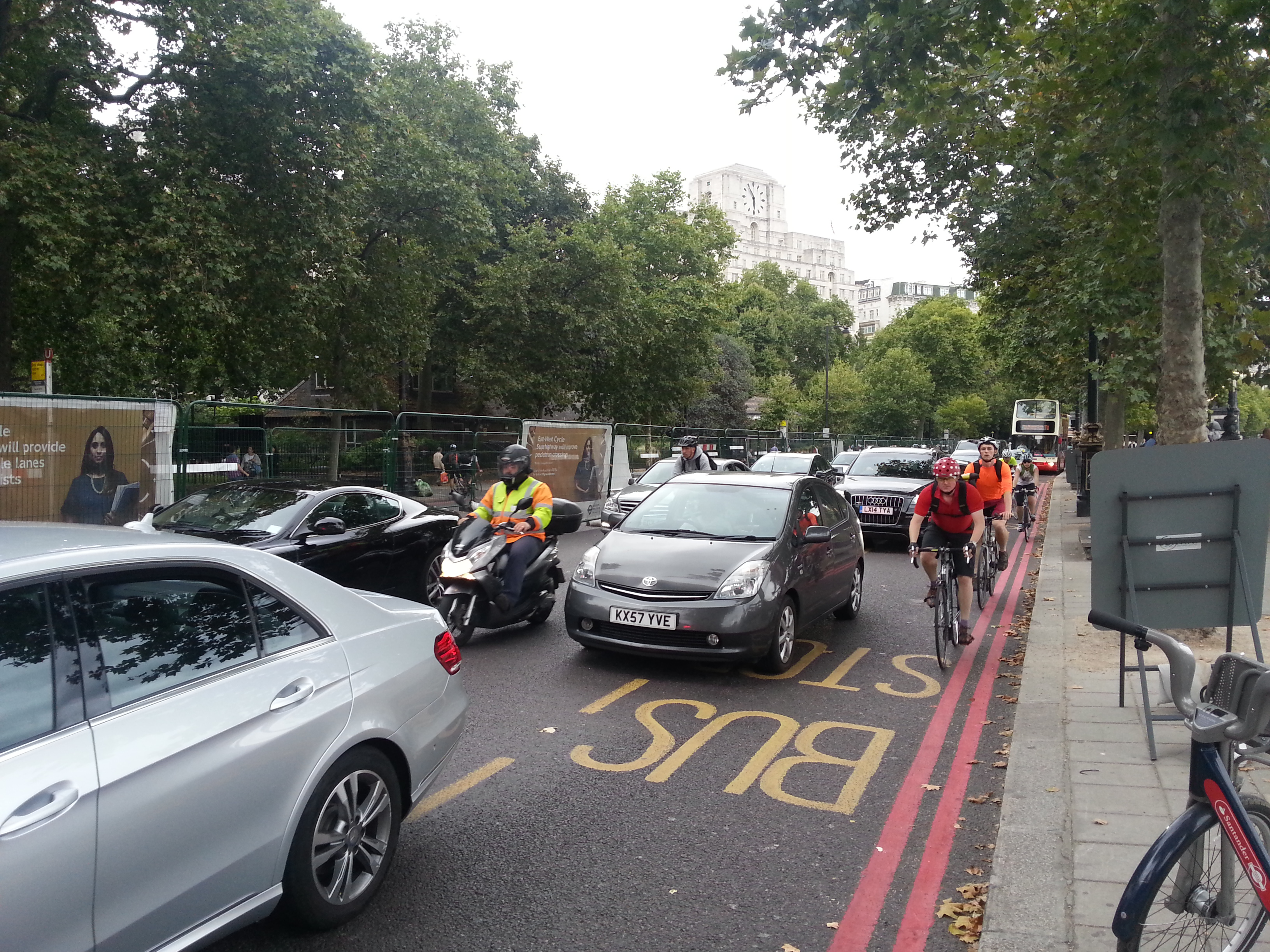 I recently accompanied my mum to London to support her competing in the 10th World Brompton Championship race. I hadn’t been back in 5 years so I was also looking forward to checking out the explosion of cycling I’d been hearing about. From dispatches I was expecting London to have been transformed into a Copenhagen of the British Isles. The increase in bikes everywhere was really noticeable but I was also surprised to discover this is despite many central London streets still being very congested and hostile to riding.

Even as a confident rider the few times I ventured out on a public hire “Boris” bike in central London I found to be a scary experience.  The super cycle highways currently under construction are going to make a huge difference however many historic London roads are narrow and cyclelanes are unlikely to be an option.  I understand this has led to a multi -pronged approach to encourage cycling by calming streets, slowing traffic, safety campaigns and the creation of routes through quieter areas.

It confirmed for me that if London can grow cycling numbers spectacularly with huge transport challenges in a city of 8.6 million people then in Auckland we really have no excuse.  I’ve heard too many times that we don’t have space for cyclelanes and that there are too many barriers to cycling (weather, hills, dangerous roads). . We only have to look at London to know most of our arterials are more than wide enough to comfortably accommodate everyone including people on bikes –  we just have to refocus our priorities.

But the real surprise for me on my trip was getting to take part in the Prudential Ride London Freecycle event. A day of cycling traffic- free around 10 miles of London’s most ironic streetscapes. On a glorious summer’s day we joined the estimated 70,000 of people (including many very small children) on bikes taking advantage of an “open” streets circuit and festival zones along the way.

Of course it made me wonder when we are going to have Auckland’s first genuine “freecycle” event with the roads made available just for cycling. We’ve had Playing in the Streets in 2012, Ciclovia in 2014 and Open Streets Auckland earlier this year which were lots of fun and opened streets for people to enjoy but just didn’t cater for riding on mass, on a dedicated route (there are lots of other successful examples from around the world like NYC’s Tour de Brooklyn).

The idea of an event taking advantage of a car free circuit has been floating around for a while but may now be gaining momentum with the injection of Urban Cycling Programme Funding starting to have an impact. Finally in Auckland with the opening of Grafton Gully and Beach Rd cycleways, Nelson St about to open and Quay St promised by April 2016 we can see a real network taking shape. We will soon be able to “circle the city” by bike.  A freecycle type event will provide the opportunity to showcase progress in the city centre, give Aucklanders a chance to reclaim their streets and hopefully introduce many new people to cycling.

Urban Planner Lennart Nout has designed a map of a possible circuit. Riders would be able to start at any point and other that the loop in the Domain cycle in either direction on the course. Festival zones could be included in places like Silo Park, Teal Park, and at the Domain.

As the traffic management for the event is likely to be very expensive it would make sense to give a major sponsor naming rights (in London the sponsor called the event “Freecycle” to fit with their brand but I don’t think this works as a name in Auckland).

The Waitemata Local Board and Auckland Museum have provided support in principle for an “open” streets mass ride event. Auckland Transport’s walking and cycling team is wondering if the time is right and whether people will show up.

I am sure that if we make it happen then the riders – especially novices, children, families –  will come!