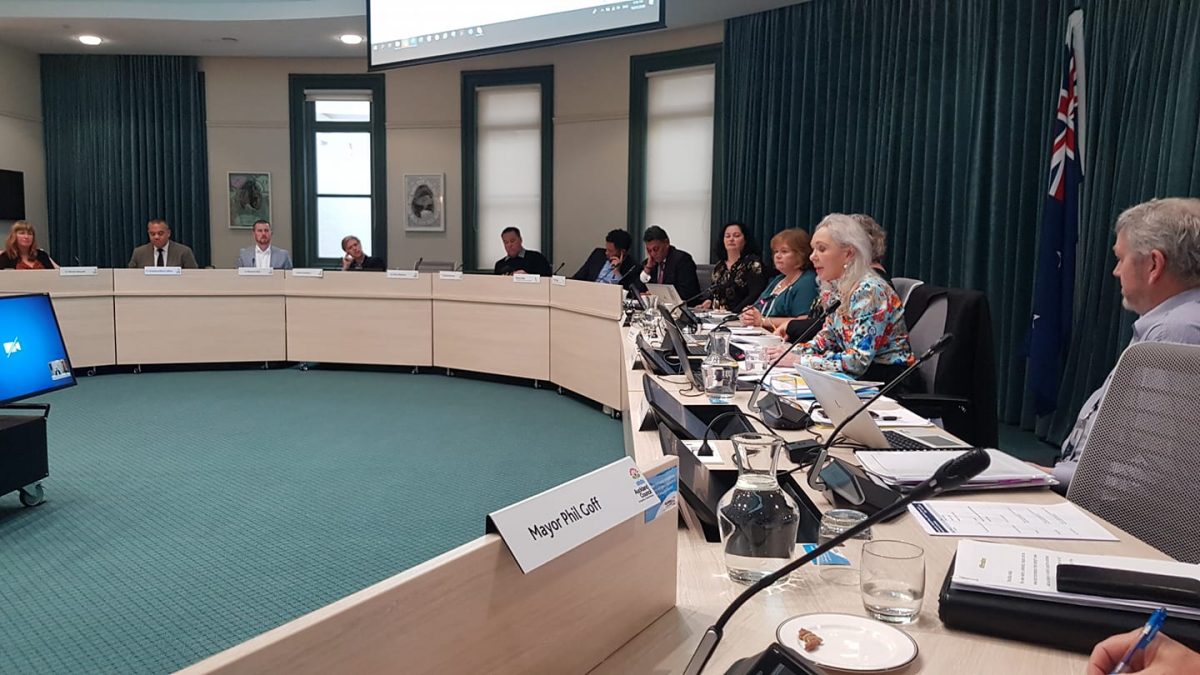 On 16 July Auckland Council’s Governing Body voted 18 votes to 3 to adopt the Mayoral Proposal for the Emergency Budget 20/21  based on a 3.5 % rates rise (after it had been recommended from the Finance and Performance Committee chaired by Cr Desley Simpson).

The full resolution is as follows:

That the Governing Body:

a)      receive the Emergency Budget Mayoral Proposal in Attachment A of this report.

ii)      an increase to the Uniform Annual General Charge of 3.5 per cent

v)   final budgets for 2020/2021 as set out in the staff report under the 3.5 per cent rates increase option, modified as follows:

A)including additional budgets for Watercare in 2020/2021 of $224 million capital expenditure and $15 million of operating expenditure to respond to Auckland’s drought situation, noting that Watercare will mitigate $121 million of the impact that this will have on group debt

C)including an additional group-level budget provision of $98 million of additional transport and three waters capital expenditure in 2020/2021 that is assumed to be fully funded by central government, subject to further information about the projects being received

J)including the reinstatement of $450,000 funding to ensure library hours are not reduced

d)acknowledge the record breaking 34,915 pieces of feedback received from the public during the consultation process in May and June 2020.

e)acknowledge and thank Local Boards, Council Controlled Organisations and the Independent Māori Statutory Board for their collaboration and input into the Emergency Budget.

f)note the Emergency Budget includes over $200 million of savings and cost reductions for the council group; which includes a reduction to staff numbers.

g)note that the introduction of the ‘Postponement of Rates for Ratepayers Impacted by COVID-19 Scheme’ will offer support to ratepayers who are financially affected by COVID-19.

h)note that the Auckland Council group will continue to deliver a capital investment programme of over $2.5 billion in FY2020/2021 which will contribute to Auckland’s recovery from the impacts of the COVID-19 global pandemic

Notes for my speech to the Finance and Performance Committee meeting in support of the 3.5% budget package

In speaking in support of the 3.5% package and the resolutions before us I would like to start by acknowledging how we find ourselves with a massive hole in council’s revenue  (Note * $475m plus $224m for water infrastructure to respond to the drought) and considering for the first time ever an emergency budget.  As of yesterday there were over 13.5 million infections of coronavirus and almost 600,000 deaths.  The stats will include my mum’s older sister who died overnight in South Africa of the virus. The pandemic is raging outside our boarders.   It is a situation none of us could have imagined when we started this fresh term back in November and the biggest crisis at the time was the Sky City fire!

Fortunately in Aotearoa, thanks to impressive leadership, informed by science, and a team of 5 million coming together we are in the strongest possible situation.

The phenomenal lockdown response highlighted the best of council and the value of the services and facilities we provide.  We’ve seen food packages distributed, the vulnerable housed, vital supply lines maintained to the Gulf islands, 15,000 calls made to seniors at home by re-deployed library staff, and essential workers provided with transport (further details here of council’s covid-19 response) .  This work continues, for example, at the central library there is now a health service available to rough sleeps who find the library a place of manakitanga . This is only possible through valuable partnerships that have grown stronger through the crisis with Marae, community groups, and NGOs such as the City Mission and Lifewise.

The valued role of council has come through in the submissions on the budget (consultation summary here). There is concern about the impact of cuts on Auckland’s ability to recover at a time when we need investment, jobs and to build community resilience.  The feedback we have heard is very much framed I think along two alternative options in responding to the crisis – an austerity approach or an investment budget .

I can totally understand the wish to see rates cut. There a strong sense of anxiety, of difficult personal circumstances and the hit to household incomes as a result of covid-19.    There are historic inequalities and iwi grievances that this budget doesn’t address.

It is also very difficult to explain why, at a time of economic uncertainty and potentially a serious recession looming,  council needs to put up rates when everyone else is belt tightening.  However, the part of the story that doesn’t hit the headlines is that we are playing catch up on infrastructure investment that didn’t happen to match Auckland’s growth due to historically artificially low rates – especially in the old Auckland City Council area – for example we can’t ignore that the reason there is poo in the harbour is due to chronic under investment because of a failure to plan for the future by previous councils.

I’ve read and heard a lot of anger directed at council.  There is lack of trust that we need to address and a perception that the super city has failed.  I’m sorry for the staff who had to read the vitriol in some of the submissions in part whipped up by a dishonest campaign based on misinformation.   The campaign has actually been counter productive because it hasn’t led to constructive feedback.  There are lots of references supporting cuts to “Vanity” projects, “pet” projects, and getting back to “core” business but without providing details of what is non-essential. The “town hall” rich list campaign based on inaccurate information distorted the debate on the budget.

[Note*: Commentary about overpaid staff isn’t accurate. With an asset base of over $50 billion, Auckland Council is a very large organisation second only to Fonterra on a national scale. Less than 1% of staff earn over $200k.  Comparisons made between the council and the private sector are not always relevant, but it is worth noting that senior staff who have come from executive roles in the private sector have taken significant reductions in salary to work at the council. The mayor and deputy mayor have taken a voluntary 20% salary cut, and councillors have taken a 10% cut. Many of our staff have also taken voluntary salary cuts. Recruitment is taking place only by exception, and restructures are resulting in redundancies across the organisation.  1100 contractors roles have already been reviewed and the emergency budget is going to result in hundreds of job losses ].

Many of those arguing for a rates freeze or a lower rates rise in their feedback were actually asking for a 3.5% package of services and for council to continue to play a role in the covid-19 recovery and improving community well being.  This is what came through strongly from the local boards who were unanimous in supporting 3.5% and referred frequently to the key budget considerations/principles that the Mayor spoke of and in particular protecting the most vulnerable. They are on the ground with their communities and understand the hardship that will be caused by aggressive cuts.  For this reason I support the reestablishment to local board of their discretionary budget (known as Locally Driven Initiatives – LDI budget) . They can act nimbly and responsively to community needs though grants, environmental programmes, events and extended hours and programmes at valued community facilities.  Huge credit to you madam chair for bringing the local boards along on the emergency budget journey right from the earliest days of our Skype meetings in lockdown.   As has been said it has been the most collaborative co-governance process ever and you have done a superb job.

In taking into account the feedback  it also needs to be emphasized, while acknowledging the huge effort to collate 34k submissions, that there is a gap in the consultation summary.   The submissions from organisations have been lumped together and counted individually if identified as “regional” rather than as a stakeholder or mana whenua group.    There is in fact strong support for a 3.5% package proposal from diverse groups across Tamaki Makaurau  – faith groups, sports and environmental organisations, residents associations, service clubs, unions, arts and culture organizations and business associations – collectively representing hundreds of thousands of members.

If I have any misgivings about the budget is that in responding to an emergency we haven’t achieved a strategic reset, there is a tendency to fall back on business as usual rather than building back better and a push to side line our climate initiatives as a “nice to have” rather  integral to the council’s crisis response to avoid an even worse emergency.

I also find it hugely frustrating that cycleway projects have been deferred that Auckland Transport should have delivered 3 years ago from funding first announced when John Key was PM – that sure feels like a life time ago! These projects shouldn’t even be part of this discussion.

But overall there is a lot to support as a package developed in very difficult circumstances. I thank the Mayor for protecting the new budget for reducing council’s green house gas emissions, living wage and our homelessness response.   I’m pleased that we have additional budget for road safety and that there is scope for the work programme to be further tweaked and reviewed on the way through if additional funds become available.  I also heard Auckland Transport confirm that they are committed to taking a more innovative approach.  I hope that carries across the council whanau in all our programmes.

I believe we have a strong mandate for what is before us taking into account the feedback, the views of local boards, all the financial information and the updated information we have received on the expenditure required to respond to the drought.  We’ve found considerable reductions to expenditure including cuts to staff numbers are already underway – and I acknowledge how difficult that is .  I think we have taken the right approach targeting support for rate payers facing financial hardship (through the rates postponement option) rather than an across the board rates cut that would have led to dire consequences.  The budget takes the investment approach to the post covid recovery rather than austerity [Note*: The 2020/21 capex budget (pre-Covid-19) was set at a record $2.6 billion. To help us remain fiscally prudent in the face of a projected $500 million revenue shortfall and retain community and investor confidence in our financial position, one of the measures we consulted on was smaller capex programme of $2.3 billion. However, by working through our budget and collaborating with central government, it is likely we will have the capacity to increase this back close to previously planned levels so that we can keep the economy moving forward and supply the assets that Aucklanders require, including drought related works. Reducing our investment program would only drive the economy deeper into recession.]

Going into the long term plan / 10 year budget  (a process starting in only a few weeks)  I wish to see us not lose momentum on work to build community health, well being and resilience. If this has been an emergency budget  the next one – the LTP must be a climate action budget.

I’d like to end with a quote that is attributed to Joe Biden but is said by city leaders around the world:

Thanks to everyone for their hard work.

The alternative – cuts under a 2.5% rates increase budget package

Todd Niall in Stuff:  Auckland Council budget: Rates up 3.5 per cent and more than 500 jobs to go

*Notes taken from  Auckland Council’s Emergency Budget – The Facts by the Deputy Mayor, Bill Cashmore in response to the Auckland Ratepayers Alliance campaign “Is the Council really ‘cutting back’ or is the Mayor telling porkies?” circulated before the vote.  For a copy please email me on pippa.coom@aucklandcouncil.govt.nz