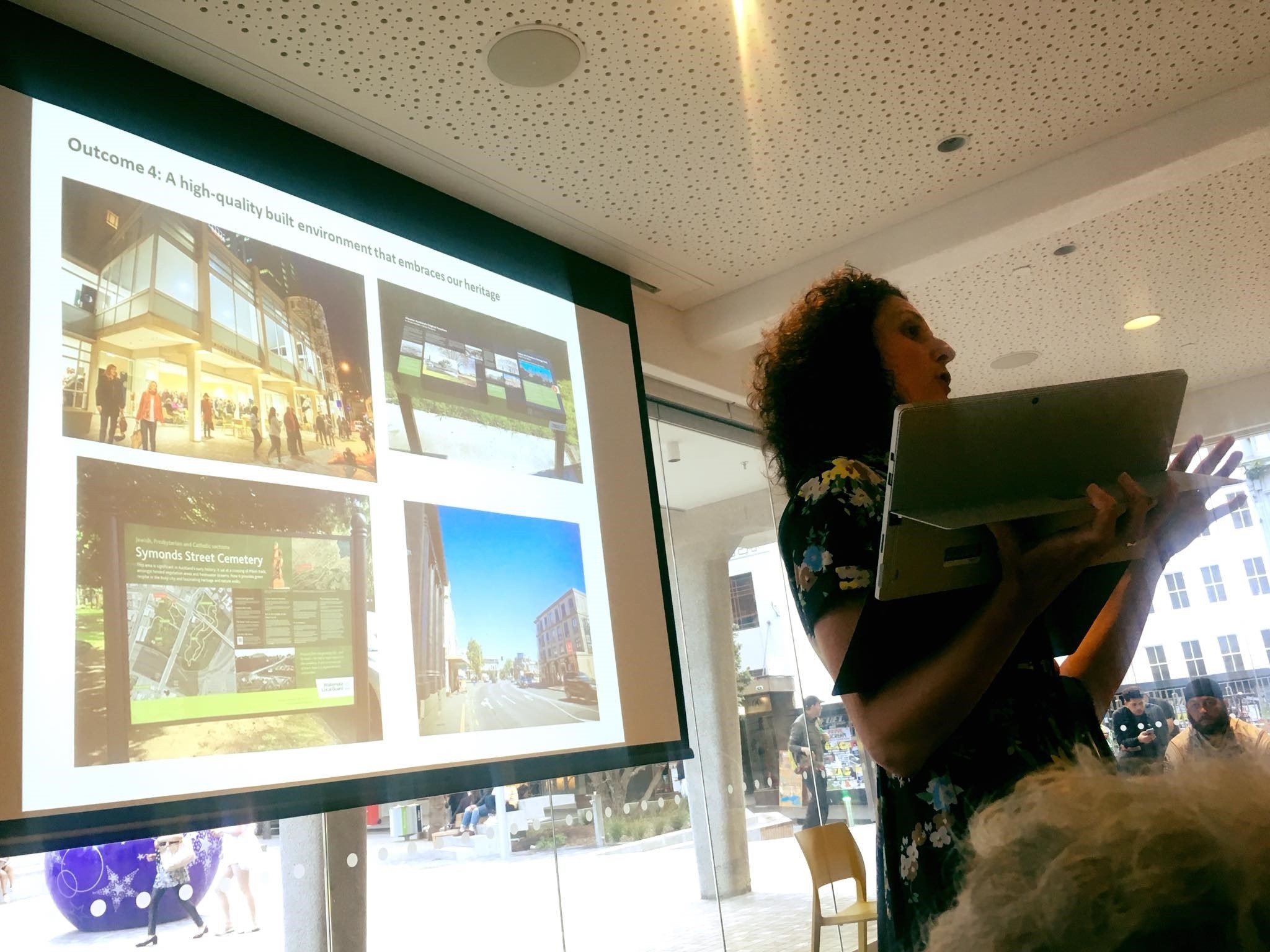 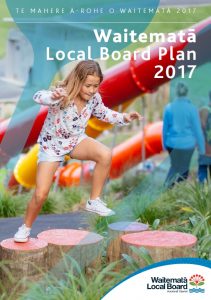 It was great to end the year with the launch of the Waitematā Local Board 2017 plan at the Ellen Melville Centre (photo below).   The evening also included a presentation by Deputy Chair Shale Chambers on the Board’s Achievement report 16/17. (Presentation Attachment 2)

After a summer break I got back to work on 15 January focused on catching up on correspondence, preparing for the year ahead and attending a range of meetings with community representatives.  Some of the issues I have been dealing with are outlined below.

The first board weekly workshop of the year was held on 30 January. 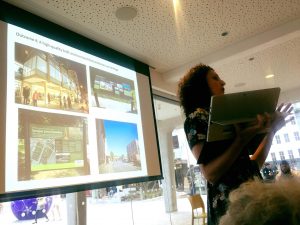 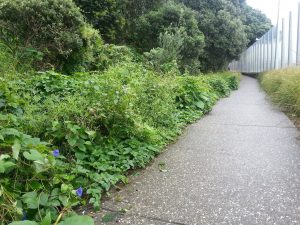 The board continues to receive complaints regarding the level of maintenance by Council’s contractor Ventia.  Many of these complaints stem from long standing poor levels of upkeep prior to Ventia taking over the maintenance contracts on 1 July 2017.

Working with the parks portfolio I am particularly focused on tackling the upkeep of our city centre squares and shared spaces and the weed issues in Rose Rd Gully in Grey Lynn Park and St Marys Bay reserve and footpath (photo right).

We are also seeing a decline in the level of maintenance of berms and kerbs by AT’s contractor Downer (AT has responded by withholding performance payments).  This contract will move to Ventia on 1 July. 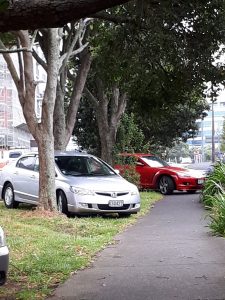 Auckland Transport has stopped enforcement of parking on some berms and footpaths in the city centre following legal advice that signage is needed to enforce the relevant bylaw. This has led to an increase in complaints regarding a few hot spots such as on Union Street (Photo left).

This is a disappointingly cautious interpretation of AT’s responsibilities, but steps are under way to install appropriate signage so that enforcement can start.

Another parking issue I’m actively following up with AT is the long standing practice of car transporters using Great North Road no parking zones to unload vehicles putting all road users at unnecessary risk.

Following the issues with the Waitemata Safer Routes project on Richmond Road and Garnet Road that were the focus of intense debate at the end of last year (reported on in my December Chair’s report) we are in the process of agreeing with Auckland Transport the way forward to address issues and develop an appropriate cycleway design that has buy-in from the wider community.

Auckland Transport has started a technical review of the routes including a safety audit and review of bus stop locations. AT will work with a Community Liaison Group for both routes.  The technical review is likely to take 4 – 6 months and will involve public consultation on any new design aspects.

With the settled weather at the end of last year City Parks, on behalf of Regional Facilities Auckland, were able to make good progress finishing the track work from the Outer Fields up to Old Mill Rd (photo right).

It is great to see the work progress after many years of neglect of this bush area just off the Bullock Track. 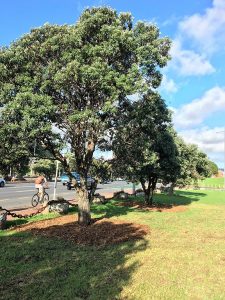 In early January Auckland Transport started work on the Quay Street cycleway extension requiring the relocation of 14 trees from the central medium to maintain the existing number of vehicle and parking lanes (photo right – relocated tree at Teal Park).  The board would have preferred for the trees to remain, but supported Auckland Transport going through a notified resource consent process to determine whether the trees could be moved and under what conditions.

I took up Greg Edmonds’, Chief Infrastructure Officer, Auckland Transport, offer to discuss enhanced greening options for the corridor on 21 January.  The proposed design was then brought by AT to a board workshop and is progressing to ensure there is as much new planting as possible.

Auckland Transport has also brought the proposed design of the Tamaki Drive cycleway route (The Strand to Ngapipi Drive) back to the Board following concerns we raised about the safety of a section of shared path and the slip lanes at the intersection with Solent Street. 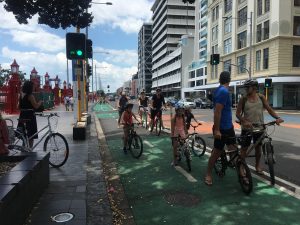 I have also raised concerns about the design with NZTA (who are responsible for the Strand intersection) as we need to ensure fit for purpose infrastructure is installed to cater for the projected increase in cycle numbers.

The network effect of connected, safe separated cycleway is having results by attracted new riders with a 7.9 % annual increase in 2017 (as reported in AT’s monthly report).   For the first time, on Waitangi Day, the Quay Street cycleway counter hit over 2000 trips.  (Photo right: Quay St on anniversary weekend)

On 25 January Auckland Transport released the draft Regional Land Transport Plan (RLTP) budget with a massive reduction to the cycle budget, low prioritization of light right and cuts to rail operating funds. AT officials claimed it was just a draft for consultation. Chair of AT, Lester Levy quickly apologized for the draft saying it had been inadvertently released.

I attended Auckland Transport board meeting with Cr Chris Darby on 2 February to show my support for the AT Board directing management to redraft the RLTP budget to more accurately reflect priorities that Council and Government now give to walking and cycling, public transport and reducing carbon emissions.

The draft will go out for consultation at the same time as the Council’s 10 year budget on 28 February. [Since confirmed by AT that consultation will now start in April ]

The Waitematā Local Board hosted an information session on 31 January for representatives from community facilities to discuss how we can best support emergency preparedness. Auckland Emergency Management identified the 13 facilities as potentially safe locations for people to gather in respond to any major humanitarian need.

We sought feedback about joining a network of locations that can support annual initiatives to educate and prepare our communities in case of a major disaster and help contribute towards building the resilience of our community. A follow up meeting will be held on 21 February.

The Board has started a long-awaited process to draft a Parnell Plan building on the work of the Parnell Community Committee’s Parnell Tomorrow document to develop a strategic vision for Parnell to influence the development of Auckland’s first suburb.

An introductory workshop was held on 12 February with a community working group.

I am the Board’s rep on the working group together with board member Vernon Tava (Richard Northey as alternate).

Events and functions:  13 December until 12 February 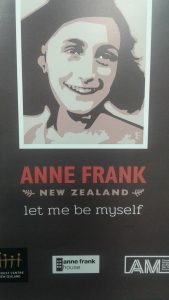