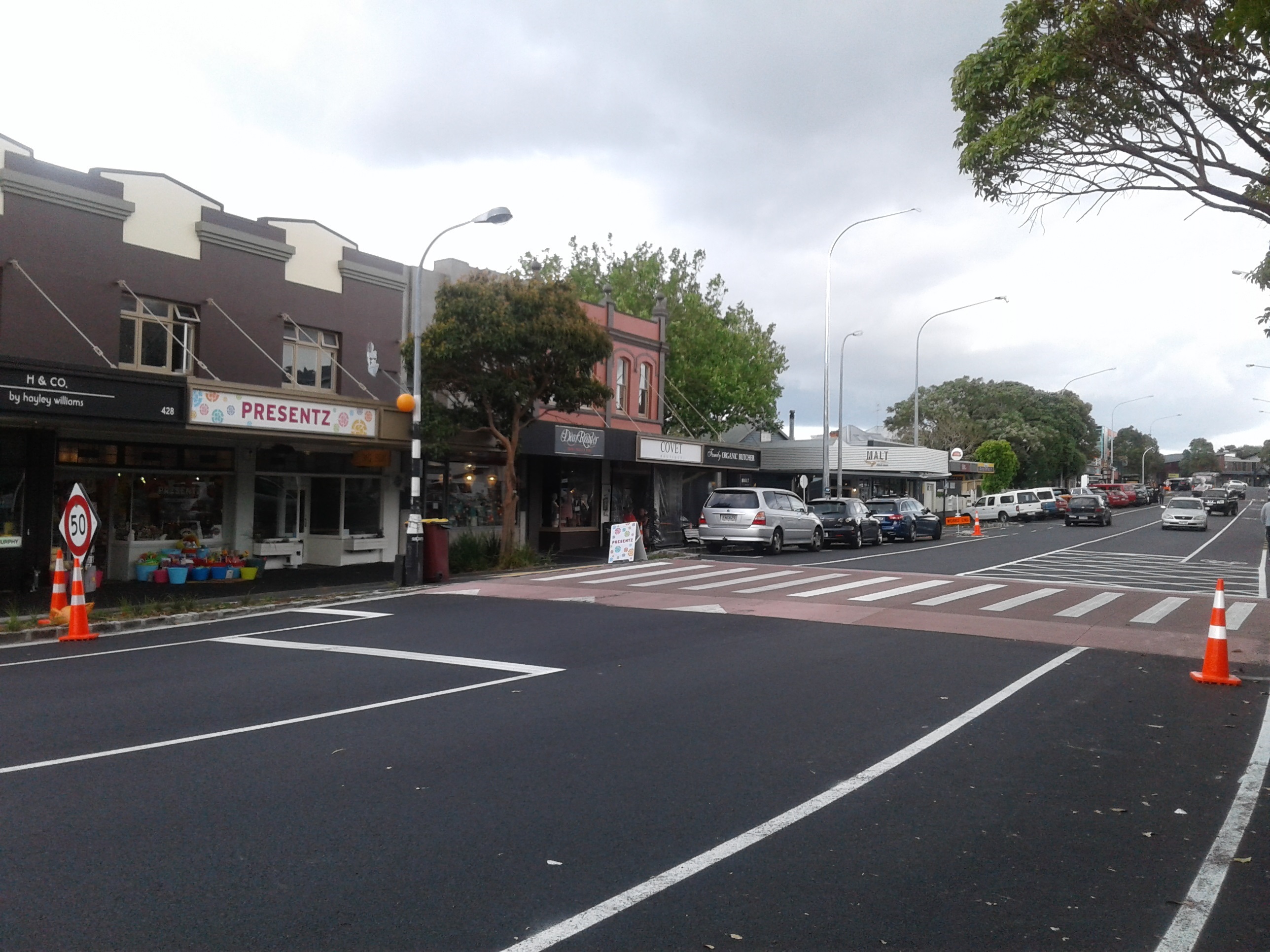 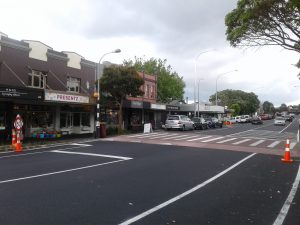 This is quite a long read but it responds to a lot of issues currently under review concerning two cycling projects in the Waitematā Local Board area that form part of a package of projects known as Waitemata Safe Routes.  I will keep this post updated as the projects progress.

Since my update below – tabled as part of my monthly Chair’s report – the local board has met with Greg Edmonds, Chief Infrastructure Officer at Auckland Transport, members of his project team, Kathryn King the head of Walking & Cycling and communications and engagement advisers.

At the meeting on 13 December discussed what is currently on hold pending safety and design reviews  and what work is continuing to make the routes safe.  This information has been advised to residents along the routes, the Occupy Garnet Road protest group and is now on the AT website.    We also discussed safety improvements that AT would look to get in place ahead of the school term starting next year such as the crossing points on Surrey Crescent.  As advised by AT there will be further consultation on aspects of the design (including a re-design of the West Lynn shops that will go through a community reference group first).  The exact consultation process is to be discussed further with the board.

Greg outlined a proposed AT process going forward for all cycling projects. The board supported a new process framework being put in place. The AT Executive team will want to know that there is agreement from key stakeholders including the Local Board and the Auckland Design Office overseen by a Project Control Group. If there isn’t agreement the PCG will escalate the project to Greg Edmonds.

The following update was attached to my Chair’s monthly report tabled at the Waitemata Local Board business meeting on 12 December 2017.  (anything in [         ] has been added online since I gave the update at the board meeting)

The attached updates (letters to residents that are now on the AT website)  have been sent to Grey Lynn residents by Auckland Transport outlining what work is being completed and what work that has been halted pending a review of two Waitemata Safe Route projects.

The Waitematā Local Board has met with Auckland Transport [the project team] and is actively working on the solutions and an agreed process for further consultation of any proposals that come out of the review.

At the same time I’ve been reflecting on what led to what Simon Wilson from the Spinoff called a “fiasco” and what should have been done differently.    This is both personal and political. I live, hang out and shop in Grey Lynn.  West Lynn is “my” village.  I want the best for the whole of Waitematā, so our different communities feel proud of changes that make it safer and more pleasant to get around.  I also appreciate the importance of bringing people along with the process and listening to a range of views.  As I’ve heard the former Mayor of Copenhagen say “A good city means dialogue and controversy – getting people engaged in their environment and its transformations can only be a good sign of things to come”.

There are two routes currently the subject of intense debate.  Although there are common issues, the projects are distinct, with different issues and responses.  Both routes were consulted on at the same time as part of a package of four routes known as the Waitemata Safe Routes including Great North Road and the Grey Lynn Greenway (now delivered but not without its own controversary on the Grosvenor Street section)

The timing of the consultation on the four routes coinciding with the Local Government election in September 2016 was incredibly ill advised . It was against the wishes of the local board, Councillor Lee and Local board services staff.   Simon Wilson calls it “preposterous” that we didn’t campaign to make it an election issue.  But that’s the whole point – transport consultations shouldn’t become election issues because of the timing of the consultation. We want to hear the feedback from the public first, understand the issues and possible solutions and then provide local board input. This is what is happening right now with the Grey Lynn & Arch Hill Residential Parking Zone consultation.

My involvement in this project goes back to a meeting hosted by Grey Lynn 2030 in 2009 with David Engwicht, known as the inventor of the walking school bus.  (the outcome of that meeting detailed here )

A traffic calming group was established to push for the adoption of his “Mental speed bumps” theories of reclaiming the street to slow down vehicles.  In 2010 the group presented to the Western Bays Community Board a survey of local traffic concerns including speed and pedestrian safety detailed here

By the time I was elected in October 2010 and working on the transport portfolio (a position I still hold) it became clear there was range of issues along the entire length of Richmond Road.  For example, the Peel Street and Warnock Street intersections were the subject of regular complaints.  Richmond Road school was battling for a signalized pedestrian crossing.  The intersection of Surrey Crescent and Richmond was “upgraded” by AT in early 2011 but fell short of the board’s request for a design that provided a safe crossing for kids walking to school.

We brought together all the issues in a Richmond Road Safety Action Plan in 2012  (consulted on as part of our Local Board Agreement in 2012 and 2013). The plan requested AT to target the shopping areas and school zones concentrating on pedestrian and cycle safety and traffic calming together with good urban design to provide enhanced overall attractiveness and amenity. (I wrote about this project in an update in Ponsonby News about Richmond Road)

Designs for a cycleway on Richmond Road were first drawn up in 2012/2013 but went on hold until funding became available through the government’s Urban Cycleways Investment Fund.

Issues raised through the basic consultation process (now under review) undertaken by AT last year were relatively minor. The main concern that I took up was the location of the bus stop outside Nature Bay which didn’t seem to be logical.

From the Board’s perspective there was a lot to support about the design –  it could be done with minimal parking loss and included a range of safety improvements with extras like more planting and street furniture.  If anything, the design was criticized for not going far enough to slow the traffic and make cycling safe along the entire length.   Bike Auckland’s feedback asked AT to set up a community reference group to go through the details of the design but this was ignored by AT.

With the benefit of hindsight it perhaps seems obvious that the project should have been approached as a design-led street upgrade (as is happening for the K’rd streetscape upgrade) but there are a range of factors as to why this didn’t happen:

However the original uproar in West Lynn (from the businesses in particular) was not so much about the design but arose originally from a number of other issues:

A wider review of the whole Richmond Road route is now underway but for West Lynn shops many of the issues (first identified on a site visit I did with AT three weeks ago  [17 November]) are already in the process of being resolved.  The parking has changed but once marked out there is likely to be just as much parking serving the shops as prior to the construction (it has been incorrectly reported that all the parking has been removed outside Harvest).

The business association has been incredibly pro-active working with Auckland Transport and bringing all the businesses together to a launch a “West Lynn Shops” campaign- “Good bye roadworks.  Hello pathways, cycleways and parking!”

Like Richmond Road this route has been on the Auckland Cycle network for almost two decades. It also received funding from the Urban Cycleways Fund.

Auckland Transport consulted on two options. One option of a cycleway on the road requiring the removal of 40% of the parking and another option using the berm for the cycleway.    Feedback was very mixed.   The local board opposed both options and asked Auckland Transport to re-consult on a new design using the carriageway.   This was rejected on the basis of cost.

The Board passed the following resolution at our November Board meeting [on 21 November] and the next day I joined a meeting with Auckland Transport and the group made up of local residents, Urban Tree Alliance representatives and protestors at the Old Mill Road/Motions Road intersection[Occupy Garnet Road Group].

As confirmed above Auckland Transport has advised residents as to what work will be completed to be made safe and what is on hold pending a wider review.   Community Reference Groups will be set up for West Lynn and the wider Safer Routes project.  In collaboration with the West Lynn group (led by the GLBA co-chair) work is already underway to address immediate issues in West Lynn.  Boffa Miskell have been appointed to lead the review of the design of the village area. A silver lining from the “fiasco” is that it has brought the community together and will result in far more investment in West Lynn than was originally planned.   AT has offered a procedure for making a loss of business claim for the businesses impacted by the construction.

It is positive that Auckland Transport has committed to a new transparent, cooperative approach involving the local board that we expect to extend to all our projects.  In the longer term we are seeing the start of a shake up at Auckland Transport that has already been signaled with the arrival of a new CEO.    Since the beginning of the super city AT has far too often ignored local board priorities (the legislation requires AT to take account of local board plans – but this often doesn’t happen) and “wins” have required unnecessarily hard-fought battles by the local board and community.

The Board has been incredibly effective at achieving better outcomes than what was originally on offer (such as the Ponsonby Pedestrian Improvements Project, Franklin Road upgrade and the Teed St upgrade) but too often this has been despite AT.   I’m looking forward to a new dynamic and AT acceptance that local boards are responsible for place making. In the meantime, the Waitemata Safe Routes projects shows the board (and me in particular as transport lead) needs to be constantly vigilant and challenge AT processes and projects at every step of the way.

I am also hopeful that following AT’s review of the current Grey Lynn projects we can look forward to greatly improved urban design, the function of placemaking firmly in the control local boards and the continued delivery of good quality, cycleways and safer streets that benefit the whole community.

The fiasco in West Lynn: how did Auckland Transport get a shopping village makeover so wrong,  Simon Wilson in The Spinoff

After the West Lynn debacle: a better way to plan Auckland’s suburbs, Simon Wilson in the Spinoff

The extraordinary incompetence of AT, Simon Wilson in the Spinoff