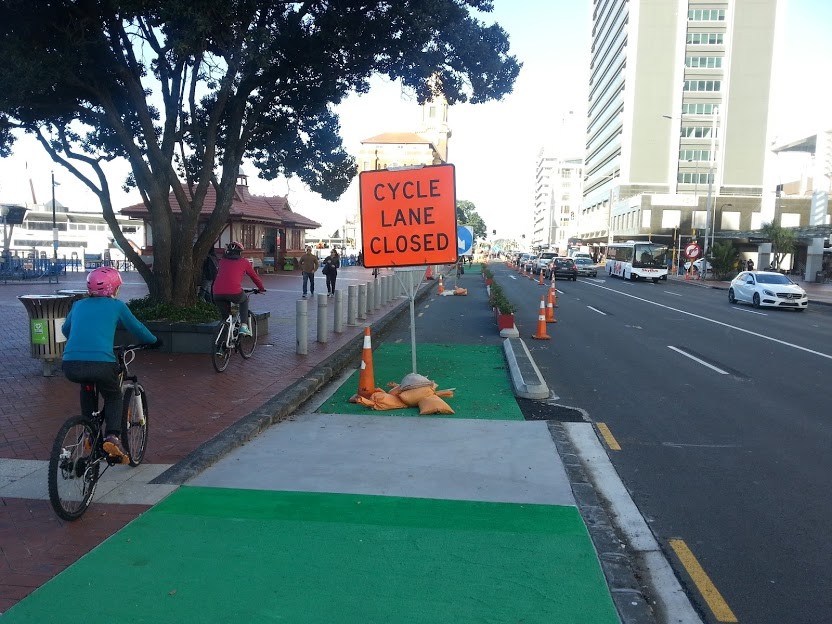 This report covers my Waitematā Local Board activities from 1 June to 10 July 2016 as Deputy Chair, lead for the Community and Transport portfolios, and Chair of the Grants Committee, and with positions on the Ponsonby Business Association Board and Ponsonby Community Centre Committee and Board liaison for the Parnell Community Centre.

I was also acting chair for the week of 27 June when I attended the Local Chair’s Forum and the Auckland City Centre Advisory Board meeting. 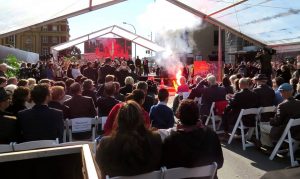 On Thursday 2 June Mayor Len Brown, Auckland Transport chairman Dr Lester Levy, Prime Minister John Key and Minister of Transport Simon Bridges officially marked the start of the construction for the City Rail Link.  It was an explosive ground breaking event with special cupcakes and a fantastic flash mob dance sequence involving many of the CRL workers. More importantly it was an opportunity to acknowledge Mayor Len’s role (and the many people who supported him such as Cr Mike Lee) in pushing ahead with this vital transport project that has been 93 years in the making. 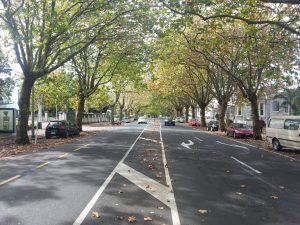 My notice of motion requesting Auckland Transport to develop a street tree planting policy was unanimously passed by the Waitematā Local Board at our June business meeting.

That the Waitematā Local Board:

i) notes the benefits of urban street trees and the Auckland Plan, City Centre Master Plan and Waitematā Local Board Plan 2014 commitment to plant street trees;

b) A strategy to meet the City Centre Masterplan street tree target of a 25% increase by 2021; 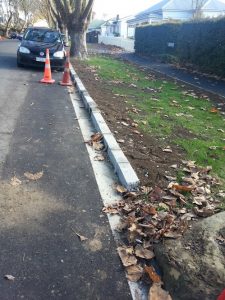 I’ve been following up on the concerns residents have raised about the kerb and channelling work currently underway by Auckland Transport’s contractors that involves removing the blue stone kerbing.

Auckland Transport has responded that:

the kerbs are being removed in places due to the disruptions of the tree roots, the tree roots are then unable to be cover over (as per the arborists direction)  therefore AT is unable to replace like for like and has to put in concrete and pointing of which is coloured, this does give a piece meal effect/look but as we are not able to replace with any kerb type i.e. (blue stone ) our hands are tied

The only way to replace blue stone kerbing over tree roots is by putting in a bigger lintel over the roots, unfortunately the arborists has said we are not allow to do so in some places where the kerb is not replaced and there appears to be no trees, this is because there is 3 applications from residents for vehicle crossings

However the road appears to have been widened thereby pushing the kerb closer to the tree roots.  There appears to be a mismatch of concrete and blue stone in big sections between trees not just around the trunk of the tree (as in the photo above). Large areas of blue stone kerbing stones appear to have disappeared without justification when similar streets have retained the traditional kerbing as part of an upgrade (eg Selbourne Street).  The works have also resulted in damage to house frontages.  I will continue to work on this with the residents until we receive a satisfactory response from Auckland Transport. 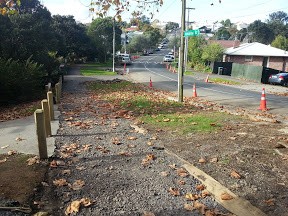 A further issue I am following up is the continuation of the kerbing work despite plans for on road greenway works at the exit of Hakanoa Reserve (photo above) and planned pedestrian/cycleway improvements at the intersection with Richmond Road.

Auckland Transport has not explained the duplication of works and the additional costs.

Consultation on the renaming of lower Khartoum Place with a suitable name associated with women’s suffrage, and in recognition of the Women’s Suffrage Centenary Memorial 1893-1993 ‘Women Achieve the Vote’ ended on 25 May.

From the 137 submissions there was strong support for the name change.  Details of the feedback and a decision making report are on the Board’s agenda this month.   It is looking positive that we will be a position to change the name in time for Suffrage Day in September. 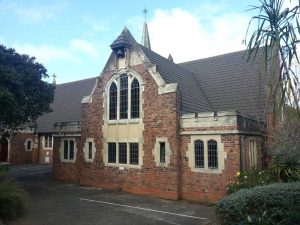 I have been following events at St Columba in Grey Lynn and attended two community hui held during June to discuss the future of the parish.

Following financial difficulties last year the Anglican Diocese commissioned a report to consider the options available to the parish.   The report concluded with three redevelopment options that all involved demolishing the church and facilities on the site including the hall, community garden and labyrinth. This led a campaign to save St Columba involving the wider community.

On 1 July the following statement was issued by the the Anglican Bishops of Auckland and the Vicar of St Columba Grey Lynn.

Conversations are underway to assist the Parish of St Columba Grey Lynn to address some significant challenges that have developed over a long period of time.

Those challenges are related to finance and the ongoing costs of providing ministry in the community. They include the maintenance of buildings.

The Bishops and the diocesan leadership are working closely with the Vicar and the people of the Parish to seek a long-term solution.

The Diocese continues to have a commitment to the community of Grey Lynn. That commitment is being indicated in conversations that included a visit to the parish last weekend. The Diocese and the Parish are grateful for the support of the wider community.

Further conversations are anticipated with no decisions made at this point.

The final Grants Committee was held on June to consider applications to the fourth and final round of the grants fund for 15/16. A total of $38,613.00 was available to distribute. The committee approved grants totally $29,791.00 to a range of community groups and organisations. 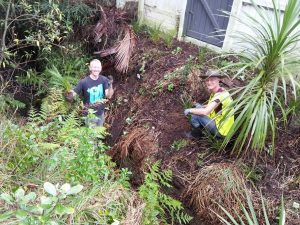 Annual planting day along the banks of the Waipapa Stream in Parnell was attended by Councillor Mike Lee, representatives from the Waitemata Local Board, Parnell Heritage, Parnell Community Committee, and local neighbours. It is great to see the many years of volunteer labour to re-habilitate the stream is paying off.

Mary Stewart, Senior Biosecurity Advisor, who has been coordinating the planting,is looking to work with Parnell Heritage and the Parnell Community Committee to engage with the surrounding residents to encourage best environmental practices nearby.  The stream has greatly improved  but practices continue that threaten the area (such as growing plants that are weeds in the apartments that are dropping into the stream and naturalising, dumping of garden waste, plant tags, pots, trimmings, old plants, dumping of rubbish and liquids (killing off plants) using driveway cleaners that kill trees). 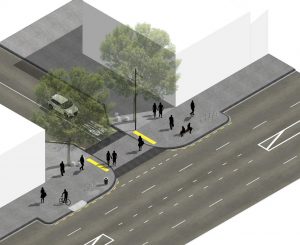 In the July Our Auckland Waitematā Local Board members feature in a story regarding the Board funded project to create a safe and consistent pedestrian experience along Ponsonsby Road between Franklin Road and Williamson Ave (the project was consulted on in November 2015). As mentioned in the article the work was meant to have started in June.

Unfortunately Auckland Transport missed the construction deadline for the works on Lincoln and Collingwood Streets in the last financial year and now has a budget shortfall. We are working through the budget details with Auckland Transport and the consultation process to get the feedback on intersection furniture layouts, materials, and street furniture.

It is now expected that the construction will start late August/early September 2016.

The mystery of Auckland Transport’s berm planting guidelines continues. I’ve given regular updates in my report regarding progress on guidelines that were promised by Easter.

A resident was recently advised the following after she complained about the destruction of her berm garden.

In Central, we mow all berms if they exceed or are approaching a height of 200mm. Our mowing operators work in tandem, with the bulk of the berm mown with a ride-on mower, and then followed up shortly afterwards with weed-eaters to remove encroaching grasses from the edge of footpaths and the kerbside, and around trees and poles which the ride-on mowers cannot reach.  Given the large number of berms to be mown across the city this actually provides better value for ratepayers than the stop-start method of one operator undertaking both activities.

Auckland Transport offered to put her on a no mow register which defeated the point as she had only grown a berm garden after being told she was responsible for it as she wasn’t physically able to mow the verge herself. The resident is now happy for AT to mow her berm again. 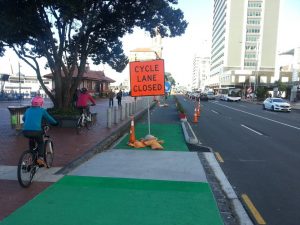 At the time of writing my report the cycleway was still closed but attracting large numbers on a sunny weekend.  With the Quay Street Cycleway another gap is connected in the central city cycle network.

Auckland Conversations : The future of housing in Auckland 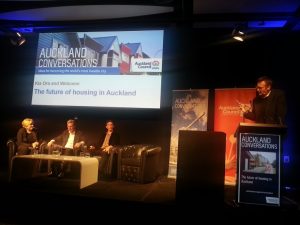 With Auckland growing at a rate of 896 people a week how can everyone be guaranteed a home, either to buy or rent? Auckland clearly needs new housing options so the economic benefits of growth can be shared by all as we establish our place among the world’s most successful cities.

An excellent discussion about the current Auckland Housing crisis and what is needed to fix it. One big take away pushed by Bernard Hickey  is that young people need to vote in the Local Government Election in September.

The full discussion can be viewed on you tube 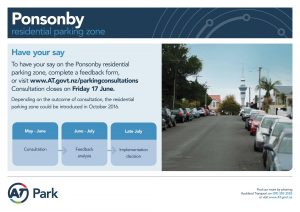 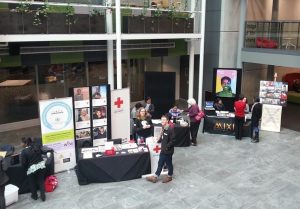 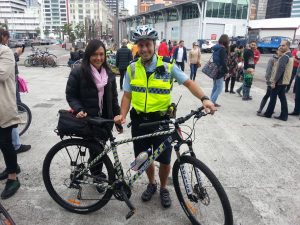