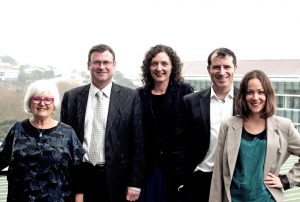 With one year until the local government election, elected representatives from City Vision in Waitemata are pleased with their achievements promoting progressive policies since the new council was established.

The new Auckland Council came into existence two years ago and at that time many people worried it would mean local communities would lose their voice. “We’ve been fighting to make sure the new structure looks after our local communities,” says City Vision member of the Waitemata Local Board Shale Chambers.

“Progressive elected members on the Governing Body and Local Boards of Auckland Council have had their shoulders to the wheel delivering better public transport, keeping rates fair, protecting heritage and the environment, and supporting investment in our local communities.

Mr Chambers was speaking to launch the two year accountability report for City Vision in Waitemata. He says City Vision and supporting groups (made up of Labour, Greens and community independents) have been working together to try and make the new unified governance structure a success.

“We think it’s important to communicate what we have been doing at the same time as listening to what people think is important about their city. Many people tell us they’re pleased to see progressive values becoming embedded in Auckland.

“Many people had strong reservations about the ‘Supercity’ at the time of its creation, and while concerns remain, we’re working to bring Auckland together, end the negative do-nothing politics of the past and give our communities a voice.

“While some on Council have chosen to snipe from the sidelines and play negative political games, we have focussed on the issues that matter for Aucklanders.

“Two years since the establishment of the new Auckland Council we are proud of our achievements, but also see much to be done. The disastrous Ports dispute must be solved fairly, CCOs need to be opened up to more public scrutiny, Local Boards need more equitable funding, the government should support our public transport agenda and Council must hold its nerve on the vision of a quality compact city. Our elected members will continue to speak up for our communities on all of these issues”, says Shale Chambers.

City vision has produced 3 separate two year accountability reports covering Waitemata, Albert-Eden and Puketapapa. Around 90,000 reports in total have been produced for the whole area.

Albert Eden Local Board – 5 City Vision members (out of 8 from 2 subdivisions) led by Chair, Peter Haynes