Pecha Kucha is a fabulous way to share ideas. The 20x 20 format gives presenters the opportunity to speak to 20 images for just 20 seconds per image. Luka Hinse, who brought Pecha Kucha to Auckland in 2007, is unorthodox when it comes to selecting presenters. Traditionally drawn from design, architecture, photography, art and creative fields, he likes to put together a more eclectic line up of speakers.  Thanks to his approach I was lucky to take part in PKN AKL 27 and to share the line up with friends Maya Nova, Reza Fuard (Mindfulness-an experience)  and Amanda Judd (A journey of a social entrepreneur).

Frocks on Bikes – how stylish cycling is changing bike culture 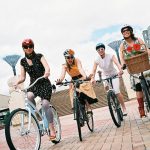 Gorgeous, stylish women with an enthusiasm for fun, socialising and living sustainably who also just happen to love riding their bikes.

A couple of years ago a group of  Welly women felt frustrated with the image of cycling as macho sporty and dangerous. They took no joy away from events like Go by Bike days with the focus on the lycra clad

These wonderfully creative women were inspired to form Frocks on Bikes in conjunction with a 350 climate change event. A relationship of style and sustainability that continues today. 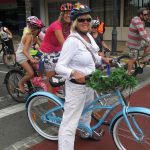 Frocks on Bikes has given rise to a new dictionary definition:  “To Frock” a verb meaning to bike ride in everyday style  As a noun – I am a frocker.  As an adjective – a frocking or frockilicious bike ride. And even perhaps as an adverb “Frockingly”?

The mothership of frocks on Bikes in Wellington has given life to Frock Flocks all over Aotearoa. Christchurch –hopefully out of devastation to be reborn as the cycling capital of NZ– Nelson, Palmy North, New Plymouth, Rotorua, Tauranga, as far as away as Melbourne and more recently I was honoured to take part in the launch of the Gisborne Flock.

The flocks up hold the Frock kaupapa as set out in a Frock manifesto. There is no joining fee, formal structure or official programme. 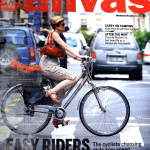 We are a movement connected online and with enthusiasm for fun, sustainability, invigoration and socialising. We say anything in our wardrobe is cycling gear.  You don’t have to be fit, or slim, or the slightest bit sport to Frock. It is about dressing for the best of style and practicality.

I’m the co-ordinator of Frocks on Bikes Auckland with Jenny Marshall, aka Unity Finesmith of Auckland Cycle chic blog . I come to Frocks from a cycling advocacy background and a desire to change cycling culture in New Zealand so that whatever your style you can embrace riding a bike for transport or pleasure.

Frocks in unashamedly for the ladies. We appeal to women who are the key to our sustainable transport future. Women who are ready to move on from Remuera Tractors, congestion and car domination. Who measure coolness by the colour of their wheels,  and the shape of their basket. 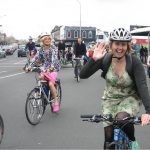 They want to look good riding a bike and once we’ve won women over a  whole new generation of riders will follow.

Every frock flock runs with Frock events that best suits their patch. In Auckland we have done spring rides, Santa Parades, climate action events – we will be frocking for moving planet on 24 September. Try my bike evenings for women have provided the opportunity to test ride, in a girlie environment, the huge range of stylish bikes now available.

And my favourite – Cycle Style Auckland – held last year but planned again the end of summer 2012. An evening of fabulous bikes and fashion bought together on the bike walk. A crowd of 500 showed up in the middle of winder, many arriving by bike. We won over the retailers that  night who have been slow to appreciate the untapped demand to frock. The event won the best cycle promotion at the ASB cycle friendly awards last year. 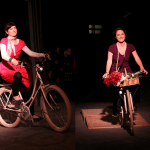 We appeal to all kinds of women often accompanied by their stylish gentlemen friends. From fixes, BMX riders, babies on the back, middle aged women giving it a go for the first time in many years.  Frocking is just spontaneously happening. You can find Frocks fixing their bikes at Tumeke Cycle space, commuting, running errands, taking part in Critical Mass, taking kids to school AND just riding because they want to and can.

Frocks is positive, friendly and encouraging. Whatever your shape or size you can be frockilicious. Frocks on Bikes is street wise and safety savvy – a short skirt works for me to keep drivers at a respectable distance!

I think we have been successful in changing the perception of cycling of getting women to give it a go, and of providing the media the opportunity to present cycling in a whole new light – positive, fun and “normal”. The kind of images we have only previously believed existed in sophisticated European cities with a civilised driving culture. 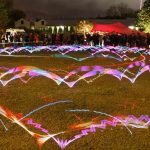 We’ve inspired spin-offs into creative expressions of frocking. The group known as the velociteers introduced synchronised cycling to Auckland at Art of the Dark, the interactive community art event in Western Park last October. The mothership in Welly – never ones to be outdone – took up this challenge to organise their own synchronised Frock performance for the opening of the Christmas lights in Wellington. The Velociteers will be back in action at the West Lynn Street Party on 29 September – to give the event a plug – and no doubt brightening up our streets this Christmas. 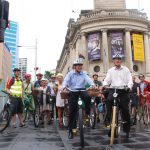 Frocking has changed bike culture from the bottom up.  We now also have a mayor who has embraced everyday cycling – if not quite bought his own bike.  Mayor Brown was joined by the Auckland Frock Flock at the Go by Bike Day in February – no lycra in sight.  The Mayor has agreed to build the cycleway over the Auckland Harbour Bridge so we can frock smoothly and safely to the North Shore.   Best of all for urban design we have  finally achieved  frocking heaven at the Wynyard Quarter which opened a couple of weeks ago with a bike bus of Frocks taking it to the waterfront.  Stylish everyday riders are everywhere to be seen. 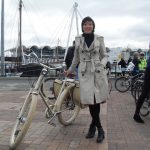 We are all on the way to a cycling friendly Aotearoa brought about by the dedicated cycling advocates working behind the scenes to fight for improved cycling infrastructure, everyone who just gets on a bike whatever their look AND frock-tivity!   Frocks on Bikes has inspired culture change by being conspicuous, positive and fund so that cycling style is just the way we do it in Auckland.

I would like to end by thanking the photographers for the use of their images -Rod Haag, Pascall Languillon, John Darroch, Andy Morley- Hall, and Jeremy Redding –  gentlemen who love Frocks. How can you not.