Strong local boards are going to be crucial to the effective governance of the Auckland Super City. If the boards across the Auckland Region don’t work well with each other, the CCOs and the Auckland Council we are going to end up in a complete mess of parochial decision making.

The structure is intended to give the local boards and Auckland Council complimentary and non-hierarchical decision making functions. However much of the decision making will be delegated or allocated from the Council as the governing body. Through the select committee process, my community group Grey Lynn 2030, like many others, argued that the local boards should have powers and responsibilities prescribed in legislation so they could act as a counter balance to the powers of Auckland Council.

The lack of prescription could in fact end up being a good thing if the first mayor sets the framework for local boards that provides for real local decision making functions. Len Brown’s policy document on local democracy &  local boards gives a clear commitment on the extensive role he would like for the local boards.

Local boards should be involved in planning and policy related to their communities. They should develop long term community plans and annual plans, as well as contributing to regional policy-making and giving effect to regional plans. They should then develop local policy within the regional framework in areas like, for example, dog control, gambling and gaming machines, licensing of cafes, bars and liquor outlets, brothels, and the development of town centres. 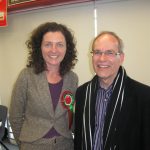 It is a big list of responsibilities, which are potentially far wider that we could have hoped for from the Super City legislation. We just have to make sure Len Brown is elected so that strong Local boards become a reality.