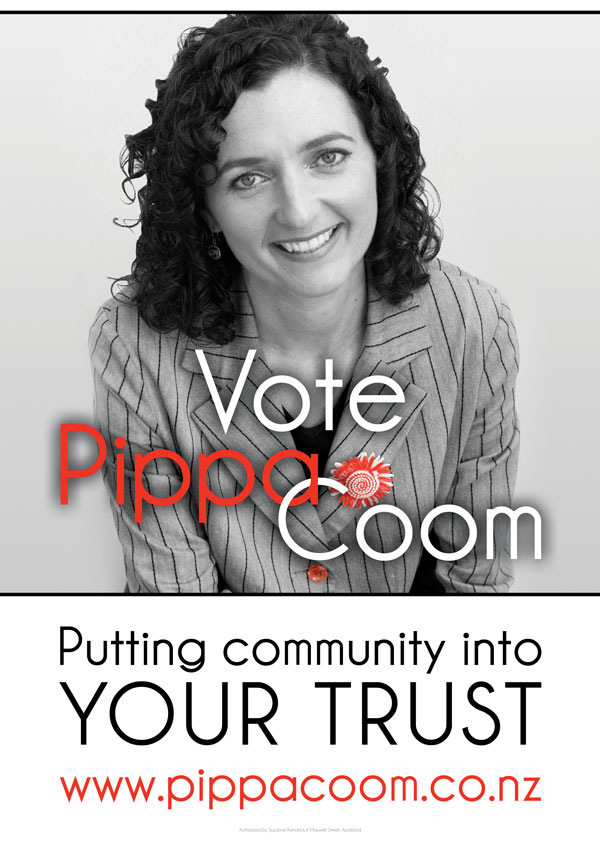 Over the last couple of weeks Aucklanders have been experiencing a higher level of visual pollution than normal due to the billboards erected by the two party tickets – PowerLynk and Citizens & Ratepayers – standing in the election of 5 trustees to the Auckland Energy Consumer Trust.

Independent candidate Pippa Coom’s billboards, which started going up today, have brought about a welcome relief to an otherwise lacklustre campaign.

“Just because it is an election with a traditionally low vote turn out doesn’t mean hoardings cannot be well designed and complement the urban environment.

My team have produced a really striking billboard that I feel proud to put up around the huge area making up the AECT electorate.” said Ms Coom.

But of course quality design is not enough to win an election, it is critical that there is substance to the message on the billboards – “Putting Community into your trust” .

“It is easy to overlook the fact AECT is a community trust because of the domination of the political parties. I wish to serve on the Trust to bring a truly community focus” said Ms Coom.

Pippa is standing with the support of Grey Lynn 2030: transition community