ETA: Making space for everyone, to get everyone moving!

In March Cycle Action Auckland hosted a think tank weekend to bring together a range of creative thinkers, politicians and journalists to join  cycling advocates in thinking about  how mainstream cycling faster and smarter.

One of the ideas to come out the think tank was Barb Cuthbert’s ‘Easy Transport Auckland’ – to put not just cycling initiatives but a range of transport projects in Auckland high on the agenda for the first ‘super city’ local government elections starting in just 5 days time.

Easy Transport Auckland has gone from idea to reality in an impressively short time.  The City’s walking, cycling and public transport advocates have formed a coalition to transform the new City’s transport system.

The official launch, which promises to be the most fun event so far this election, is happening in front of the Britomart Train and Bus Station. 2pm  Sunday, 12th Sept , QE II Square.

‘Room For Everyone, and Everyone Moving’

EHelp is on its way for voters confused by the huge choice of candidates standing for the new Auckland Council and Local Boards.  It comes in the form of a new campaign,  ‘Easy Transport Auckland – ETA’ – created for the Supercity elections by the region’s walking, cycling and public transport advocacy organizations.
The biggest issue and most urgent problem facing the Supercity that unites voters across the region is Auckland’s traffic congestion. We want to see action during the first term of the new Council to provide real options for easier travel to work, schools and other everyday trips. All modes of transport have a role to play. Our goal is ‘room for everyone , with everyone moving.’ says Barbara Cuthbert, spokesperson for Cycle Action Auckland, [one of the groups supporting ETA].

The new website for ETA, www.easytransportauckland.org.nz, identifies a range of transformational projects for trains, buses, ferries, cycling, walking, cars and freight which are the key to achieving easier transport options for the region.

‘The website invites mayoral and council candidates to register their interest in working  towards delivering these projects during their three years in office.  The public can also use the website to learn about the projects and which candidates support them, before deciding  which candidates deserve their vote.’ 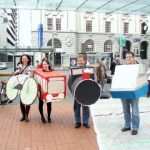 The ETA website goes live on Friday, and will be launched at a fun event at Britomart at 2pm this Sunday, 12th Sept . Two teams of candidates representing City Vision and C&R for the Waitemata and Gulf ward, wearing model trains, buses, ferries and bikes, will compete in a giant board game to reach their target of the key transformational projects.

‘We’ll see which candidates are in form to race for their goal. We would love the public to join us at Britomart to show that easy transport is at the heart of our Supercity and this election’ says Barbara.

Note – Easy Transport Auckland is the result of a coalition of Campaign for Better Transport, Living Streets Aotearoa and Cycle Action Auckland. The joint campaign is focused on the Supercity elections, and reflects the commitment of the three organizations to sustainable transport and the integration of all transport modes across for the Auckland region.