At our first meeting of the year we supported the Art Deco Society to protect the character and heritage buildings of the Wynward Quarter.

Fittingly, the next day we had our briefing from Waterfront Auckland (the newly branded Waterfront Development Agency) with the opportunity to walk around the current development happening  in the Wynyard Quarter. I was very impressed with the well thought through plans for Jellicoe Street and plaza with an appreciation of the history of the area intertwinned with the design. I particularly liked the inviting people spaces and street scape. 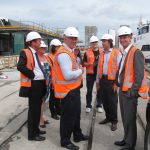 It really brought home the total disconnect of the old Auckland City Council and Viaduct Harbour Holdings in making plans to demolish half of the remaining heritage building in the design for the rest of the Quarter. A total rethink is needed by VHH Ltd.

Heritage issues throughout the central city formed the basis of last night’s meeting of the Waitemata Local Board at the Grey Lynn Community Centre.

The meeting, attended by a large number of local residents, focused on a number of significant heritage issues at the forefront of residents’ minds across the central city.

The meeting included resolutions on the reinstatement project for Three Lamps, and an acquisition proposal for Hulme Court, but the major urban transformation project under development in the Wynyard Quarter was the major focus of proceedings.

“The recent demolition of Turua Street and Coolangatta House are timely reminders of the need to protect our heritage and character buildings before the wrecking ball looms large,” says Waitemata Board Chair Shale Chambers.

“Wynyard Quarter is an area with its own character which derives from its industrial and boating building past.  It was reclaimed from the sea from 1905 and, while the buildings may not be as iconic as many of the scheduled buildings in the CBD, they are an important aspect of the life of Auckland.”

“It may not be our [the Waitemata Local Board’s] delegated authority to protect these buildings, but it is certainly our mandate.”

The board voted unanimously to support the Art Deco Society in its endeavours to preserve the Wynyard Quarter character buildings.

Other important heritage issues were also progressed at the meeting.  The reinstatement of the ‘three lamps’ to Three Lamps has finally reached a resolution after being first proposed nearly seven years ago.

It has been agreed that the location of the ‘three lamps’ will be outside the former Ponsonby Club Hotel (now the Gluepot Apartments). It is expected that work on the installation of the lamps will begin following discussions with local residents and businesses.

The Board have also asked that the Chief Executive of Auckland Council give serious consideration to bringing the category 1 status heritage building Hulme Court, currently for sale on the corner of Parnell and St Georges Bay Rd, into the public domain.

The next meeting of the Waitemata Local Board will be held at their Graham Street offices on Tuesday 8 March, at 6pm.

Mayor out to save heritage pair doomed in secret deal NZ Herald, 14 February 2011